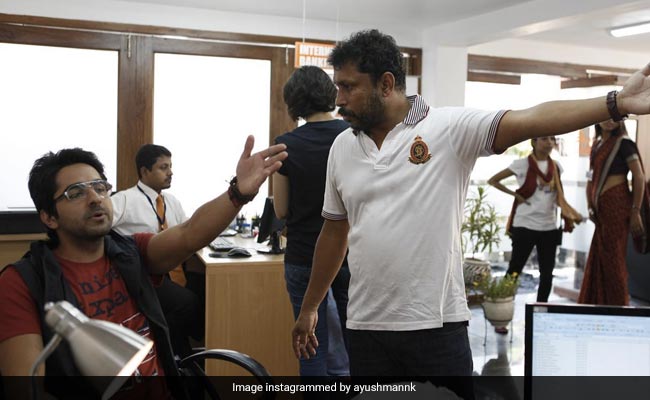 Ayushmann Khurrana and Yami Gautam‘s Vicky Donor turns 10 today. And, the actor is super happy. After all, this was his debut film. To mark the special day, Ayushmann has shared a “rehearsal shot” from the sets featuring himself and director Shoojit Sircar. The picture was clicked when the team was shooting the bank sequence. Ayushmann has mentioned that the pic is from Day 1 of the shooting schedule. He has also penned a long note for everyone on Instagram. He wrote, “Day 1. First Scene. Rehearsal shot. It’s been 10 years already? Deluge of fond memories gushing towards me, reminding me of my days of struggle, exasperation, determination, small joys and big successes.”

Expressing gratitude to his “guru” Shoojit Sircar, and producers John Abraham and Ronnie Lahiri, Ayushmann Khurrana wrote, “Thank you, my guru, Shoojit Sircar da, Ronnie Lahiri and John Abraham for trusting a rookie like me and making me believe that I can be a Hindi film hero.”  He has also added the hashtag, “10 years of Vicky Donor”. Ayushmann Khurrana’s wife Tahira Kashyap was the first one to reply with a red heart emoji.

Yami Gautam has also written a special message on the occasion. With Vicky Donor, Yami too made her Bollywood debut in a lead role. She has shared a picture clicked during her recent visit to the studio where she gave her audition for the film. Posing next to the movie’s poster, Yami wrote, “The place where it all began! Started my journey auditioning for Vicky Donor right here. Yeh sofa bhi yahi tha [This sofa was here only] A recent visit to this studio took me down memory lane, reliving so many beautiful moments through the journey. Thank you, Shoojit da and our entire team.” Actress Dia Mirza has left a red heart under the post.

Vicky Donor also featured Annu Kapoor and Dolly Ahluwalia in crucial roles. From songs to funny twists, the film was an ultimate entertainer.

Up next, Ayushmann Khurrana has Doctor G in his kitty. Yami Gautam, on the other hand, is currently basking in the success of her film Dasvi.