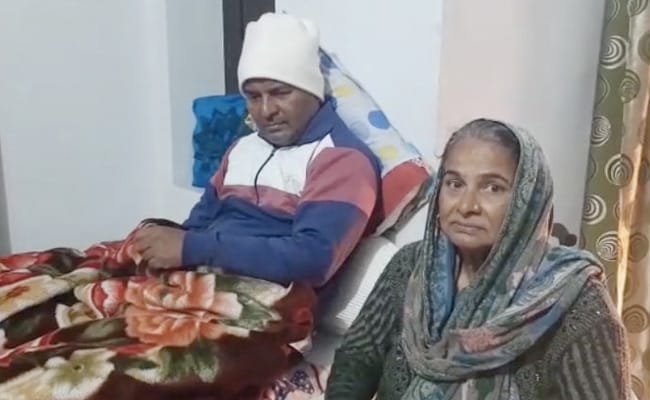 A bed-ridden Uttar Pradesh BJP MLA – among five lawmakers who quit the ruling party yesterday ahead of elections next month – has issued a statement after his daughter alleged he had been ‘kidnapped’ by his brother and ‘forced’ to join the Samajwadi Party.

Vinay Shakya is the BJP MLA from Bidhuna in UP’s Auraiya district. He and his brother, Devesh Shakya, are close to heavyweight OBC leader and minister Swami Prasad Maurya, whose jump to the opposition on Tuesday, with that of four legislators who quit the party, made headlines.

On Wednesday morning visuals emerged of Mr Shakya in bed at his Etawah home, with his elderly mother by his side. Vinay Shakya has been ailing for three years and can barely speak.

“There is no truth to what my daughter said,” he said in his brief statement.

When asked why his daughter hade made the allegation, Mr Shakya only laughed.

Hours earlier Mr Shakya’s daughter had issued a statement claiming her father had been abducted.

“You know my father was paralysed a few years back, after which he is unable to walk. My uncle, Devesh Shakya, took advantage of his illness and started doing personal politics in his name. Today, he crossed all limits… (he) took my father forcibly from our house and went to Lucknow to join the Samajwadi Party,” Rina Shakya said in a self-shot video.

“I would like to tell you we are working for the BJP and will always stand firm with the party. When my father was ill no one helped us… only Chief Minister Yogi Adityanath,” she added.

As controversy around Ms Shakya’s allegation grew, the district police chief issued a video statement of his own, in which he said the kidnap allegations were false.

“The MLA is present with his mother in Etawah town. The allegations of him being kidnapped are false. The whole incident has to do with a family conflict,” the police chief said.

The drama in the Shakya family underscores the high-stakes battle for UP – a seven-phase election that starts on February 10 with results due exactly 28 days later.

The ruling BJP, led by Adityanath, insists it is in pole position to retain power in one of the most politically crucial states.

Akhilesh Yadav and the Samajwadi Party, widely seen as having replaced the Congress as the BJP’s principal challenger in these polls, is mounting a stiff challenge backed by an umbrella of alliances with smaller parties, especially those which represent non-Yadav OBCs.

The likely cross-over of Swami Prasad Maurya, a non-Yadav OBC from eastern UP, and his aides should boost the Samajwadi Party and Mr Yadav’s efforts to return as Chief Minister.

Mr Maurya – who had quit Mayawati’s Bahujan Samaj Party for the BJP in 2016 (before the party won the 2017 election) – told NDTV the BJP worked against peoples’ interests. He also exuded confidence that – for the second time in a row – he was joining the winning side just before the election.

“…they (BJP) have worked against the people. I expressed dissent at appropriate platforms but my voice was never heard. The result is I have had to resign,” he told NDTV.

“Before I quit BSP, it was No 1 in UP. Now it is nowhere. When I joined the BJP, it came out of 14 years of ‘banwaas (exile)’ and formed a majority government,” he declared.

Mr Maurya had a running feud with Chief Minister Adityanath. Two months ago, he had complained to Home Minister Amit Shah, sources said, but nothing, apparently, came of it.