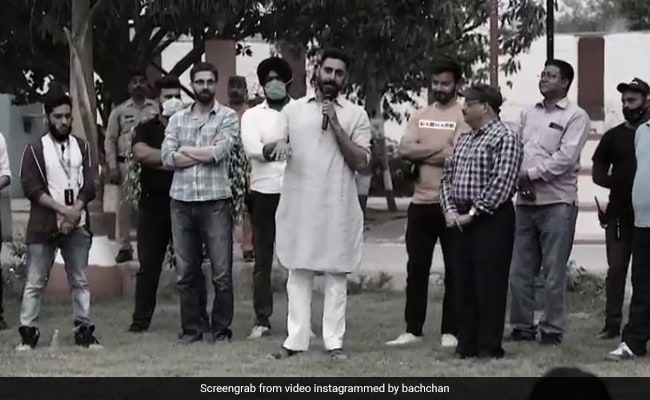 Abhishek Bachchan in a still from the video. (courtesy: bachchan)

Abhishek Bachchan is a man of his words. And, his latest post on Instagram is proof. He has shared a video from Dasvi‘s first screening. Venue? Agra Central Jail. Yes, you read that right. FYI: the movie was shot in this jail. So after the shooting was done, Abhishek had promised that once the movie is ready he will get the first screening done inside the jail. And, he stood to his words. The clip opens with a throwback moment when Abhishek addressed the jail guards and inmates. “Jaise yeh film taiyaar ho jaye, main chahunga ki jab pehli baar yeh baray parde par dikhe toh hum Agra main akaar. Aap sab k beech main baith kar yeh picture dekhay. [I wish to watch the film, once ready, for the first time with all of you here]. From the set-up for the screening to people applauding the performances on-screen, the video has perfectly summed up the entire event. Nimrat Kaur and Yami Gautam are also seen walking alongside Abhishek Bachchan inside the jail premises. And, this has happened for the first time.

Abhishek Bachchan has also written a long note on Instagram. “A promise is a promise. Last night, I managed to fulfil a commitment I made a year ago. The first screening of our film Dasvi was held for the guards and inmates of Agra Central Jail. We shot the film here. Their reactions are memories I will remember and cherish for a lifetime.”

Abhishek Bachchan‘s Dasvi will be released on April 7. The film can be streamed online on Netflix and Jio Cinema. Abhishek will be seen playing the role of   Chief Minister Ganga Ram Chaudhary. The plot revolves around Abhishek’s character who lands in prison. His performance in the peppy number Macha Macha Re has also created a lot of noise.The first track from the film was released last week.

The makers had dropped the trailer on March 24.

After watching the trailer and his son Abhishek Bachchan’s power-packed performance, veteran actor Amitabh Bachchan, in his blog, proudly announced that Abhishek is his “uttaradhikaari”.

In Dasvi, Yami Gautam will be portraying the role of a police officer. Nimrat Kaur will play Abhishek’s wife. The film is directed by Tushar Jalota.