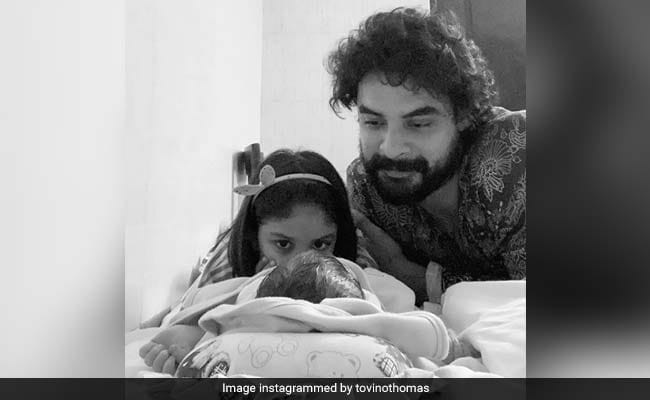 Malayalam actor Tovino Thomas and his wife Lidiya welcomed a boy on June 6. In a post on Monday night on the actor’s Instagram, the couple revealed they’ve named the baby boy Tahaan Tovino. In his post, Tovino Thomas added that they have also thought of a cute nickname for their son. Tovino Thomas and Lidiya are also parents to a daughter named Izza. Sharing a photo of himself and Izza, adorably looking at Tahaan, Tovino Thomas revealed the baby’s name in an emotional note: “Can’t take our eyes off our boy! We’ve named him ‘Tahaan Tovino’. And we’ll call him ‘Haan’. Thanks for all the love and wishes. Lots of love!” Aww, how cute is that?

Here’s just a glimpse of baby Tahaan in this photo shared by Tovino Thomas.

On the morning of June 6, Tovino Thomas made the baby announcement with a simple post. “It’s a boy,” read his post, which he captioned with a halo emoticon. Malayalam stars such as Prithviraj Sukumaran and Antony Varghese were the first ones to congratulate Tovino and Lidiya.

Tovini Thomas and Lidiya had a big fat wedding with a star-studded guest list in Kochi October 2014. The couple welcomed their first child – daughter Izza Thomas – in 2016. Izza often takes over her father’s Instagram.

Tovino Thomas is best known for films such as Godha, Guppy, Lucifer, Luca and Ennu Ninte Moideen. This year, Tovino Thomas was seen in Forensic, which released in February before the lockdown began. His new film Kilometers & Kilometers was initially supposed to release on March 12 but has been postponed indefinitely because of the coronavirus lockdown.