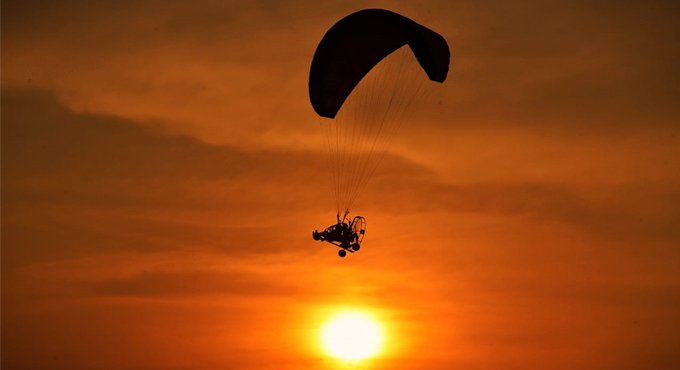 During the five-day festival many events like flying of hot air balloons, sky diving and remote controlled para motor flying would be organised

Mahabubnagar: The five-day national aero sport and paramotor adventure championship was off to a colourful start in the district headquarters. Speaking on the occasion, Tourism Minister V Srinivas Goud, who was the chief guest, said, “Mahabubnagar, which was earlier known to be a drought-prone district has registered an impressive growth in recent times on all fronts,” he said.

The Minister appealed the people of Mahabubnagar to participate in aero sport and paramotor adventure shows in large numbers. The Minister further said that the government was planning to set up a para motor adventure training centre in the district headquarters.

“After the formation of Telangana state, the government accorded priority to Tourism sector. Mahabubnagar, which was hitherto known as the most backward district with least literacy rate was now surging ahead on all development parameters after completion of the irrigation projects and initiation of different developmental activities,” he said.

As part of development of tourism, the Aero Sport and Paramotor Championship was being organised in Mahabubnagar district from January 13 to 17. As part of this, 11 paramotor pilots from 10 states are participating in the event.

Hot Air Balloons,Sky Diving and Remote controlled para motor adventures will be conducted in the five day event from 6 am to 6 pm every day. In view of the availability of land, water and aqua facilities the Aero Sports Paramotor Adventure Training centre would be established in Mahabubnagar, between Karvena and Udandapur reservoirs. District Collector S Venkat Rao and others participated.

Now you can get handpicked stories from Telangana Today on Telegram everyday. Click the link to subscribe.