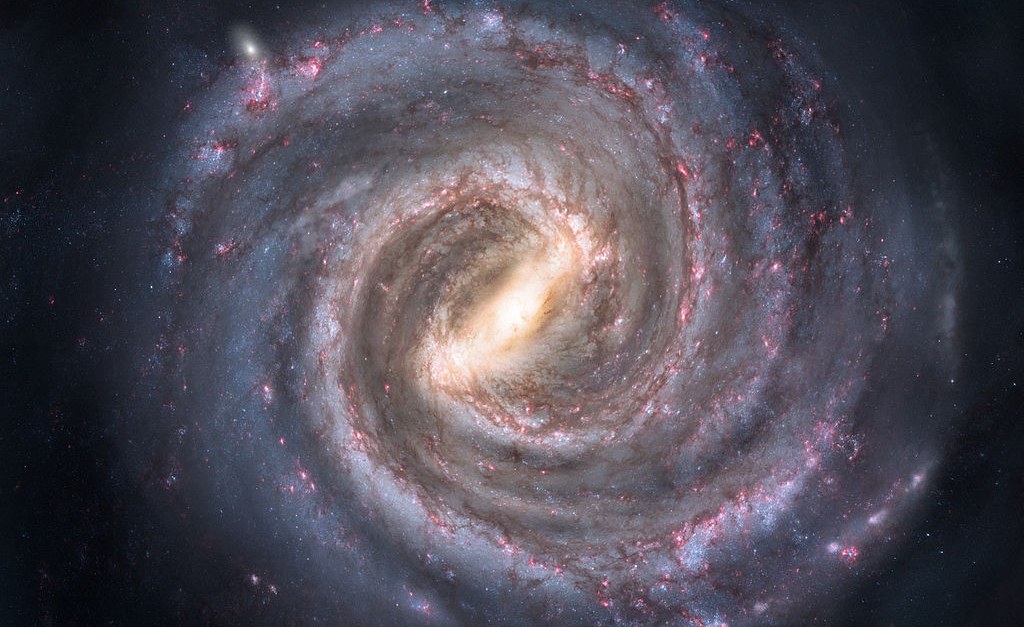 Astronomers have revealed the first image of the black hole at the centre of our galaxy, the Milky Way. The image was produced by the Event Horizon Telescope (EHT) Collaboration, an international team made up of over 300 scientists on five continents – including Africa.

Black holes were predicted by Albert Einstein’s General Theory of Relativity over a century ago. They are regions of space so dense that nothing, including light, can escape. Their boundary is known as the event horizon, which marks the point of no return. That’s just one of the reasons these objects are hidden from our eyes. The other is that they are exceedingly small, when placed in their cosmic context. If our Milky Way galaxy were the size of a soccer field, its black hole event horizon would be a million times smaller than a pin prick at centrefield.

How, then, can one photograph them? Our team did so by capturing light from the hot swirling gas in the immediate vicinity of the black hole. This light, with a wavelength of 1 millimetre, is recorded by a global network of antennas that form a single, Earth-sized virtual telescope.

The light looks rather like a ring, a characteristic signature that is the direct consequence of two key processes. First, the black hole is so dense that it bends the path of light near it. Second, it captures light that strays too close to the event horizon. The combined effect produces a so-called black hole shadow – a brightened ring surrounding a distinct deficit of light centred on the black hole. In the case of our Milky Way black hole, this ring has the apparent size of a doughnut on the moon, requiring an extraordinary engineering effort to bring it into focus.

The unveiling of an image of our black hole, Sagittarius A*, is not just a massive moment for science. It could also be an important catalyst for diversifying African astrophysics research using existing strengths. We were the only two of more than 300 EHT team members based on the African continent. The continent doesn’t host any EHT telescopes – we were brought on board because of expertise we’ve developed in preparation for the world’s largest radio telescope, the Square Kilometre Array (SKA), to be co-hosted by South Africa and Australia.

Why the image is important

This is not the first time a black hole image has captured people’s attention. We were also members of the team that captured the first ever image of a black hole in 2019 (this one is at the centre of a different galaxy, Messier 87, which is 55 million light years away). It has been estimated that more than 4.5 billion people saw that image. Sagittarius A* has also dominated headlines and captured people’s imaginations.

But there’s more to this result than just an incredible image. A plethora of rich scientific results has been described in ten publications by the team. Here are three of our primary highlights.

First, the image is a remarkable validation of Einstein’s General Theory of Relativity. The EHT has now imaged two black holes with masses that differ by a factor of over 1000. Despite the dramatic difference in mass, the measured size and shape are consistent with theoretical predictions.

Second, we have now imaged black holes with very different environments. A wealth of prior research over the past two or three decades shows strong empirical evidence that galaxies and their black holes co-evolve over cosmic time, despite their completely disparate sizes. By zooming into the event horizon of black holes in giant galaxies like M87, as well as more typical galaxies like our own Milky Way, we learn more about how this seemingly implausible relationship between the black hole and its host galaxy plays out.

Third, the image provides us with new insights on the central black hole in our own galactic home. It is the nearest such beast to Earth, so it provides a unique laboratory to understand this interplay – not unlike scrutinising a tree in your own garden to better understand the forests on the distant horizon.

As has been the case with the country’s key role in paleoanthropology, there are contributions to global astronomy that can only be made from South African soil. Sagittarius A* lies in the southern sky, passing directly above South Africa. That is a major reason why this image of the Milky Way’s centre, taken by the MeerKAT (a precursor to the SKA) is the best there is.

Get the latest in African news delivered straight to your inbox

We need to confirm your email address.

To complete the process, please follow the instructions in the email we just sent you.

There was a problem processing your submission. Please try again later.

South Africa also has well-established infrastructure at its astronomical sites, which are protected by legislation. And it has world-class engineers at the forefront of their craft. This makes for low-cost, high-performance telescopes delivered on time and to budget.

New technology is also on our side: a cutting-edge simultaneous multi-frequency receiver design, pioneered by our Korean colleagues, means that EHT sites no longer need to be the most pristine, high-altitude locations on Earth.

All the elements are in place for a dramatic increase in the number of young Africans who participate in this new era of black hole imaging and precision tests of gravity. In the coming years, we hope to be writing about findings that couldn’t have been made without technology on South African soil, as well as African scientists leading high-impact, high-visibility EHT science in synergy with our multi-wavelength astronomy and high-energy astrophysics programmes.