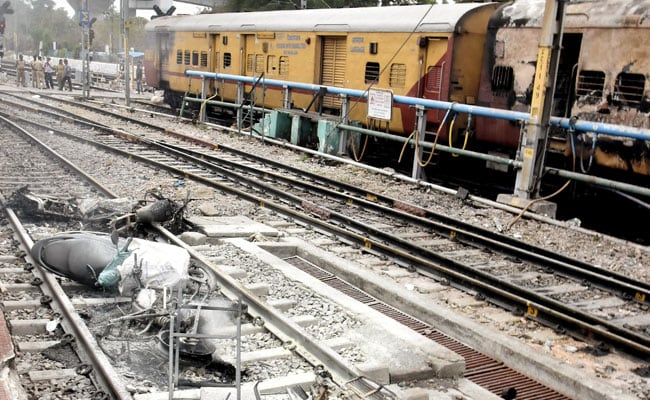 340 trains have been affected due to the nationwide protests against the Agnipath recruitment scheme.

At least 250 people have been arrested in Uttar Pradesh over the ‘Agnipath’ protests, which has seen hordes of angry youth, carrying bamboo sticks and stones, storming railway premises across cities and small towns and laying siege to highways.

Meanwhile, protests against ‘Agnipath’ left Bihar in flames on Friday when rampaging mobs set fire to dozens of railway coaches, engines and stations and torched BJP offices, vehicles and other property, prompting the police to suspend internet services in nearly a third of the state.

Here are the LIVE updates on the ‘Agnipath’ protests:

Get NDTV UpdatesTurn on notifications to receive alerts as this story develops.

The Chennai Police on Saturday detained around 300 youngsters who protested against the Centre’s ‘Agnipath’ scheme.

Many of the youngsters who have been detained claim that they had already given the exams and were just waiting for other formalities to get enlisted into the services.

The protesters were gathered at the War memorial in Chennai when the police detained them.

As protests against the ‘Agnipath’ scheme intensified, Defence Minister Rajnath Singh on Saturday strongly defended the new military recruitment model saying it was rolled out after wide-ranging consultations including with the ex-servicemen and suggested that a “misunderstanding” is being spread for political reasons.

He said the scheme will bring revolutionary changes in the enrolment process for soldiers, asserting that there will be no compromise on the quality of training to be imparted to the personnel to be recruited under the scheme.

“The Union Government has failed to comprehend that a jawan supports not only himself but his family,” wrote Mr Chadha in a statement.

Train services on the Sealdah-Barrackpore route in West Bengal’s North 24 Parganas district were disrupted for around one hour on Saturday as a group of anti-Agnipath agitators blocked railway tracks and did push-ups to register protest against the new scheme for recruitment in armed forces.

Around 20 protesters blocked both up and down lines at a level crossing from around 10 AM thus also affecting vehicular traffic, a spokesperson of the Eastern Railway said.

“We love our country, please don’t play with our future. We have been preparing for the army for several years, and now the Centre implements Agnipath scheme. We demand its immediate rollback,” one of the protesters, carrying ‘Boycott Agnipath’ placard, told reporters, as quoted by ANI.

Protests against the ‘Agnipath’ scheme intensified in Bihar’s Jehanabad district on Saturday with angry protesters throwing stones at policemen.

A large number of protesters blocked the Tehta Mela Road under Tehta OP and pelted stones at policemen who were present at the spot to control the situation.

Several policemen have been injured in the incident.

Hundreds of youth on Saturday took out a massive protest march in Kerala against the Centre’s decision to implement the new Agnipath scheme for the recruitment of soldiers, airmen and sailors.

Large number of army job aspirants, who have been reportedly waiting to get enrolled into the defence service, gathered at Thampanoor, located in the heart of the city, in the morning and marched to Raj Bhavan, the official residence of Governor Arif Mohammed Khan.

They could be seen raising slogans against the Union government’s new military recruitment scheme and holding placards and banners urging the authorities to withdraw their decision at the earliest.

The protesting youth were reportedly hailing from various parts of the southern state.

An agitating man said they would continue the strike till the Centre rolls back its decision and justice is ensured to them.

Indian authorities suspended Internet services in 18 districts of Bihar in a bid to stop public gatherings and violent protests over a military recruitment plan, police officials said on Saturday.

One protestor was killed and more than a dozen have been injured in a series of protests in some regions of the country against Prime Minister Narendra Modi’s new policy to hire soldiers for short tenures.

The Agnipath or “path of fire” system aims to bring more people into the military on four-year contracts to lower the average age of India’s 1.38 million-strong armed forces and cut burgeoning pension costs, the government said.

Protesters, mainly young men, say the plan will limit opportunities for permanent jobs with the defence forces, which guarantee fixed salaries, pensions and other benefits.

Congress leader Rahul Gandhi on Saturday said that just as Prime Minister Narendra Modi had to withdraw the farm laws, he will have to accept the demand of the youth and rollback the Agnipath defence recruitment scheme.

The former Congress chief also said that for eight consecutive years, the BJP government has “insulted” the values of ‘Jai Jawan, Jai Kisan’.

In a tweet in Hindi, Mr Gandhi said, “I had said earlier also that the prime minister will have to withdraw the black farm laws.”

“In the same manner, he will have to accept the demand of the youth of the country by becoming ‘maafiveer’ and take back the ‘Agnipath’ scheme,” he said.

Train services at Secunderabad Railway Station, which witnessed arson and violence resulting in the death of a protester aspiring to join the armed forces, are limping back to normalcy, a senior official of the South Central Railway said on Saturday.

D Rakesh, a 24-year-old Army aspirant from Warangal district, died and several people were injured after security personnel opened fire on hundreds of agitators at the Secunderabad railway station here on Friday as the protests against the Centre’s new Agnipath military recruitment scheme escalated into large-scale violence and arson.

Violence and protests marred the station blocking rail services causing inconvenience to passengers for several hours. Train operations originating from the station were cancelled or partially cancelled and they resumed subsequently later in the evening.

Congress MPs and leaders will sit on a “Satyagraha” at the Jantar Mantar in New Delhi Sunday morning in solidarity with the youths protesting against the Agnipath scheme for recruitment in the armed forces.

Youths across the country have taken to the streets against the contentious scheme, and incidents of violence have been reported from several cities and towns.

Sources said Congress MPs, its working committee members, and All India Congress Committee office-bearers will be part of the “Satyagraha” that begins at 10 AM at Jantar the Mantar on June 19.

Fresh violence erupted in Uttar Pradesh’s Jaunpur as protests against the ‘Agnipath’ scheme intensified on Saturday.

Large number of protesters blocked a national highway and vandalised vehicles. A government bus was also set on fire by angry protesters.

Police forces have been deployed to control the situation.

Delhi Environment Minister Gopal Rai on Friday said that a joint movement will be held at Jantar Mantar in the national capital on June 20 against the recently announced Agnipath Recruitment Scheme by the Central Government.

“A joint movement will be organized at Jantar Mantar in Delhi at 11 am on June 20 against the Agnipath scheme,” he said in a tweet.

He has also appealed to all the organizations of ‘Syukt Rojgar Andolan Samiti’ to reach Jantar Mantar.

Protests have broken out in various parts of the country against the new recruitment scheme in the Armed Forces. In some places, the protests turned violent as trains were set ablaze.