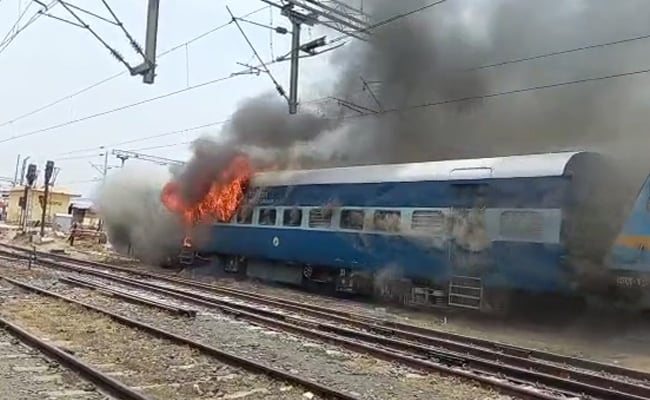 Police had to fire tear gas shells at the aggressive protestors in Arrah.

Protests against Agnipath, a radical recruitment plan for the armed forces, turned violent today as Army aspirants disrupted rail and road traffic in several parts of Bihar for the second consecutive day. Trains were set afire, rail and road traffic disputed, window panes of buses smashed, and passersby, including a ruling BJP MLA, pelted with stones by angry youth demanding the withdrawal of the new short-term recruitment scheme. Violent protests have now spread to multiple states across the country.

22 trains had to be cancelled and five had to stop after completing partial journeys, East Central Railway said.

In Nawada, the vehicle of BJP MLA Aruna Devi, who was on her way to a court, was attacked by the agitators who hurled stones at her car, leaving five persons, including the legislator, injured. The BJP office in Nawada was also vandalised.

“The protesters seemed to have been provoked by the sight of the party flag, fitted on my car, which they tore. My driver, two security guards, and two personal staff members have sustained injuries,” the MLA told reporters, adding that she was “too shaken” to have registered a police complaint.

At the railway station in Arrah, police had to resort to tear gas shelling to disperse a huge crowd of protestors who pelted stones at the police. Visuals showed railway staff using fire extinguishers to put out a fire caused by protesters throwing furniture on the tracks and setting them alight.

In Jehanabad, students pelted stones injuring several people including cops who chased them away to clear the railway tracks where they had camped to disrupt rail traffic. Dramatic visuals from the railway station showed the police and protesting students pelting stones at each other. The cops also pointed their guns at the protesters to scare them away.

In Nawada, groups of young men burnt tyres at a public crossing and raised slogans demanding the rollback of the tour of duty scheme. They also blocked the railway tracks at the Nawada station and burnt tyres on the track. Visuals from the spot show a huge crowd damaging railway property and shouting expletives at PM Modi. Many can be seen doing pushups on the railway tracks while the police try to appeal for peace through a handheld public address system.

Agnipath, the tour of duty scheme, proposes the recruitment of jawans on a contractual basis for a four-year period followed by compulsory retirement for most without gratuity and pension benefits. The new recruitment plan aims to cut down the government’s massive salary and pension bills and free up funds for arms procurement.

In Saharsa, students flocked to the railway station and pelted stones when the police tried to chase them away to prevent rail traffic disruption.

Protests have been reported from several parts of neighbouring Uttar Pradesh as well.

Yesterday, protests broke out in Bihar’s Muzaffarpur and Buxar with the protesters asking what they will do after four years.

Under the Agnipath scheme, about 45,000 people between the age of 17.5 years and 21 years will be inducted into the services for a four-year tenure. During this period, they will be paid a monthly salary between Rs 30,000-40,000 plus allowances. They will also be entitled to medical and insurance benefits.

After four years, only 25 per cent of these soldiers will be retained and they will go on to serve for a full 15 years in non-officer ranks. The remaining will exit the services with a package between Rs 11 lakh – Rs 12 lakh, but won’t be eligible for pension benefits.

Under the old system, youths aged between 16.5 and 21 years were selected for a minimum of 15 years of service and used to get a pension after retirement.

The new policy has drawn criticism and questions from several quarters, including a section of veterans. Critics have argued that a four-year tenure will hit fighting spirit in the ranks and make them risk-averse.

Among the veterans, Major General BS Dhanoa (retired) tweeted, “Two serious recommendations to the just-announced recruitment policy for the armed forces; a. Increase the service period of new recruits to a min of seven years b. Make the retention of those keen to serve longer at least 50 per cent.”