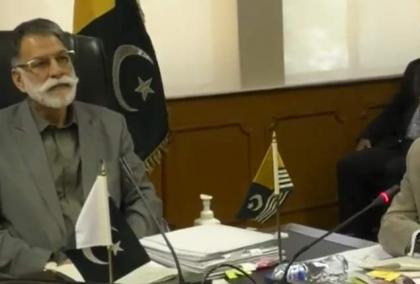 The cabinet decided to collect the data of beneficiaries under Ehsas program and to follow the patron of the Federal government in this regard. The meeting decided to introduce a one dish system in weddings and other social functions in the state and to fix the maximum time of celebrations till 10:00 p.m.

The cabinet was apprised of the progress made so far by the Committee on Amendments to the Accountability Act and directed the committee to finalize the recommendations at the next meeting. A detailed briefing was given to the cabinet by the committee to effectively follow up the pending cases in the court.

He said only by putting his vision and thinking into practice Azad Kashmir will be made a truly welfare state and the concept of good governance can only be achieved through the spirit to serve the people.

The AJK prime minister said that the welfare of widows and orphans is the responsibility of the government and the government will also fulfill its responsibility to provide relief to the destitute and in this regard data of deserving persons across the state should be collected in a transparent manner so that no deserving person is deprived of it.

He directed the secretaries to the government to maintain close liaison with the people and find out their problems so that the problems of the people could be resolved on priority basis.

He urged the international human rights organizations in general and Geneva Human Rights Council in particular to play their leading role in the release of Khurram Pervez.

The cabinet meeting prayed for upholding of the status of the Kashmir freedom movement martyrs, martyrs of Armed Forces of Pakistan and Martyrs of Neelum valley in Jannah.