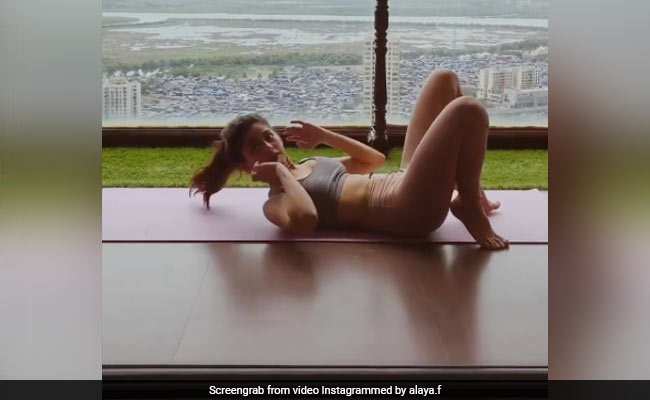 Alaya in a still from her Instagram video (courtesy alaya.f)

Actress Alaya Furniturewalla, who previously told us that she’s taken a keen interest in yoga in the past few months, tried a new yoga posture and did pretty well. A for effort. On Instagram, Alaya shared a detailed video of her attempting a complicated yoga posture with a disclaimer, saying her video cannot be equated with a tutorial as she’s simply only trying it for the first time. “This is not a tutorial! It’s just 3 minutes of me struggling,” Alaya captioned her video, in the first half of which she can be seen trying to figure out a step by step procedure to perfect the pose. After multiple failures and bloopers, Alaya finally felt confident to give it a try at one go and voila! She did it!

While posting the video, Alaya added this to her caption: “I’ve never really done yoga in my life but it’s been one of my favourite lockdown activities to find yoga videos and poses and try and recreate them. I’m a big believer in doing things over and over and over again until I get it, so here’s a little glimpse into that! Please don’t try this at home unless you know what you’re doing. Don’t be like me.”

Earlier, Alaya had written: “It’s become my new favourite thing to find cool yoga videos and get super excited when I’m able to do what they’re doing.”

Her feed is also full of epic failures, which she shares with her fans anyway because she’s cool like that.

Alaya is the daughter of Pooja Bedi and her ex-husband Farhan Furniturewalla. Alaya made her Bollywood debut this year with Jawaani Jaaneman, in which she co-starred with Saif Ali Khan and Tabu.