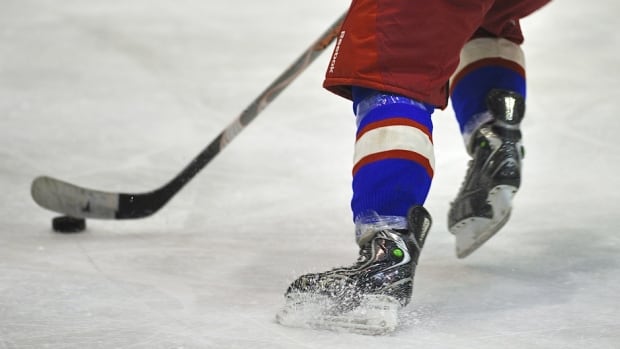 Students attending Calgary’s Edge School are some of the only people in the province allowed to continue playing hockey and skating at an indoor rink.

Recreational and competitive sports have been shut down since the end of last year as part of restrictions introduced by the province to limit the spread of COVID-19.

But there are always exceptions — and that’s causing some friction in the province’s hockey community.

The private sports school is well within their rights to have students on the ice, according to the province.

In an emailed statement, Ed Polhill, the principal of the school, said Edge students are participating in physical education and sports performance programming at school facilities, which are allowed to be open for those purposes.

“There is no special exemption for our school. The same rules exist for all schools in the province,” he said.

Edge is one of the only schools in Alberta with a private rink. And some, like Sean McCarry — who owns the Hockey Development Center in Calgary — said this loophole deepens inequity in sports.

“You’ve got the general population, has the kids kind of stuck at home,” he said. “They’re back in school right now. They can’t go skating and can’t play hockey … then, you know, you get wind of a certain select group, whether it’s an international group or whether it’s a bunch of Edge kids who are skating.

McCarry said this causes concerns on two fronts. One of his concerns is whether kids are getting exercise and having fun while others can’t.

“The second one is, if your kid is in the comparative stream, parents are going, ‘Well, that’s great. My kid is trying to make the same team or get to the same end point as the Edge kid, but he’s going to sit here and the Edge kid is going to be playing for a year,'” he said.

“That’s causing grief and anger among both the recreation groups and competitive groups.”

The province said if a school has its own rink, they can continue if all other health measures are followed.

“However, if the school needs to access an indoor rink elsewhere, then it can not occur as they are currently closed to the public under the current measures,” said a spokesperson with Alberta Health in a statement.

Both the Calgary Board of Education and Calgary Catholic School District (CCSD) said their sports programs have all been shuttered for the time being.

“We do not have any sport programs running at the moment. Our hockey program has also been suspended until further notice,” said CCSD spokeswoman Sandra Borowski.

The province said it does not keep track of how many schools may offer a specialized program, such as a sports academy, or have their own private sports facilities.

McCarry said from his perspective, the province’s restrictions on sports and sports facilities are “nonsensical.”

“The ski hills can have 1,200 people in line, some sports schools allowed to be open, you can skate with 600 people at Bowness — but a hockey rink or a dance studio can’t even rent their space out to one person,” he said.

“People are looking around going, ‘This doesn’t make any sense whatsoever,'” he said. “And that’s what’s frustrating a lot of people in this industry, including myself.”