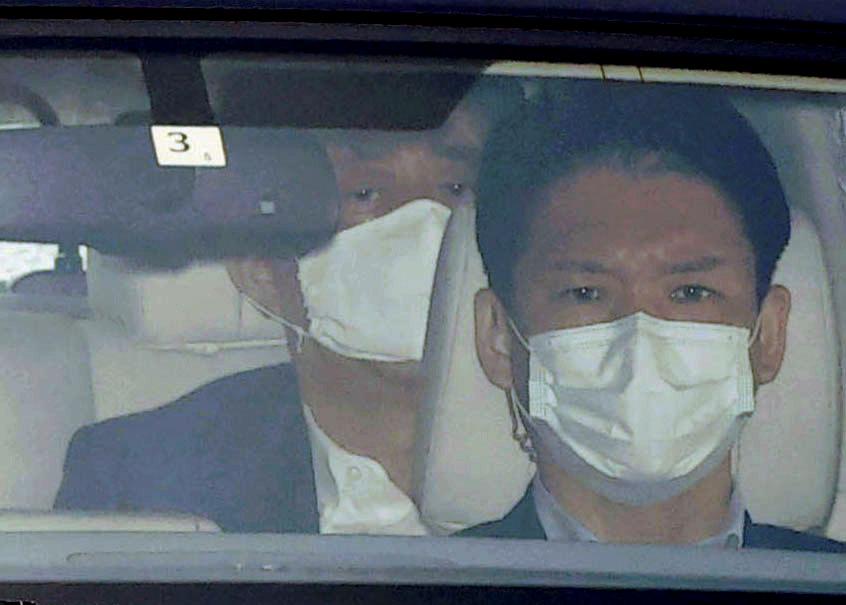 TOKYO (Reuters) – A motorcade carrying Japanese Prime Minister Shinzo Abe entered a Tokyo hospital on Monday again stoking concerns about his ability to continue as leader due to health issues and fatigue from handling the coronavirus crisis.

Japanese Prime Minister Shinzo Abe arrives by a car at Keio University Hospital, amid speculation about his health, in Tokyo, Japan, in this photo taken by Kyodo, August 24, 2020. Kyodo/via REUTERS

Abe will receive the results of a medical check-up from a week ago, local media said citing government sources. Abe underwent an examination that lasted seven-and-a-half hours, fuelling worries about his health.

“This time it’s to hear the results of the medical check-up,” an anonymous government official told the Yomiuri newspaper.

Dozens of reporters watched as a black sedan with white curtains carrying Abe on the back seat arrived at the hospital.

Abe, already the country’s longest-serving prime minister, surpassed a half-century-old record set by his great-uncle Eisaku Sato for the longest consecutive tenure as premier on Monday, adding to speculation he may resign after reaching the milestone.

Abe, in office since 2012 in his second stint as prime minister, resigned from his first term in 2007 because of struggles with ulcerative colitis, which he now keeps under control with medication that was not previously available.

Abe has suffered a slide in public opinion polls to one of the lowest levels since he took power due to what respondents see as his haphazard handling of the coronavirus and a string of scandals.

Japanese media have speculated about Abe’s health this month, including detailed reports on Abe’s walking speed. Weekly magazine Flash said Abe had vomited blood at his office on July 6. Reuters was unable to verify the widely cited report, which was refuted by government officials.

The prime minister’s office did not give a detailed explanation of his hospital visit last week, but Health Minister Katsunobu Kato, a close aide, said it was a regular check-up and he was “not at all” worried about Abe’s health.

Abe gets a regular check-up twice a year, with his most recent on June 13, Kyodo news agency said, adding that last week’s visit was a follow-up to the June check-up, citing a hospital source.

If Abe is incapacitated, Deputy Prime Minister Taro Aso, who doubles as finance minister, will take over temporarily as acting prime minister.

If Abe says he has decided to resign, he will remain in the post until formally replaced, which requires a ruling Liberal Democratic Party presidential election followed by the winner’s formal election in parliament.