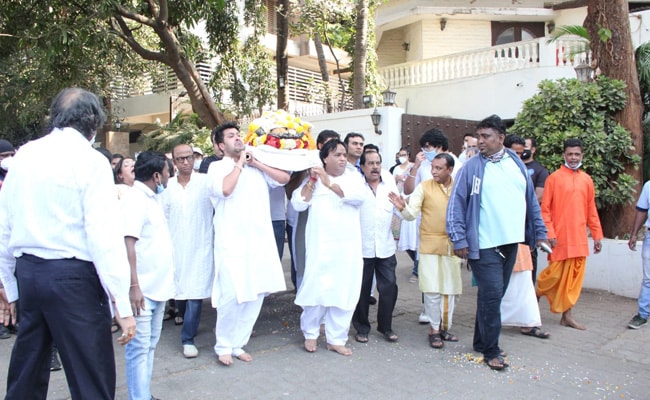 Bappi Lahiri’s last rites began on Thursday morning, after his son Bappa Lahiri landed in Mumbai from the US with his family this morning. Bappi Lahiri’s son Bappa was pictured at the funeral. Besides members of the Lahiri family, filmmaker Biswajit Chatterjee, Rani Mukerji’s brother Raja and actor Sharbani Mukerjee paid their last respects to the singer-composer at his funeral. Sharbani was accompanied by her brother Samrat. They were also pictured at the Lahiri residence on Wednesday afternoon. Bappi Lahiri, who had been in hospital for a month, where he was being treated for multiple health issues, died of sleep apnea on Tuesday night, news agency PTI reported.

Bappi Lahiri’s son Bappa Lahiri, who stays in the US, landed in Mumbai this morning.

Bappa Lahiri at the airport.

Bappi Lahiri is survived by his wife, son Bappa and daughter Rema. Bappi Lahiri was best-known for delivering hits in several films of the late 1970s-80s like Chalte Chalte, Disco Dancer, and Sharaabi, to name a few. His last Bollywood song was titled Bhankas was for the 2020 film Baaghi 3, starring Tiger Shroff and Shraddha Kapoor. The veteran singer also made an appearance during an episode of the last season of the TV reality show Bigg Boss 15, where he arrived as a guest.