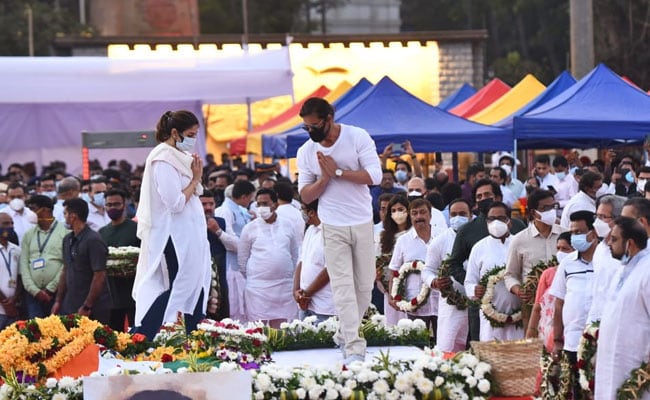 Shah Rukh Khan, Aamir Khan, accompanied by daughter Ira, led the Bollywood tributes at Lata Mangeshkar’s funeral on Sunday in Mumbai. The legendary singer, 92, died in Mumbai’s Breach Candy Hospital, where she was being treated for COVID-19 and pneumonia. She was given a funeral with state honours on Sunday evening. Lata Mangeshkar’s last rites were attended by several dignitaries including Prime Minister Narendra Modi. The film fraternity turned out to pay their respects, among them actor Shah Rukh Khan.

Vidya Balan was present to pay her last respects as well.

Shraddha Kapoor, who is related to Lata Mangeshkar, was at the funeral and also visited the hospital on Saturday evening.

Shraddha Kapoor was pictured at the funeral as well as Lata Mangeshkar’s house.

Lata Mangeshkar, known as the ‘Nightingale of India,’ had sung in Hindi, Marathi, Bengali and other regional languages. She was honoured with the Bharat Ratna, Padma Vibhushan, Padma Bhushan and Dadasaheb Phalke Award as well as several National and Filmfare Awards. Lata Mangeshkar’s last complete album was for 2004 Bollywood release Veer-Zaara.