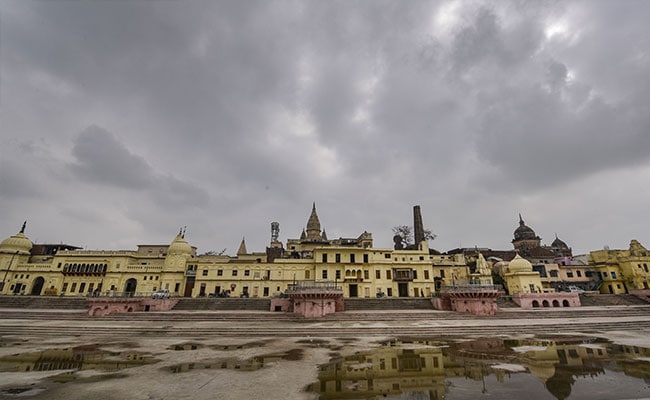 Ayodhya’s famous temples will be reopening on Monday after over two months of coronavirus lockdown, days after the centre allowed places of worship to open as part of what it called “Unlock 1”. But there is a question mark on just how much footfall they will see in the initial days with travel still restricted and the government making repeated appeals for senior citizens and children not to step out of home unless absolutely necessary.

The most prominent spot to open up again in Ayodhya will be the temporary temple of Lord Ram inside the Ram Janmabhoomi or Lord Ram’s birthplace. In March, UP Chief Minister Yogi Adityanath had presided over a ceremony to move the idol of Lord Ram from a tin structure where it was kept for decades to a new fiber one. The Chief Minister had visited Ayodhya just hours after Prime Minister Narendra Modi announced a 3-week lockdown.

This new place of worship will open for devotees starting tomorrow morning with all social distancing and other norms. The earlier tin structure could also be accessed by devotees with many security restrictions – all those restrictions, and more will apply to the new set up too.

Just before the COVID -19 pandemic hit India, a trust formed by the centre to oversee the construction of a Ram Temple in the town had indicated that a foundation stone for the temple would be laid by April this year and that Prime Minister Narendra Modi would be invited for this ceremony to Ayodhya. Those plans are now delayed and it is unclear when a new date for the beginning of construction will be set.

In November last year, the Supreme Court ruled that the then disputed land in Ayodhya would be given to a government-run trust for the building of a temple for Lord Ram and Muslims will be given a five-acre “suitable” plot elsewhere in the district, in a landmark verdict in a religious and political flashpoint that cast a shadow over the country for decades. The five-judge constitution bench delivered a unanimous verdict amid appeals for peace by political and religious leaders and heightened security across the country.

Also reopening in Ayodhya is the famous Hanuman Gadhi temple that sees a footfall of lakhs of people each year. The temple was sanitised on Sunday and circles for social distancing also marked on the floor.

However, in Mathura – the west UP town also famous for its landmark temples – many of the prominent places of worship will remain closed over concerns over the pandemic.

“To stop the spread of the dangerous coronavirus we have decided to keep the temple shut till June 30. Only employees of the temple trust will be allowed inside,” a statement from the management of the famous Banke Bihari temple said.