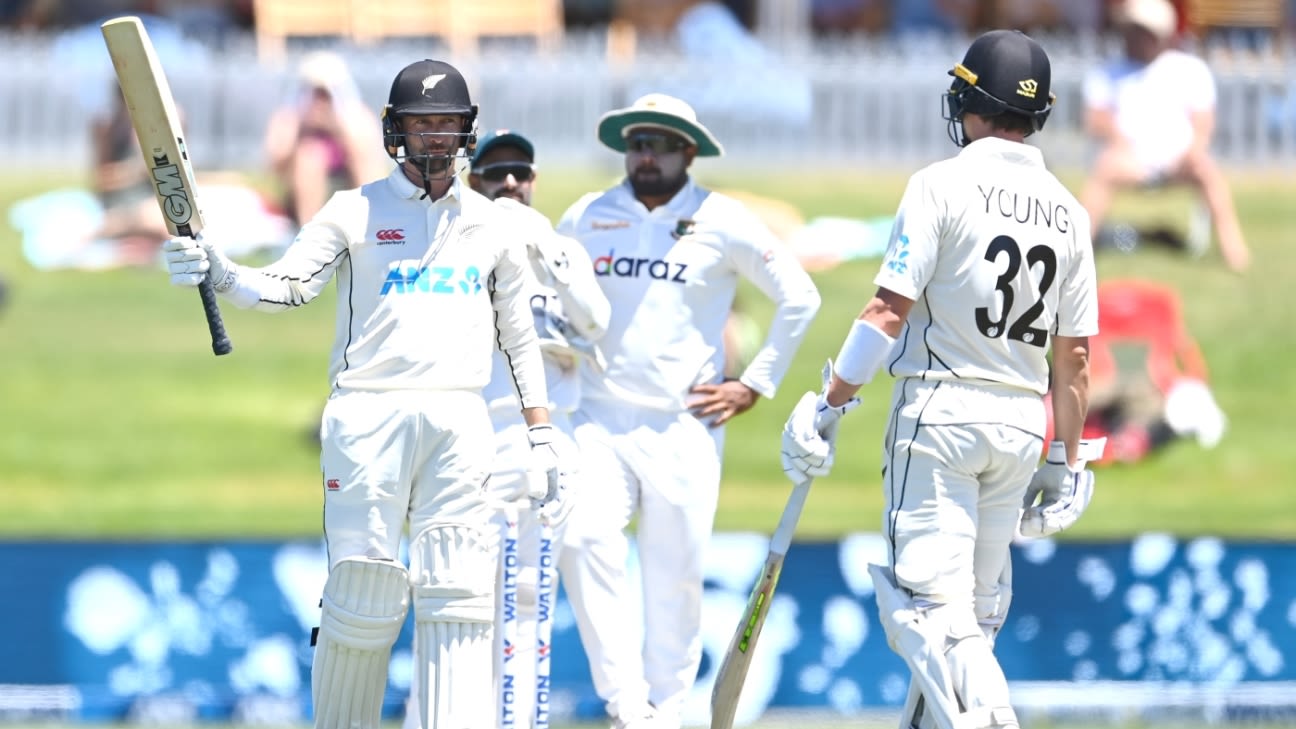 Bangladesh were lucky to remove Will Young but otherwise it was New Zealand’s session after lunch. They moved to 147 for 2, with Devon Conway unbeaten on 88 off 158 balls, having struck 13 fours and a six.

Things could have been different: Bangladesh could have had a wicket within four balls in the second session. Left-arm pacer Shoriful Islam got Young’s outside edge with a beautiful delivery but neither bowler nor wicketkeeper appealed. A few overs later, Conway reached his fifty with a six off Mehidy Hasan Miraz, who he then went on to tonk for two more fours in the same over.

Young, who was on 27 when Bangladesh didn’t appeal, struck three more fours before reaching his fifty. Conway had struck a handful of fours of his own during this time, but the pair ran into trouble in the 49th over – literally – as Young was run out for 52 attempting a quick single. As run-outs often are, this was quite unnecessary, and it was against the run of play – New Zealand were cruising at 139 for 1.

Bangladesh began the Mount Maunganui Test very well when Shoriful Islam removed Tom Latham, who averaged 93.40 against Bangladesh before this Test, in the fourth over. Shoriful got one to nip back into Latham, whose inside edge struck the pad before looping towards first slip. But the ball wouldn’t have carried, so Liton Das dived to his left to complete the catch.

Young and Conway, getting together in the fourth over, started from scratch by leaving a lot of deliveries and measuring up which lengths were the ones to attack.

Taskin and Shoriful tested them during their first spells, constantly bowling outside off stump to both left and right-hander. Taskin showed why he is already being considered the leader of the bowling attack in Shakib Al Hasan’s absence, while Shoriful’s ability to take the ball away from the left-hander caused confusion in Latham and Conway.

It took New Zealand till the tenth over to get their first boundary but shortly after the first-hour mark, the fours began to come more regularly. Ebadot didn’t bowl as good a first spell as the other fast bowlers, which perhaps allowed New Zealand to get away.