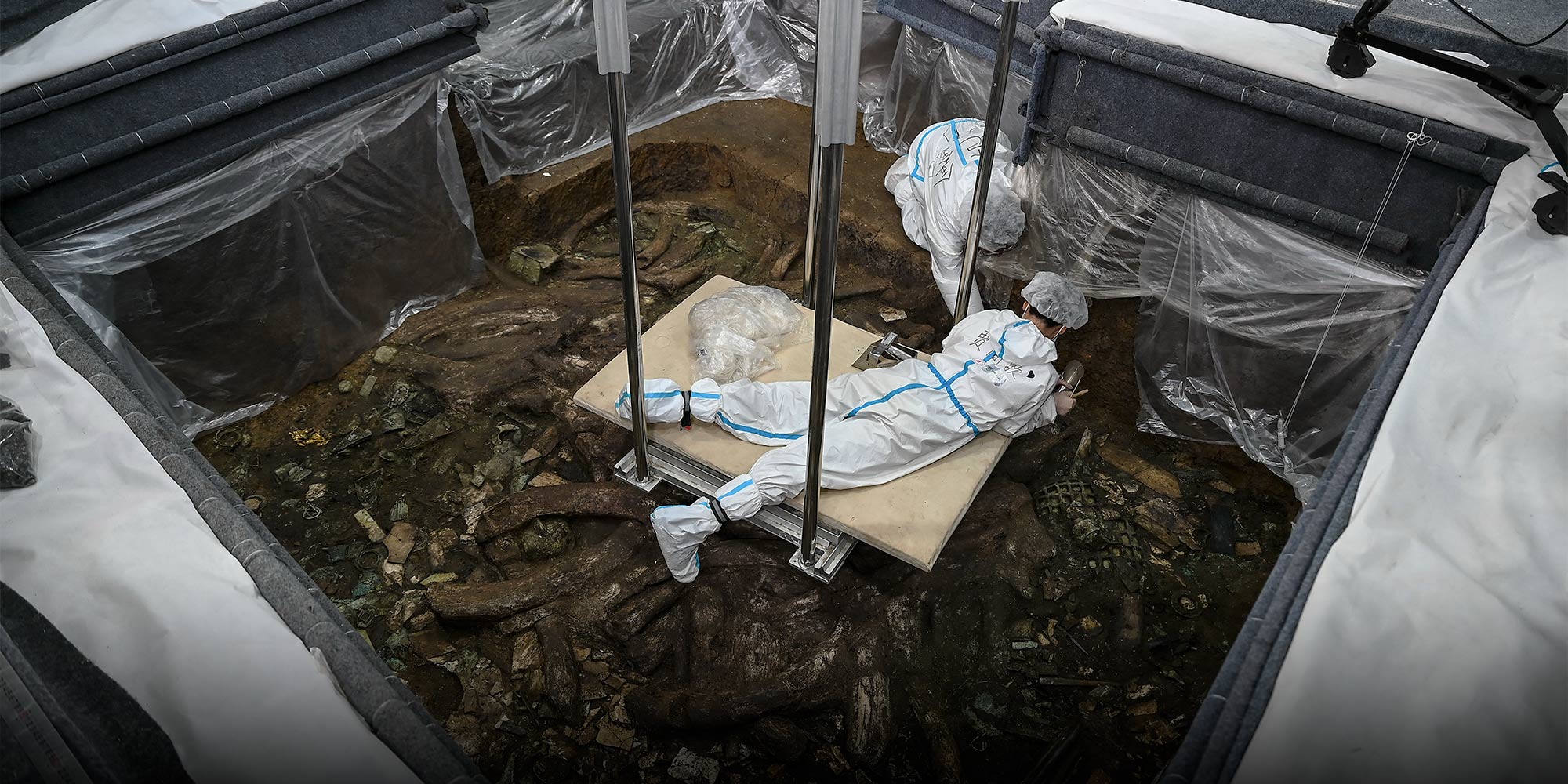 This article is the second in a series on the past, present, and future, of Chinese archaeology. Part one can be found here.

Read through domestic media coverage of Chinese archaeology, and you may be struck by the emphasis put not just on unearthed relics, but the new technologies used to find and identify them. In the media blitz to publicize this year’s Sanxingdui excavations, for instance, television cameras lingered on high-tech, climate-controlled cabins, the “Mission Impossible”-style platforms that allowed archaeologists to reach deeper without disturbing the soil, and the advanced lab equipment that promises to finally shed light on the site’s mysterious artifacts.

Technology and the natural sciences have always played a role in archaeological practice. As early as the 1920s, when Chinese archaeologists were conducting the country’s first excavations, chemist Wang Jin performed chemical analyses on Han Dynasty coins to learn more about ancient Chinese metallurgical technologies. The country built its first carbon-14 dating lab in 1965.

Over the past three decades, China has increasingly sought to expand and emphasize the application of scientific techniques and methodologies in the field of archaeology, even to the point of creating an officially recognized subdiscipline of the field: archaeological science. Today, there are more than 30 institutes and universities in China with their own archaeological science centers or laboratories, spanning multiple fields of research, including everything from radiocarbon dating and zoology to archaeobotany, human osteoarchaeology, DNA research, stable isotope analysis, and archaeometallurgy.

The best example of how this high-tech approach works in practice isn’t Sanxingdui, but Erlitou, a Bronze Age site near the ancient capital of Luoyang, in what is today the central Henan province. Since the 1950s, cultural relics made from pottery, jade, turquoise, and bronze have been unearthed at Erlitou, providing insight into the ancient city’s highly sophisticated culture. Graves, sacrificial pits, and oracle bones, meanwhile, hint at the existence of a complex religious system.

But in recent years, archaeologists have been able to delve further into Erlitou’s mysteries, thanks in large part to interdisciplinary approaches. Environmental archaeologists, for example, have shown that the Luoyang Basin had a warm and humid climate during the city’s prime. The nearby Yiluo River, together with its tributaries, formed an alluvial plain that sustained agricultural production and facilitated contact with the rest of what is now northern China.

Today, there are more than 30 institutes and universities in China with their own archaeological science centers or laboratories.
– Chen Xianglong, archaeologist

Human osteoarchaeology, meanwhile, suggests that the city’s inhabitants shared physical characteristics with others in China’s Central Plains, though early research using strontium isotopes hints that around 30% of the remains found in Erlitou belonged to migrants rather than locals.

We also know that, during the Erlitou period, a prosperous and complex agricultural production regime had already formed in the region. Millet was the staple food grain, followed by rice and broomcorn millet, wheat, and soybeans. The most widely consumed meat was pork, followed by livestock such as dogs, cattle, and sheep, as well as the occasional deer or other wild game. The simultaneous development of cereal crop cultivation and livestock husbandry contributed to Erlitou cultural growth and prosperity.

Interestingly, new studies using carbon, nitrogen, hydrogen, oxygen, and strontium isotopes indicate that a relatively high percentage of the livestock consumed at Erlitou were raised elsewhere. Some were imported from other regions to be eaten, while others were used in rituals and sacrifices. The traces of wheat, cattle, and sheep that have been discovered at the site all belong to species that are foreign to the Luoyang Basin and even East Asia. They were first cultivated by farmers in Western Asia and then brought to China through Central Asia around 3,000 B.C. About a millennium later, they were introduced to the Central Plains.

These same networks brought metallurgy to China. But the ancient people of Erlitou were also quick to combine these newly introduced species and technologies with local traditions to produce new forms. Jade cutting, too, reached new heights, as Erlitou was able to produce large jade objects for ritual purposes.

A jade tablet found at Erlitou, on display at Erlitou Site Museum of the Xia Capital in Luoyang, Henan province, May 2020. People Visual

The pottery industry also reached a certain degree of advancement during this time; dedicated workshops that exclusively produced earthenware to be used by nobles or in rituals were established. There was a relatively long supply chain for the materials used in the production of handicrafts such as bronzeware, turquoise implements, white pottery, and stone tools. These materials were sourced not only from the Luoyang Basin, but also from surrounding regions such as south of Henan, in what is today Hubei province, as well as the Zhongtiao Mountains in the neighboring Shanxi province.

Archaeological science is responsible for some of the most revealing finds from Erlitou — itself one of the most important archaeological sites in China. New methods suggest a large-scale, state-level society with a sophisticated economy, a firm system of governance, and an advanced culture.

Just as important, archaeological discoveries made with the aid of modern scientific techniques have given archaeologists and the public alike profound insights into the lives of the general populace — as opposed to the kings, generals, and ministers whose exploits dominate popular history books. In that sense, archaeological science, for all its high-tech trappings, shows us a more authentic and grounded version of history.

This article was co-authored by Yuan Jing, a professor at the Chinese Academy of Social Sciences’ Institute of Archaeology.

(Header image: Researchers excavate a pit at Sanxingdui while suspended on a board above the soil, in Chengdu, Sichuan province, Sept. 8, 2021. Wang Hongqiang/Redstar News/People Visual)