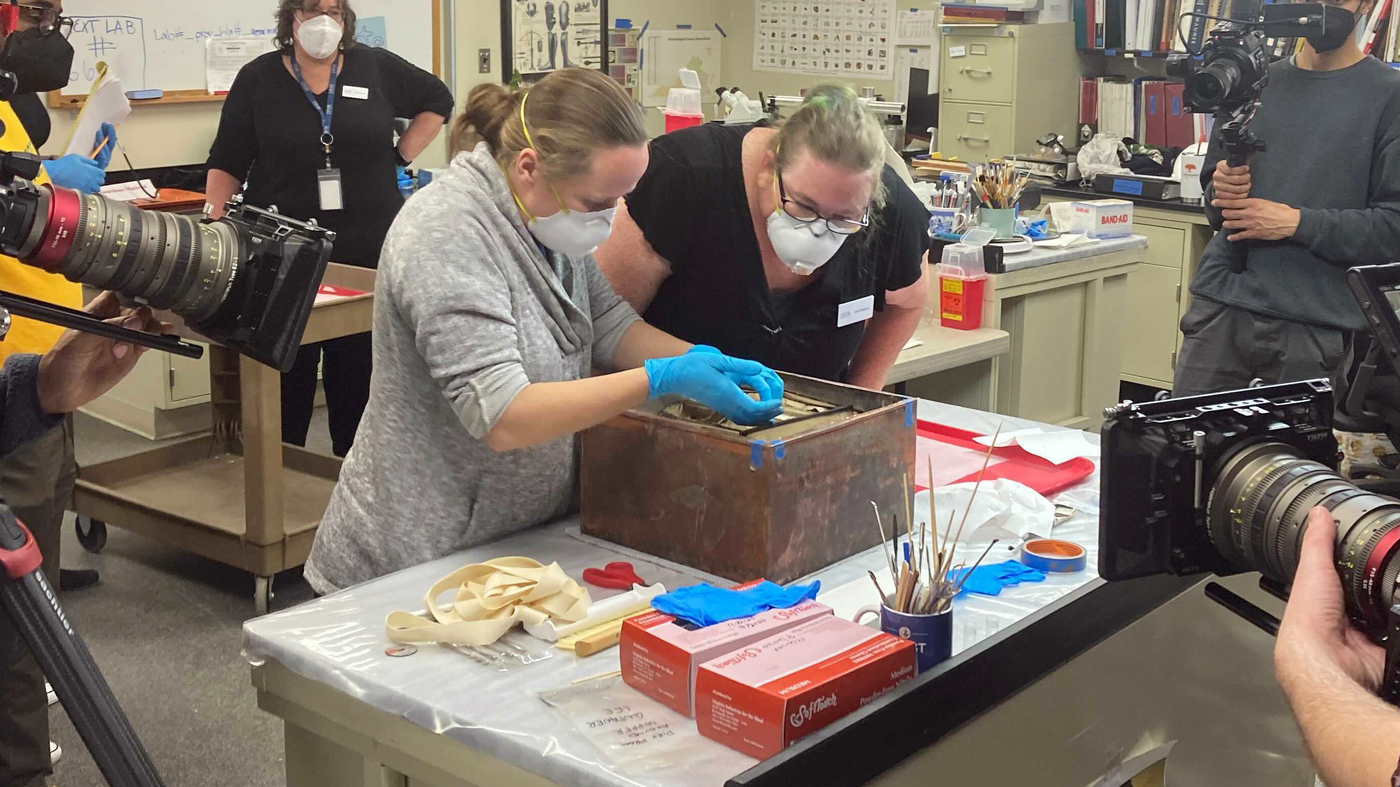 Virginia conservators unpack a box left in the pedestal at the former site of a statue of Confederate Gen. Robert E. Lee, in Richmond, Va., on Tuesday.

Virginia conservators unpack a box left in the pedestal at the former site of a statue of Confederate Gen. Robert E. Lee, in Richmond, Va., on Tuesday.

Historic conservation experts in Virginia have pulled numerous pamphlets, newspapers, coins, bullets and other memorabilia from a copper box found at the site of where a Robert E. Lee statue stood in Richmond.

The unboxing on Tuesday came after workers found the time capsule that had eluded them for months — until Monday, when Virginia’s governor announced that crews had found “the time capsule everyone was looking for.” It was placed in the statue’s pedestal in 1887.

Historians had long hoped to find it, with a newspaper account at the time detailing dozens of objects placed inside, much of it Confederate memorabilia.

“We found quite a few of them” from the list, said Sue Donovan, conservator for special collections at the University of Virginia Library.

Many of the artifacts were damp and fragile and will require delicate care to preserve them intact before they can be thoroughly examined and cataloged by historians.

Conservators delicately pulled books and coins from the box

Kate Ridgway, state archaeological conservator at the Virginia Department of Historic Resources, used implements to meticulously and carefully separate books and pamphlets in order to pull them from the box one by one.

“They were more waterlogged than we hoped, but not as bad as it could’ve been,” she told reporters.

Much of the box contained documents of various kinds. One book was called The Minutiae of Soldier Life. They found a Bible and an 1887 Almanac. Another booklet was called Army of Northern Virginia Memorial Volume 1880. Two booklets were in a small container together: Chamber of Commerce reports from 1886 and 1887.

One pamphlet appeared to be a real estate listing: The Immigrant’s Friend: 500 Virginia Farms for Sale or Exchange. Some of the artifacts related to Freemasons, including a wood masonic symbol and a booklet called the 1886 Annual Convocation of the Grand Chapter of the State of Virginia.

There were coins, some of them stuck to paper, and several denominations of paper money, as well as five or six Minié balls, which are rifle bullets that were used in the 19th century. There was also an 1884 commemorative ribbon used as a bookmark featured a drawing of Robert E. Lee.

Conservators also found pages from an April 29, 1865 issue of Harper’s Weekly that featured a printed image appearing to show a person grieving over the casket of Abraham Lincoln. There was speculation that the box may have contained a rare photograph of Lincoln in his coffin, though they did not find it upon their initial unpacking on Tuesday.

Conservators will release a detailed accounting of what they pulled out

Now conservators will focus on stabilizing the artifacts, which will include putting waterlogged books in a freezer and drying newspapers in fabric and blotting paper to draw out moisture.

It was yet to be determined who the final owner of the artifacts will be, conservators said Tuesday.

Conservators promised to soon release a detailed accounting of all of the artifacts recovered as they work to preserve them.

“We honestly aren’t sure what all we have yet,” Ridgway said.

It was the second time capsule recovered from the Lee statue site. An earlier box found last week revealed a few books, a coin and an envelope. That capsule appeared to have been placed by the people who built the statue pedestal, but it wasn’t the one that historians were hoping to find.

Ridgway also mentioned that the boxes aren’t officially “time capsules” as there was no official date set to open them. She said “cornerstone box” is a more appropriate term.

The Lee statue was removed in September and crews had worked for the last month to take down its pedestal.