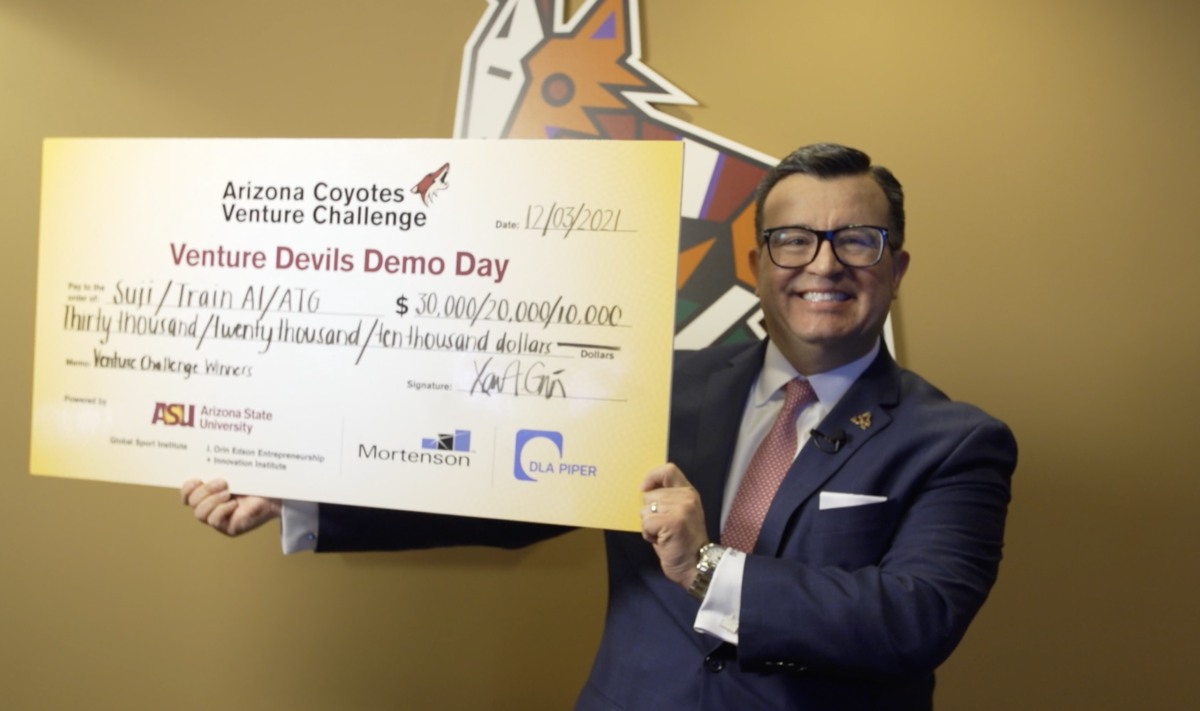 The Arizona Coyotes are looking for the next big thing.

Yes, the team is in the midst of a from-the-ground-up rebuild, but this particular search has much less to do with the team’s position in the standings, and looks instead at how technological innovations can help drive success within the organization.

The team partnered with Arizona State University, Mortenson Construction, and DLP Piper to provide $60,000 in grants and other services to various startups focused around technology-based solutions, which can ultimately benefit teams and fans alike. the winners were announced on Dec. 3, following a day of pitches to the review panel, and each entrepreneur will now take the next step in growing their business.

The challenge first came to fruition when Jeff Kunowski, Associate Director of Innovation Programs at the Global Sport Institute at Arizona State University, first met with a handful of Coyotes executives, including President and CEO Xavier Gutierrez. Once Kunowski and his team understood the team’s various needs, they got to work in seeking out the right candidates for the program.

The effort, which involved leveraging various communication platforms to get the word out, was a rousing success, and eventually uncovered 12 participant companies. Of the 12, the three that were awarded grants to help foster continual growth were:

Gutierrez said the Coyotes were pleased with the level of competition in the program, and indicated each of the winners has the potential to make an impact in their respective field.

“Each of the startups that we selected focused on one of the core pillars of our organization – impact, innovation and inclusion, Gutierrez said. “Adapt the Game recognized a need for live sporting events for Coyotes fans with disabilities and found a way to bridge the inclusion gap through technology. Train AI used technology to rally the power of community with innovation through their passion around health and wellness.  Suji’s technology will have significant impact on how athletes and post-surgery patients recover from injuries.”

The program itself was open to all startups worldwide, and entries came in from Canada, England, and Scotland, in addition to the United States. Though not all of the participants were able to attend in person during the demo, those who were found the experience both exciting and rewarding.

“It was such a thrill to pitch live on a real stage,” said Andrew Just, Co-founder of Vancouver-based Train Fitness AI, which earned $20,000 in the competition. “We plan on using a funding money to expand our library of exercises from 82 exercises to over 150 exercises, as well as do some functional updates to our application.”

Coyotes Aim to Stay Ahead of the Technological Curve

The sports world seems to continually evolve along with the ever-changing technological landscape, and the Coyotes wanted to engage with Arizona State in order to encourage more entrepreneurs to enter the fold and help provide automated solutions for problems that have existed for a long time.

Arizona does not want to be left behind, especially as other teams and leagues around the world look for any competitive edge they can muster.

“Now, more than ever, sports teams must develop and leverage cutting-edge technologies to engage fans in and out of their arenas, deliver unique and compelling content, and operate as best-in-class business enterprises,” Gutierrez said. “It’s imperative that the Coyotes and the NHL continue to evolve and find new technology-based solutions to grow our game.

“Hockey fans, and ‘fans in waiting,‘ are more tech savvy than ever before, and are seeking tech-enabled platforms to be more engaged and connected to their favorite teams. Embracing technology solutions will be key to our success today and in the future.”

Some of the ideas are simply next level. Train Fitness AI, for example, leverages common wearable technology that’s already on the market such as an apple watch, but uses it to track activities and reps that aren’t typically automatically recognized by any other application.

Though it may seem like a small detail, the convenience and time saved for those participating in more high-intensity interval training, as opposed to traditional activities like jogging, cycling, or swimming, is a game-changer in the market.

“When I went to university, I switched from cardio to anaerobic, but was dismayed to realize that none of those tools or techniques really exist on the strength or anaerobic side,” Just said. “I had tried a couple apps that manually log your workout, but the overall functionality was far too cumbersome and difficult. It was then that I realized if you could automatically track your workout, you’d help a ton of people, including myself.”

Once developed, Just, who raced triathlons as a child, needed a way to scale his idea, and his business. After hearing about the competition from a friend through LinkedIn, he wasted no time entering into the program. $20,000 later, he’s earned a litany of new fans, and now has the flexibility to develop the tech even further.

That could be an intimidating stage for any up-and-coming entrepreneur, but Just’s presentation to the group was a home run after he essentially cut his presentation short to focus on the live demo aspect of the technology.

“They really blew us away with their demo,” Kunowski said. “There’s a lot of companies out there that are trying to simplify the data tracking piece of workouts, rep tracking, using computer visions, etc, and the one thing we thought was really cool was how they’re utilizing your average smart watch and allowing for that to track your reps for you without having to log it.

The benefits of the event reached beyond the three companies what won the grants, highlighted by Organic Robotics Corporation, whose technology tracks real-time movement via ‘light lace’ sensors, which bend and twist with the human form to capture motion, muscle activity, and respiration measurements. Though the technology is designed with athletes in mind, Mortenson Construction saw an opportunity to use test it with workers on their job sites.

As such, they were awarded a beta opportunity with both Mortenson, as well as the Coyotes’ American Hockey League (AHL) affiliate Tucson Roadrunners.

Those are the types of opportunities that can help any entrepreneur reach the next level, and Kunowski knows that from first-hand experience. It turns out he earned a grant from the Edson Entrepreneurship Initiative during his time as an ASU student, vaunting his sign illumination startup, Illumin8 Outdoor Media, to the next level.

He now hopes to offer that opportunity to entrepreneurs in a similar boat that he was in not that long ago. The partnership with the Coyotes is just the cherry on top to this wildly successful program.

“It’s been fun, and it’s a little bit of giving back to help those like I was helped not too long ago,” Kunowski said. “Xavier and his vision for innovation within the organization, and externally, it’s clear he wants to have a major impact from a social impact standpoint, but he also sees the value in new innovations and bringing in new ideas and fresh ideas into the organization.”

“We were so impressed with how bright and creative all of these startups were,” he said. “It was very encouraging to see so many innovative ideas from smart and passionate people coming from unique and diverse backgrounds. The entire Venture Challenge was extremely rewarding for everyone involved, and we look forward to partnering with ASU again in the future.”

A die-hard hockey fan in the desert, and proud Iowa State alum. Detroit Red Wings and Arizona Coyotes contributor for The Hockey Writers.