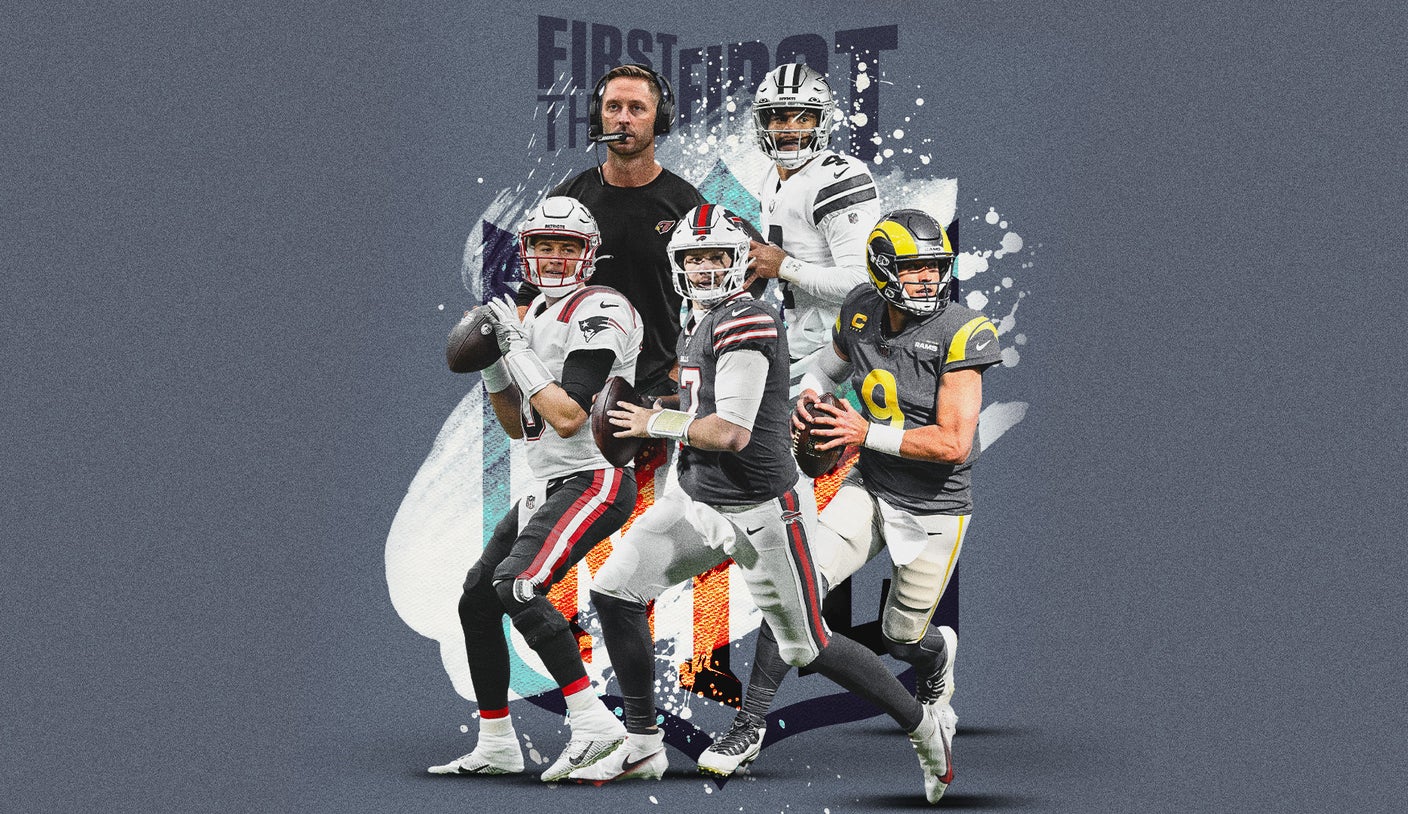 The stakes have never been higher this season for each name on Chris Broussard’s “Under Duress” countdown.

And while every player strapping up their cleats for the postseason this weekend has a valid case for inclusion, only five men can make the list.

Why these five guys are under duress in this weekend’s batch of games.

These are the five names the “First Things First” host believes are under the most pressure heading into the NFL’s Super Wild Card Weekend.

The outlook: New England showed that it could beat teams without Mac Jones making a substantial imprint on games. In fact, the team’s 14-10 win over Buffalo on Dec. 6 set records for passing scarcity. Jones attempted just three throws in the win, while the Pats’ rushing regime erupted for over 200 yards. But three weeks later, the Bills displayed an entirely different fortitude in the running game, while coaxing Jones into two INTs in his 32 pass attempts.

Broussard’s thoughts: “Usually you wouldn’t have a rookie making his first playoff start under duress, but here’s the thing: Mac started out so strong. He took the job immediately from Cam Newton, outplayed Tom Brady in just his fourth career game, and then wins seven straight games. The standard is raised, so when he struggled at the end of the season — five interceptions as they lost three of their last four — that was eye-opening for a lot of people.”

The outlook: In Nick Wright’s tiers countdown, he listed Arizona in the “Dangerous QB, Dangerous Coach” tier. Wright stressed that while Kyler Murray is a nightmare for opposing coaches, Kingsbury is dangerous to his own cause. He’s got one of the most dexterous signal-callers, plus a dogged defense at his disposal, but many are questioning whether Kingsbury can play his cards right ahead of the Cards’ biggest game of his tenure.

Broussard’s thoughts: “As a coach making his first playoff appearance in just his third year, normally you’d be like, ‘This is good.’ The problem is the way they fizzled at the end of the year, and this has become a real question mark about Kliff Kingsbury. Through his first seven games, they’re great. The rest of the year they win 32% of their games. If they lose this game, a big topic next fall will be can Kliff Kingsbury carry a team throughout the season and not fold in the end.”

The outlook: The Bills made it to the conference championship game last year, and while some might disagree, several football fans up north believe that this season holds “Super Bowl or bust” stakes. But that depends in large part on Allen’s aptitude at the QB position. It’s been an up-and-down season for the young dual-threat marksman, but the football world will soon forget about any calamity that perturbed his season should he send Bill Belichick’s Pats packing.

Broussard’s thoughts: “If they lose to a divisional opponent that starts a rookie quarterback, this will just culminate what’s been a down year for Josh Allen. Not a bad year, but not up to the standards he set last year. The stranglehold that the Patriots have had on the AFC East would still seem to be there. There will be a sense that New England still owns that division, and Mac’s only going to get better.”

The outlook: There is perhaps no QB who lives in the spotlight more than Dak Prescott. The last time that Dallas played in a conference championship game was 1996, and for Dallas, the time to make a big postseason splash is now. Prescott is the centerpiece of that effort, and he can make good on his lavish lump sum this offseason by placing the ‘Boys on his back and carrying them through the playoff gauntlet.

Broussard’s thoughts: “The reason that Dak is higher than Allen is because Allen is only 25 and in his fourth season. Dak, I’m not saying he’s old, but he’s 28. He’s in his sixth year. He’s only won one playoff game! At some point, you’ve got to get it done. I get that he was injured, but you’ve got to get it done. And beyond that, the owner already said, ‘We have a Super Bowl-or-bust mentality.’ They’ve got a tough game coming up against San Francisco. [The 49ers] have a great defense, and if they keep Dallas from running the football, then Dak is going to have to do it with his arm.”

The outlook: The storyline that’s followed Matthew Stafford throughout his career has been his inability to perform in the playoffs. While he was in Detroit, several people argued that while Stafford possessed the talent to lead a championship team, he didn’t have the necessary pieces around him to fully actualize that goal. Well, all that’s changed now. A slew of stars now accompany Stafford in his strife on both sides of the ball, and while Stafford remains the consummate big-play threat he’s long been known as (L.A. leads the league in yards per play), his INT woes have proven costly the past few weeks.

Broussard’s thoughts: “Nick, you like to rip Jared Goff. Jared Goff was a two-time Pro Bowler, who led his team to the Super Bowl. You gave up Goff, two first-round picks, and a third-round pick — you didn’t do all that to get beat in the first round of the playoffs. You got further than that with Jared Goff last year. I do think the window for Stafford to win the Super Bowl in L.A. is two to three years. He’s 0-3 in the playoffs, just four TDs, three INTs in his three games, and he’s struggled down the stretch. He has eight interceptions in his last four games. He’s got to deliver.”