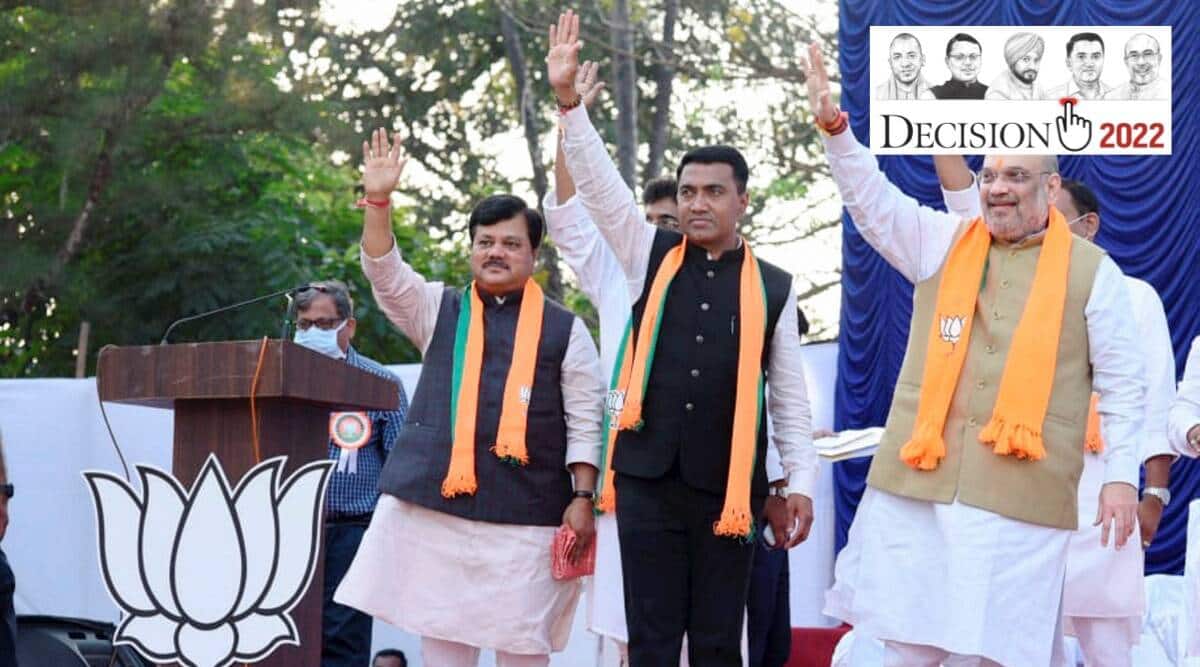 WITH EXIT polls predicting that Uttarakhand and Goa poll results would end in a dead heat, political parties in both the state capitals are preparing for post-poll scenarios. While in Goa, the Congress election candidates and party leaders convened at a hotel in Bambolim, the party was also considering the same in Uttarakhand.

The Congress high command Tuesday deputed senior leaders for poll management ahead of the results to Uttarakhand, Goa, Punjab and Manipur. While Karnataka Congress chief D K Sivakumar, who has earlier performed similar roles for the party in post-poll situations, will be the special observer in Goa, general secretary Mukul Wasnik, senior Chhattisgarh leader T S Singh Deo and Vincent Pala have been deputed to Manipur. General secretary Ajay Maken and party spokesperson Pawan Khera are to be stationed in Punjab, while Rajya Sabha MP Deepender Singh Hooda is in Dehradun.

The Congress had burnt its hands in Goa in 2017 when the BJP had stolen a march over it to form the government despite the party emerging as single-largest. From 17 MLAs, the Congress had been reduced to two in the outgoing Assembly.

As exit polls predict hung Assemblies in at least two states that went to the polls, the Congress and BJP are trying to cover all bases to be the first to claim stake. For the Congress, the memory of 2017’s reversals in Goa and Manipur are only too fresh.

In Dehradun, the Congress watched with trepidation the entry into the picture of senior BJP leader Kailash Vijayvargiya – who successfully engineered a split in the Congress ranks in 2016.

Goa Pradesh Congress Committee President Girish Chodankar said, “We have gathered for the birthday celebration of our senior leader (Digambar Kamat). All the candidates have come for the celebration. For those who want to stay (at the hotel), we have made arrangements and most of them have said that they want to stay.” He said that the party had not asked anyone to stay at the hotel, the decision was left to the election candidates. Party leaders other than election candidates also attended the gathering, while some said they were staying back at the hotel, others said they would be returning to their homes.

A day earlier AICC desk in-charge for Goa Dinesh Gundu Rao had said that the party would take a decision about moving it’s candidates to the common venue on Tuesday in the “spirit of camaraderie” and to stay prepared to ward off the BJP’s “dirty tricks”. Congress leaders said on Wednesday, that the gathering was to celebrate the birthday of senior Congress leader Digambar Kamat.

The Congress’s election candidates and other party leaders had also gathered at the hotel in Bambolim.

In 2016, the BJP national general secretary was said to have played a key role in the revolt within the Congress against its then CM Harish Rawat. As the state went under President’s Rule, an unhappy Rawat had been one of the reasons for a Congress collapse. In the 2017 elections, the party had won only 11 seats, with the BJP getting 57 of 70. In this election, Rawat is back front and centre in the Congress campaign.

Congress organisation general secretary Mathura Dutt Joshi told The Indian Express that the timing of Vijayvargiya’s visit to Uttarakhand was significant. He also said that if needed, the party would consider shifting its winning MLAs to “a secure location”.

“In 2016, Vijayvargiya stayed here for a month and left only after dislodging our government,” Joshi said.

Vijayvargiya said he had come to state for training of party workers before counting. “Sometimes those participating are new workers… The BJP takes elections very seriously and that is why we also take counting seriously,” Vijayvargiya told the media.

In Goa, Congress election in-charge P Chidambaram reiterated that the party was open to talks with other parties ahead of counting, and discussions were already on. Speaking to NDTV, he said: “Our goal is to forge a non-BJP front and such efforts are going on in other parts of India. Why not make the same effort in Goa?”

“Called on Hon’ble PM Shri @narendramodi Ji in New Delhi today. Briefed the PM about BJP’s strong performance in Goa Assembly Polls 2022 which will provide us the opportunity to form the Govt in the State once again with people’s blessings. Under his dynamic leadership and guidance, we will continue to work for people’s welfare.”

Sawant said earlier on Tuesday, “We are fully confident that that the BJP will get a full majority and form the government. If we fall short of a seat or two, there are independents who can win and support us.”

Other senior party leaders will be meeting state poll in-charge Devendra Fadnavis in Mumbai. A senior Goa BJP leader said they have designed a “fool-proof strategy” to retain power. “We will not waste any time to decide our leader and will stake claim to form the government,” a senior BJP leader said.

Trinamool Congress Goa chief Kiran Kandolkar claimed his party would win seven-eight seats and their ally MGP another four-five. Kandolkar said that unlike other parties, the TMC hadn’t asked its MLAs to head to party office after results, but hold their celebrations first.

“We don’t fear that our candidates will leave the party. We also know that no one can form the next government without the support of the TMC and MGP,” Kandolkar said.

Meanwhile, senior Maharashtrawadi Gomantak Party (MGP) leader Ramkrishna alias Sudin Dhavalikar said that his party will play an important role in government formation in Goa. The former deputy chief minister had parted ways with the BJP after he was thrown out of the government after the BJP got a full majority after 12 MLAs (including two from the MGP) defected to the party in 2019.

The MGP is a pre-poll alliance with the TMC. Dhavalikar said that the MGP has been the “king maker” in many elections since 1999. “The exit polls have opened the eyes of the central parties. I have been saying this for days. MGP has done good work this time and people have supported us. A new picture is being thrown up that MGP will win six-nine seats and I am confident we can win upto nine. If TMC wins three-to four, we can get about 13-14. The TMC and we will sit together and take the right decision. Whatever decision we take together with the TMC will be final.”

Exit polls have suggested a tough fight in Uttarakhand with none giving either the Congress or the BJP more than 40 seats in the 70-member Assembly. No party has retained power in Uttarakhand since its formation in 2000.

In Goa too, pollsters predicted that neither the BJP nor the Congress would see a comfortable win.