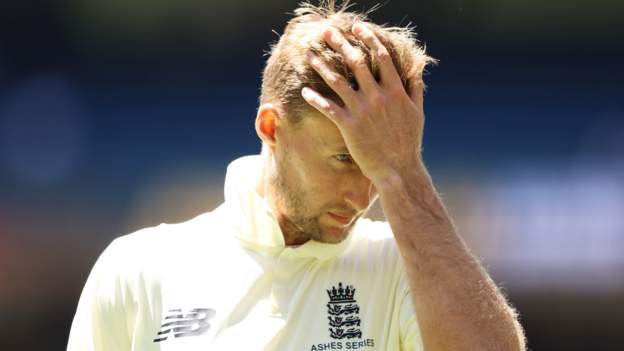 England cricket teams have become accustomed to being forcefully disintegrated by a tour of Australia.

For the fifth time in six tours, they have lost the urn at the earliest available opportunity, this time in record-breakingly swift fashion.

It took just 852.3 overs, the smallest quantity of cricket ever required for Australia to win the Ashes at home after a third Test lasting just 180 overs and four balls – also making this the earliest any team has ever lost a five-Test series.

England supporters of a statistically sensitive disposition should look away now, as I attempt to put numerical perspective on a savage series defeat at the end of a year of startling decline…

No team has ever lost more Tests in a calendar year than the nine defeats suffered by England in 2021.

In what seems like a different cricketing universe, England began the year with three wins – two in Sri Lanka followed by a stunning triumph in the first Test in India, just the second Test victory by a visiting team there since 2012.

That was also England’s sixth successive away victory, a feat not achieved by them since Sydney Barnes was in his wily pomp before World War One.

England have added one win and nine losses in their 12 Tests since, equalling Bangladesh’s nine Test defeats in 2013.

England have been bowled out for under 150 a joint-record eight times this year.

Over the previous 18 months, a new generation of batting talent seemed to have emerged.

Dom Sibley had made two centuries in his first eight Tests. Ollie Pope apparently had the breakthrough Test winter in 2019-20 that his prodigious county numbers promised. Zak Crawley built on some promising half-centuries with a majestic, multifaceted 267 against Pakistan.

In addition, Jos Buttler had had a productive home summer, Ben Stokes had averaged mid-50s over his previous 16 Tests, and Rory Burns added a century in New Zealand to his 390-run tally in the 2019 Ashes – more than Alastair Cook had managed in any of his three home series against Australia.

England had started scoring 400 again – seven times in 14 Tests up to and including their win in Chennai, having done so just once in their previous 23.

County cricket was even being congratulated for generating players who could take England forward with confidence into the challenges of an absurdly demanding year.

Since then, England have been dismissed for under 200 in 13 innings across 12 Tests (only West Indies in 2000 have been bowled out for under 200 more times in a calendar year).

England have also been bowled out for under 150 in eight innings (equalling the most in a year by a team). They have passed 400 only once, at Headingley, having skittled India for 78.

Even allowing for the quality of the three bowling attacks that have inflicted these failures – all possess balance, variety and firepower that England cannot match – and the abysmal quality of the pitches in India that precipitated this collapse in England’s batting, it has been a year of startling, concerning failure, especially given the promise with which it began.

Amid the almost nostalgically familiar post-mortems, it is also a little galling to consider that the two centurions in the Ashes so far – Marnus Labuschagne and Travis Head – as well as the top scorer in the third Test at the MCG – Marcus Harris – have benefited from stints in the much-maligned County Championship.

England batters reached 25 runs 91 times in 2021. Root converted 10 of his 18 into half-centuries, including six three-figure scores. The rest made 22 fifties from 73 scores of 25, with just one hundred – Burns against New Zealand.

The quarter-century is not one of cricket’s more celebrated milestones. In times such as these, however, let us grasp at whatever straws present themselves. Perhaps a raise of the bat to waist height would be an appropriate gesture on reaching 25, to give England supporters at least something to cheer in this honours-board-avoiding Ashes.

England’s quarter-to-half-century conversion rate of 35% is the worst by any team other than Bangladesh in their hapless early forays in Test cricket since 1999. No team that has played 10 Tests in a year has ever had a worse 25-to-50 conversion rate than England in 2021.

You are welcome to offer your own answers, but I think the correct responses are (a) yes, and (b) because, as much as England’s DAR (duck acquisition rate) and ORTPWTOTOR (Opener Returning To The Pavilion Within Two Or Three Overs Rate) have been stratospheric, they have not been far behind the prevailing trends in reaching 25, but have been awful at turning starts into significance.

To give some context, in all men’s Test cricket over the past five years – which have been a historically tricky period for Test batting – the overall conversion rate of 25s to 50s is 49%, and 25s to 100s is 13%.

Other teams collectively in 2021 have maintained numbers around the level of the prevailing trends. England have been reaching 25 – the most difficult phase of Test innings – only slightly less often than the overall average of other teams this year (30% to 33%), but getting out from 25 to 49 considerably more frequently.

Perhaps, in these fatiguing times, they need a concentration coach. Or perhaps it is simply that the much-discussed technical frailties in England’s non-Root batters are bound to emerge sooner or later in an innings.

Joe Root is the only England player who has averaged more with the bat in 2021 than 2020.

Root finished his stellar individual year with 1,708 runs, 3.22 times as many as England’s next top scorer, Burns, and an unprecedented margin of superiority by a Test batter over his next most productive team-mate in a calendar year.

It has been, by a smorgasbord of metrics, one of England’s worst batting years – possibly their worst.

And a couple of quickfire stats to take you into the new and, hopefully from an England Test perspective, better year…

England still have only two players who have posted half-centuries in this Ashes.

To update a stat from last week’s piece, it is only the fifth time in Test history, and the second in the Ashes, that a team have had fewer than three half-centurions after the first three Tests of a series – Root and Dawid Malan remaining the only two to pass 50.

Only three of England’s 15 Tests this year did not feature a duck by one of their openers.

England’s openers finished with a collective tally of 14 ducks in 2021, a record by a frankly humiliating margin.

Over the previous 10 years of Test cricket, England’s openers blobbed out 27 times in 121 matches, an average of one opener-duck per 4.5 Tests.