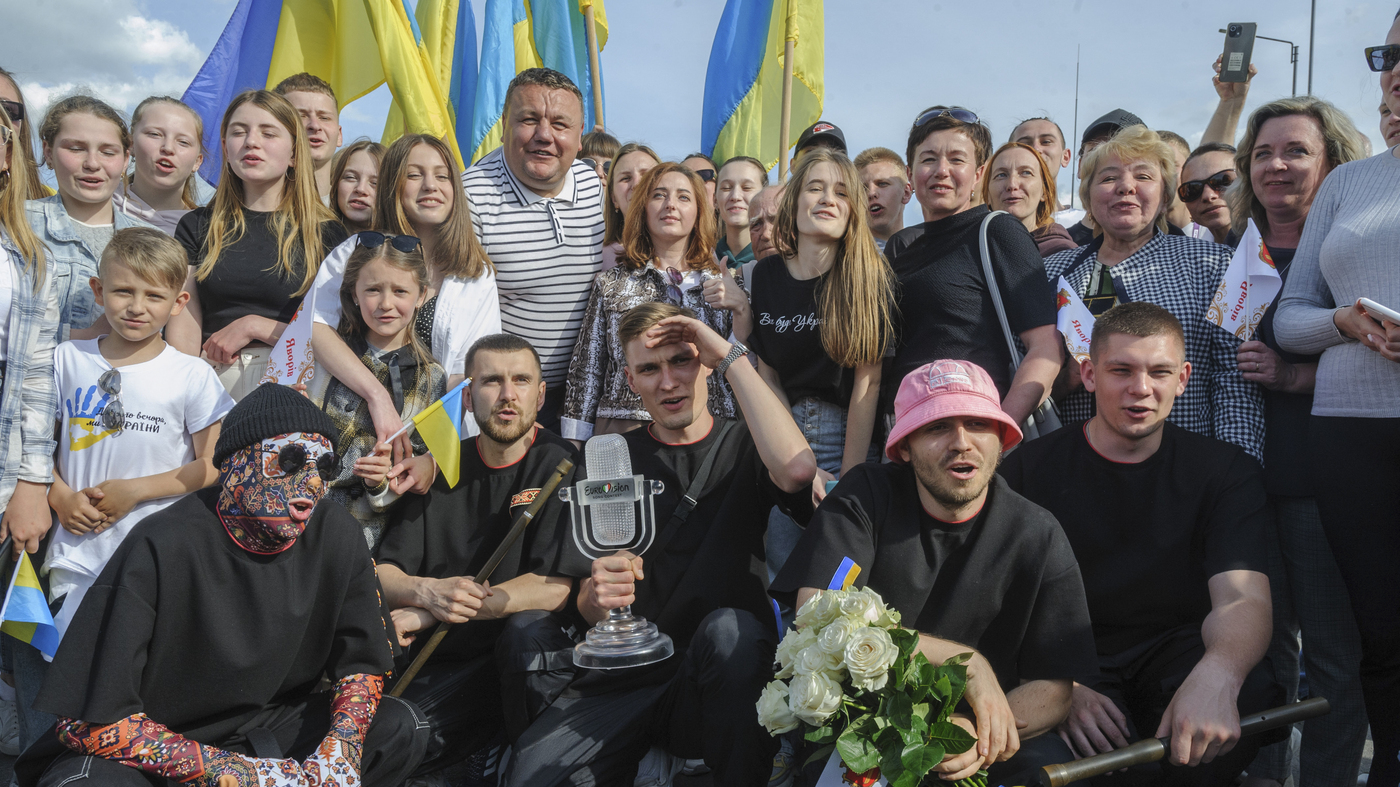 Ukraine’s Kalush Orchestra, winners of the Eurovision Song Contest, pose with their trophy in Krakovets, at the Ukraine border with Poland, on May 16. The U.K., which placed second, is in talks to host next year’s event instead of Ukraine due to the war.

Ukraine’s Kalush Orchestra, winners of the Eurovision Song Contest, pose with their trophy in Krakovets, at the Ukraine border with Poland, on May 16. The U.K., which placed second, is in talks to host next year’s event instead of Ukraine due to the war.

It’s customary for the country that wins Eurovision to host the international songwriting competition the following year. But the winning country usually isn’t defending itself in war at the same time.

That’s the case for Ukraine, whose folk-rap group Kalush Orchestra won the contest last month. Frontman Oleh Psiuk told NPR right before the final, as Russia’s war continued to devastate the country, that he was confident that a “rebuilt, whole and happy” Ukraine would be able to host Eurovision 2023 if it were to win.

Sadly, a panel of public broadcasters and security experts have reached a different conclusion. The European Broadcasting Union (EBU) — which operates Eurovision — announced on Friday that it is not a viable option for Ukraine to host next year’s contest.

It said it had worked with Ukraine’s public broadcaster, UA:PBC, and a number of third-party specialists to conduct an assessment and feasibility study given the issues posed by Russia’s invasion. The famously elaborate TV event needs 12 months of preparation and involves thousands of people, according to the EBU.

“Following objective analysis, the Reference Group, the ESC’s governing board, has with deep regret concluded that, given the current circumstances, the security and operational guarantees required for a broadcaster to host, organize and produce the Eurovision Song Contest under the ESC Rules cannot be fulfilled by UA:PBC,” it said.

That means the United Kingdom, as the runner-up, will potentially host next year’s event — which would be its first time doing so since 1998. The EBU said it’s now beginning discussions with the BBC, which a BBC spokesperson confirmed to The Guardian.

“Clearly these aren’t a set of circumstances that anyone would want,” the BBC spokesperson added. “After their decision, we will of course discuss the BBC hosting the Eurovision song contest.”

The EBU thanked the Ukrainian broadcaster for “their wholehearted cooperation and commitment in exploring all scenarios,” sharing in their disappointment that the country won’t be able to host. And it vowed to honor Ukraine as the reigning champion in other ways.

“It is our full intention that Ukraine’s win will be reflected in next year’s shows,” it added. “This will be a priority for us in our discussions with the eventual hosts.”