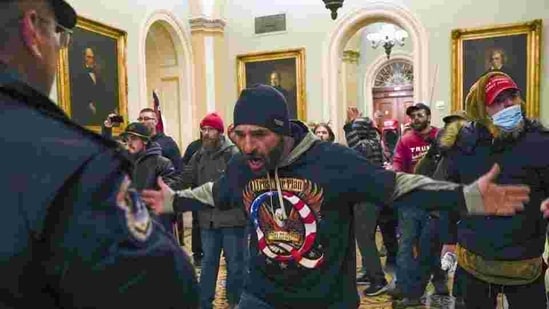 Experts have warned that the calls for violence have only intensified as incoming Biden administration prepares for inauguration on January 20.

By hindustantimes.com | Edited by Kunal Gaurav

The US department of justice on Friday charged 15 people for their involvement in the violence in the Capitol but reports suggest that the threat of another such assault has not died down. Several organisations monitoring hate and extremism on online platforms had issued warnings of possible violence on January 6 but the law enforcement agencies were caught off guard when US President Donald Trump’s supporters stormed the Capitol.

On January 4, the Anti-Defamation League (ADL), which tracks and counters hate, wrote a blog alerting about the threats of possible violence when Congressional leaders were supposed to meet and certify president-elect Joe Biden’s win. ADL said that many extremist supporters of Trump were framing rallies as a last resort to prevent Biden from being sworn in as the next president of the United States.

The organisation had cautioned that online chatter among potential attendees in the days leading up to the rally had increased. While ADL made clear that it wasn’t aware of credible threats of violence planned for January 6, “the combination of an extremist presence at the rallies and the heated nature of the rhetoric suggests that violence is a possibility.”

“In response to a user who wondered what happens if Congress ignores ‘evidence’ that President Trump won the election, a user wrote, ‘Storm the capitol’,” the blog post says, referring to a chat on thedonald.win, a pro-Trump online forum.

Also Read | Explained: How Trump could be impeached again within days

Experts have issued a similar warning that the calls for violence have only intensified as incoming Biden administration prepares for inauguration on January 20. ADL CEO Jonathan Greenblatt told CNN that the white supremacists and far-right extremists “feel emboldened in this moment”. “We fully expect that this violence could actually get worse before it gets better,” Greenblatt was quoted as saying by the US media network.

The extremists are vowing to return to Washington ahead of Biden’s inauguration even after five people, including a police officer, lost their lives in the violence that ensued on Wednesday following Trump’s rally. “Round 2 on January 20th. This time no mercy. I don’t even care about keeping Trump in power. I care about war,” an anonymous person posted on thedonald.win.