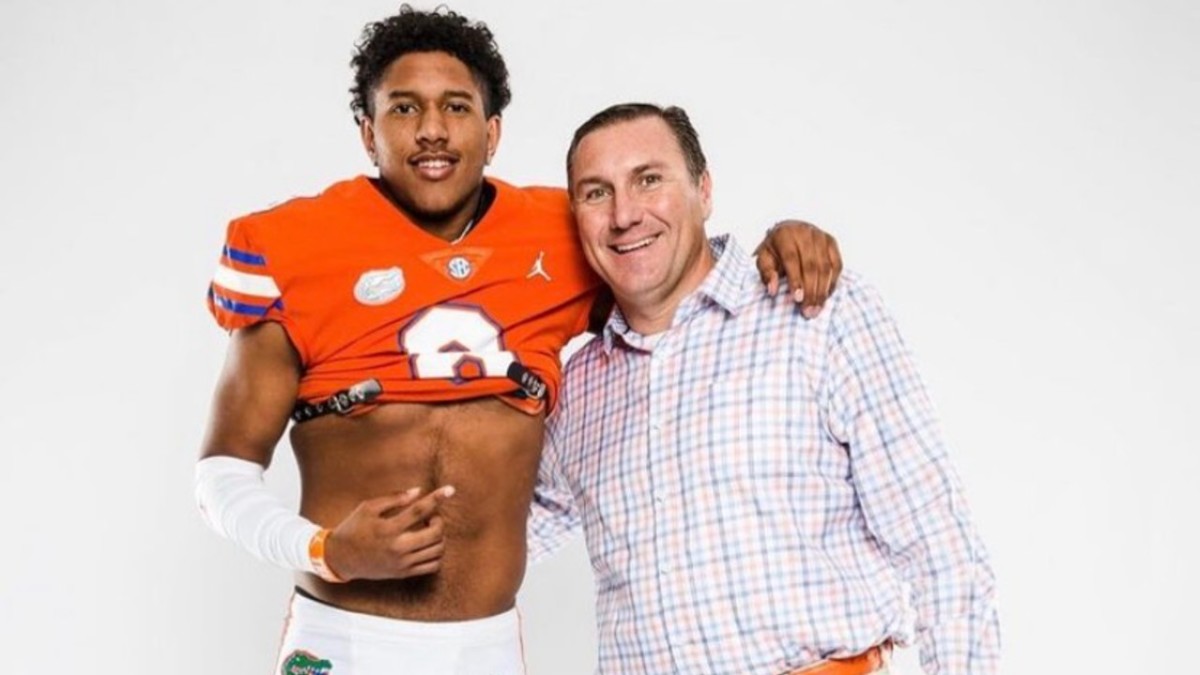 Everyone knows the story of legendary, now former Florida quarterback Kyle Trask. With the 2020 Heisman Finalist now off to the NFL Draft, it’s time to get familiar with a player who should eventually fill his role.

Florida signed two quarterbacks in the class of 2021, Carlos Del Rio-Wilson and Jalen Kitna. To begin our Five Play Prospect series, we’ll feature Del Rio-Wilson as he’s been a featured member of UF’s recruiting haul for some time.

The 6-foot-2, 215-pound signal-caller committed to Florida in July 2019 after attending UF’s Friday Night Lights camp, establishing himself early on as Dan Mullen’s guy at quarterback in the class. Del Rio followed his commitment with an impressive junior season at McEachern (Ga.), completing 64% of his 211 passes for 1792 yards, 16 touchdowns, and five interceptions. He also rushed for 572 yards and eight touchdowns on 117 attempts, averaging 4.9 yards per rush.

Del Rio-Wilson would transfer to Grayson, on the other side of Atlanta, but was ruled ineligible prior to the season kicking off. He enrolled at Cartersville a month later, a 45-minute trek north of McEachern, where Clemson’s Trevor Lawrence played his high school ball. There, Del Rio-Wilson had a 66.7 completion percentage, throwing for 1374 yards, 12 touchdowns, and four interceptions in eight games, adding 289 yards and five touchdowns on the ground.

The Five Play Prospect series, which we began on AllGators last year, breaks down five clips of each enrolled prospect’s high school film, to paint a picture of the strengths in their game and what they can continue to develop at Florida.

Del Rio-Wilson doesn’t have film available from his senior season, so we’ll take four plays from his junior season at McEachern and his performance during the pro day drills at Elite 11 this past summer.

Sports Illustrated All-American had six scouts on-hand, including myself, grading each quarterback at the Elite 11 finals this past summer. Del Rio-Wilson was SIAA’s highest-graded QB during the pro day drills, each pass graded on a 1-3 (3 being a “money throw”) scale, beating out the nation’s No. 1 prospect Caleb Williams and each of the 18 other passers.

Del Rio, a Florida commitment, set the tone from his first few throws and his accuracy and timing never slowed down through nearly 20 throws. He was accurate to all three levels and his velocity never tapered off despite being one of the night’s final acts. His confidence grew with each throw and it showed in a big way. It appears the on-hand staff docked him points for rpm/spiral consistency.

Almost every quarterback struggled to connect on the swing pass out of the backfield, but Del Rio-Wilson made the throw with ease before launching two beautiful downfield throws, which led to “oohs” and “ahhs” from the media and a whole lot of cheering from the coaches and participants.

Mobility as a passer

Del Rio-Wilson isn’t labeled as a dual-threat by recruiting services, but I’d certainly consider him a threat with his legs. Although I didn’t include a clip of him actually running the ball, I think this throw on the run is one of the most impressive on his entire HUDL tape.

The opponent sends a five-man rush with a spy on Wilson at the second level, playing Cover 1 in the secondary. Grayson executes a slant/fade rub route combo on the boundary side of the field with the slot receiver getting a step on his defender.

As that happens, Del Rio-Wilson is forced to flush from the pocket to the right as the blitzing linebacker went unblocked. He recognizes the fade route as he rolls and delivers a beautiful pass into the endzone without ever setting his feet, traveling about 40 air yards and placed where only the receiver could make a play.

Del Rio-Wilson’s ability to move within and out of the pocket translates well to Mullen’s traditional spread offense, which is predicated on a mobile quarterback. Add in Del Rio-Wilson’s arm talent and you can’t help but wait to see how he develops.

Here’s another pretty deep ball from Del Rio-Wilson. Unfazed in a clean pocket, he uncorked this pass for a casual 51 yards and hit his receiver perfectly in stride. The clip was cut short on film, so I certainly hope the receiver didn’t drop this ball…

Del Rio has shown time and time again that he can make pretty throws like the one above. Again, I want to emphasize that I haven’t seen his senior year footage, but from his junior season, I just want to see more consistent placement when he’s throwing deep.

Facing a three-man rush with max protection, you want to see Del Rio-Wilson put more into this throw. Granted, it was from the opposite hashes, but this pass went 35 air yards downfield and Del Rio-Wilson’s throwing mechanics didn’t lead to a strong follow-through. His base was a bit flat-footed in the pocket and he didn’t carry his weight through the throw.

The field safety wasn’t in a position to contest this pass, leaving the wide receiver one-on-one with the cornerback. The cornerback played the seam well, so it was smart for Del Rio-Wilson to get this ball outside. However, if he could have pinned the ball to drop near the five-yard line and a bit more in stride, it would have been six points.

I put this one in slow-motion as a testament to Del Rio-Wilson’s confidence, which he showed plenty of at Elite 11 surrounded by the nation’s best quarterbacks.

Watch the flip Del Rio-Wilson does with the ball as soon as he catches the snap and looks the safety off to the opposite side of the field, before quickly unleashing a beautiful touchdown throw on a fade route to the front corner of the endzone. Del Rio-Wilson knew the second he stepped behind center that this play had touchdown written all over it, and he delivered a perfect pass with poise while trusting his receiver to make the grab. You love to see that type of confidence from a young signal-caller.

Along with more consistency as a deep passer, I’m curious to see how Del Rio-Wilson develops with passing into the short/intermediate middle of the field. I’m not suggesting he can’t do it, but there weren’t many examples of route patterns taking time to develop within the hashes.

But from what Del Rio-Wilson put on film during his junior season, paired with numerous strong camp performances, he has all the tools that a Mullen style of quarterback strives for.

Emory Jones is projected to start as a redshirt junior entering the 2021 season, Mullen’s first QB recruit at Florida. Anthony Richardson, who earned snaps as a true freshman, is easy to peg as the backup and has a bright outlook as a future starter for Florida. But as Mullen indicated in his signing day press conference, Del Rio-Wilson or Kitna could contend for QB2 as they have both enrolled early.

“Going into next year, at this point we’re only going to have two quarterbacks on scholarship when we show back up in January,” said Mullen. “You’re a trip getting on the bus and spraining my ankle away from having one quarterback here. So these guys are pretty close to competing for the backup job Day 1 that they get on campus.”

Considering Del Rio-Wilson’s fit in Mullen’s offense and the fact that Jones and Richardson, similar types of QBs, earned snaps as true freshmen, I’m comfortable projecting that Del Rio-Wilson will earn some early playing time as well. That might give him the nod over Kitna on the depth chart, but spring and fall camp will provide more insight.