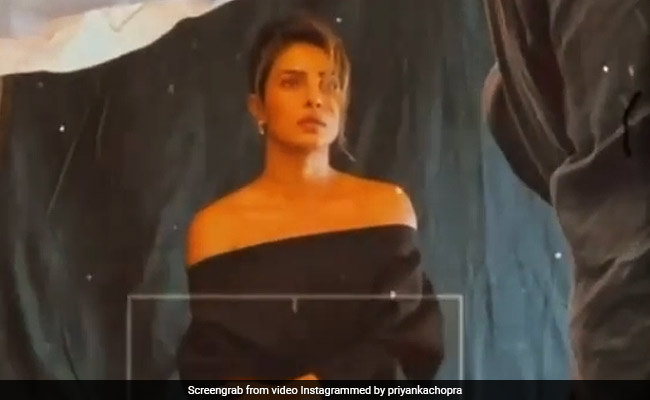 Priyanka Chopra in a still from her BTS video (courtesy priyankachopra)

Priyanka Chopra just shared a behind-the-scenes video from the cover shoot of her memoir Unfinished and guess who makes an appearance in it? It’s none other than Priyanka’s pet Pooch Diana. Priyanka shared the BTs video with a catchy caption, playing around with the name of her memoir, and wrote: “Every shoot is unfinished unless Diana makes an appearance.” Priyanka’s video explains her caption better – mid-way through her shoot, the actress can be seen posing with her fur-baby in her arms. Priyanka Chopra and Nick Jonas are also dog parents to two more fluff-balls – a German Shepherd named Gino and a Husky-Australian Shepherd mix Panda.

Diana, who has an Instagram profile of her own, also dedicated this adorable message to mom Priyanka Chopra on her profile: “I’m so glad to have been a part of my mommy’s journey and boy she’s had a great one… I love you mommy, can I get a signed copy of your book too?”

Last week, Priyanka Chopra unveiled the cover of her much awaited memoir Unfinished. In almost no time, it became a best-seller in the US based on pre-order. Explaining the title of her book, Priyanka wrote in a post: “Ironically, I named this memoir years before I started writing it. Having been a public person now for 20 years, with so much life to live and a long list of things to check off my list personally and professionally, I am very much Unfinished.”

In terms of movies, Priyanka will next be seen in Netflix film The White Tiger. She also has Netflix’s superhero film We Can Be Heroes and a film with actress-comedian Mindy Kaling in the line-up.