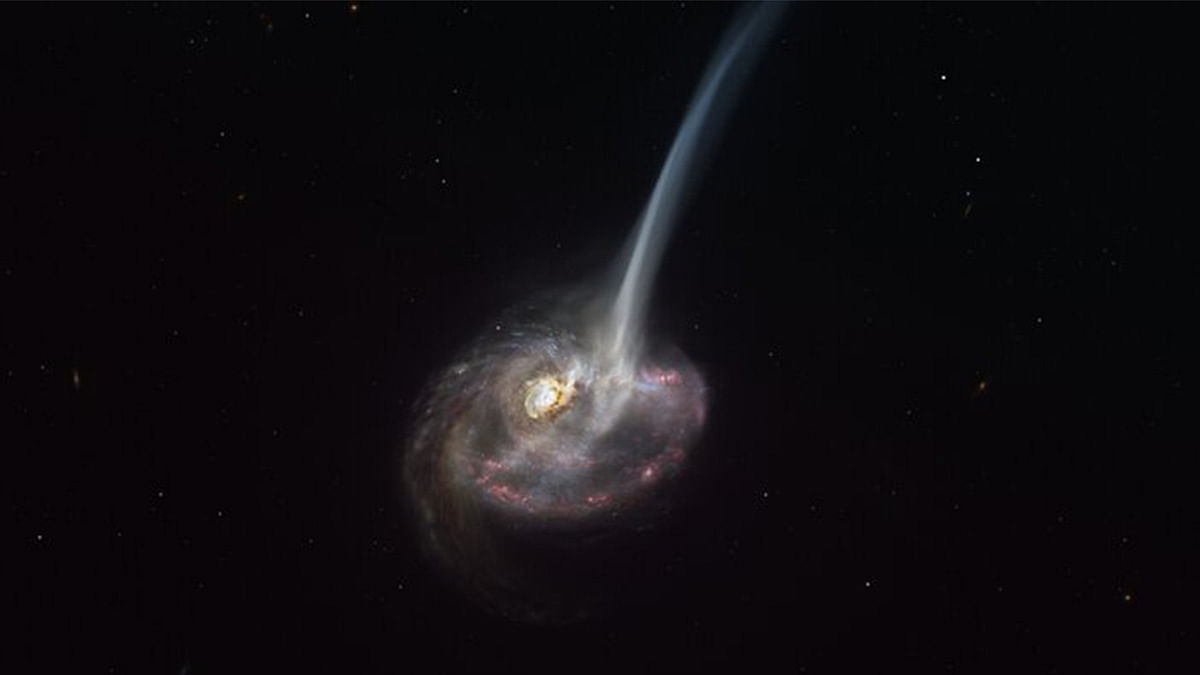 
Bengaluru: Astronomers have observed many ‘dead’ galaxies but the process of the death itself hasn’t been observed before — until now.

Using the telescope Atacama Large Millimeter/submillimeter Array (ALMA), astronomers observed a galaxy, nine billion light years away from the Earth, ejecting nearly half of its star-forming gas and losing fuel.

Galaxies begin to ‘die’ when star formation stops inside them or they start losing material that forms stars.

The galaxy is still forming new stars very rapidly, but since it is also quickly running out of fuel, the remaining gas will be consumed and the galaxy is likely to be dead within a few million years.

“This is the first time we have observed a typical massive star-forming galaxy in the distant Universe about to ‘die’ because of a massive cold gas ejection,” said Annagrazia Puglisi, lead researcher of the new study from UK’s Durham University and the Saclay Nuclear Research Centre (CEA-Saclay), France, in a statement.

The findings were published in the journal Nature Astronomy Monday.

Also read: Mars, Moon & a fresh pair of eyes in the sky — the big space missions planned for 2021

The research team behind the findings believes that the ID2299 galaxy is ejecting monumental amounts of cold gas because of a collision between two galaxies, which eventually merged to form ID2299.

Colliding galaxies are identifiable by their ‘tidal tail’ — elongated streams of gas and stars traced out in interstellar space behind the galaxies.

These tails are harder to spot in distant galaxies but since the researchers caught the bright feature just as it was launching into space, they were able to identify that the gas ejection was a part of the trail.

It was previously believed that black hole activity as well as winds caused by star formation ejected the gases out of galaxies.

“Our study suggests that gas ejections can be produced by mergers and that winds and tidal tails can appear very similar,” said study co-author Emanuele Daddi of CEA-Saclay in the statement.

Daddi believes that retrospective analysis of gas ejections captured could confirm if some of them are in fact tidal tails.

“This might lead us to revise our understanding of how galaxies ‘die’,” he added.

The discovery was a serendipitous accident and occurred when the team was inspecting data from a galaxy survey conducted by ALMA to study the properties of cold gas in far away galaxies.

Also read: There’s a 2nd kind of fusion happening in the Sun, scientists confirm through neutrinos

Why news media is in crisis & How you can fix it

But the news media is in a crisis of its own. There have been brutal layoffs and pay-cuts. The best of journalism is shrinking, yielding to crude prime-time spectacle.

ThePrint has the finest young reporters, columnists and editors working for it. Sustaining journalism of this quality needs smart and thinking people like you to pay for it. Whether you live in India or overseas, you can do it here.