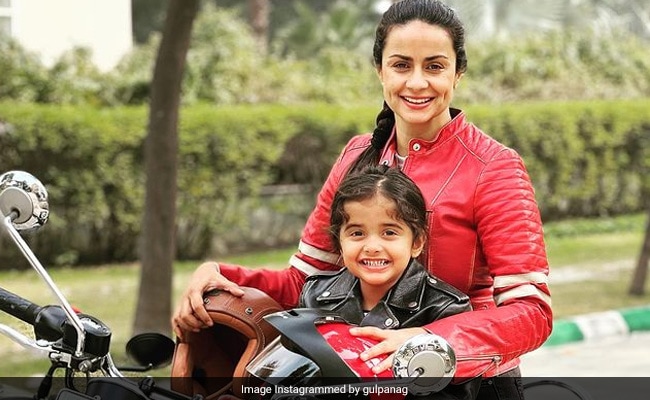 What’s one way to kickstart the new year? Well, a thrilling bike ride could help. At least, that’s what Gul Panag is doing. When stepping into a year, we can definitely expect her to make the most of it. Gul Panag is also a biker. And, she recently set out on her bike for an electrifying experience. Of course, Gul Panag brought her son Nihal and husband Rishi Attari along with her. The actress has shared a photo where she is seated on a bike with Nihal. Gul Panag is wearing a red biker’s jacket and Nihal is dressed in black. Gul Panag captioned the photo, “Each time I start the bike, Nihal is thrilled and says -“ Well done, Mama.” And, it’s an electric start.” But she had only one thing to complain about. Gul Panag added, “His confidence in me though is limited as he prefers riding with his father.”

Gul Panag has added two more photos. In one, we see the family of three in one frame. She takes the selfie while Nihal sits with her husband on another bike. The three are all smiles for the camera. Gul Panag captioned it, “Like I said, Nihal prefers riding with his father.”

Gul Panag also posted a throwback photo from the days when Nihal was younger. In the photo, she is wearing a black vest with grey jeans. Nihal is a small baby in a red shirt and blue trousers. Gul Panag wrote, “Throwback to when Nihal was little and couldn’t actually go on a ride – only pose.” The actress used hashtags in her three posts. She wrote, “insta bike,” “biker”, “biker mom”, “mom life” and “biker chic.”

Gul Panag’s family vacation in the Maldives saw her diving into another set of adventures. She was accompanied by her son Nihal, husband Rishi Attari and her parents on the trip. From snorkelling to cycling, the family enjoyed their time through these various activities. Lazy pool times followed by a scrumptious lunch were part of the family’s holiday time. Gul Panag’s Instagram photos from the vacation clearly showed how much fun she must have had.

When it comes to enjoying her time with her family, Gul Pang is quite a sport.