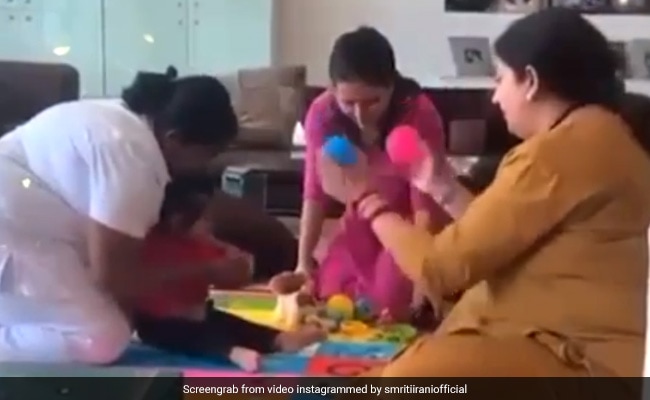 Ekta Kapoor’s son Ravie turned three recently. Politician and former actress Smriti Irani, who is also Ekta Kapoor’s close friend, wished Ravie by sharing the sweetest video and note. The video has glimpses of Ravie’s sweet moments and also features Smriti Irani playing with him. Sharing the video, Smriti Irani wrote, “It’s my baby’s birthday.. Ravie… you are such a blessing to your Mom & the entire family .. loving , vivacious and kind .. May God always bless you with good health & happiness… your Maasi misses you so so much happy birthday love.” Ekta Kapoor replied to Smriti’s video and wrote, “This is soooo adorable ! Maaaasi ravie loves uuuuuuu.”

Ekta also reposted the video and captioned it as “Thank you so much for the wishes @smritiiraniofficial masi… we are so thankful to have you in our lives !!! You are the best masi ever!!!”

Smriti Irani and Ekta Kapoor are close friends. Smriti Irani had acted in Ekta Kapoor’s popular show Kyunki Saas Bhi Kabhi Bahu Thi and the two became best of friends. They are often seen praising each other and spending time.

Ekta Kapoor welcomed Ravie through surrogacy in 2019. She had shared the happy news on social media. Last night, to wish Ravie, Ekta shared a video featuring moments shared with her son.

Uncle Tusshar Kapoor wished Ravie and shared adorable photos of him with his mother Ekta Kapoor. He captioned the photos as “Happy birthday #Ravioli ….the apple of our eye! Stay blessed Ravie….keep soaring!”

In 2019, Ekta Kapoor had announced the arrival of Ravie and had expressed her feeling in an open statement. She had written, “It is an emotional moment for me and my family, and I can’t wait to begin this new journey of being a mother.”