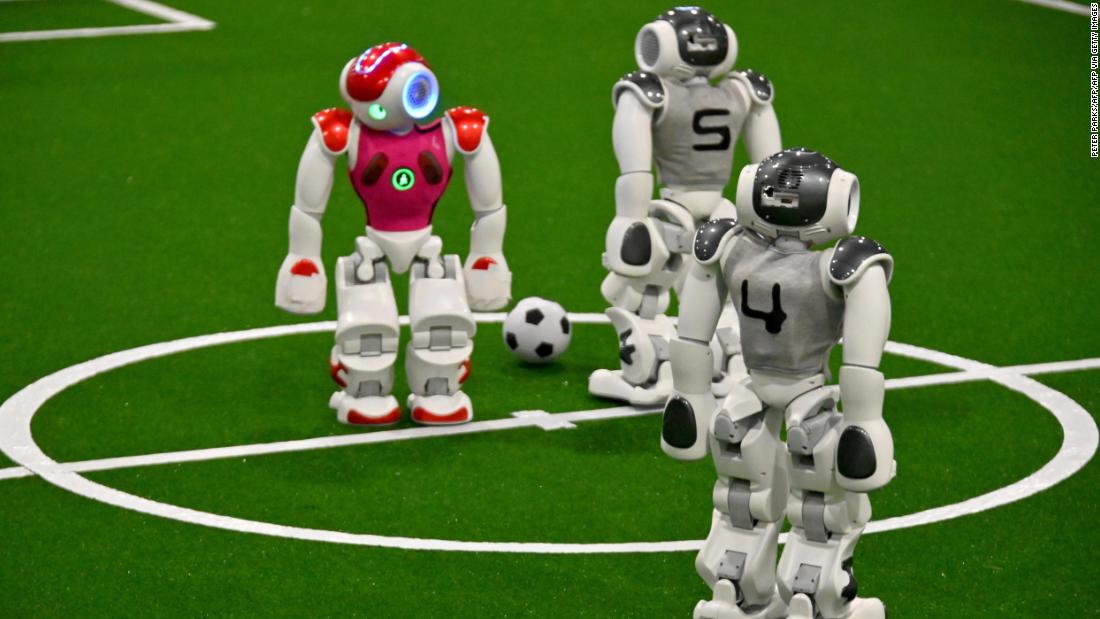 Thanks to artificial intelligence, robotics and other technological innovations, new high-tech sports are kicking off around the world. From robots taking the field to play soccer, to pilot-controlled drones racing one another, like humans, machines are proving to have their own competitive streak.

AI can now even create new sports, from the strategy and rules of the game to the layout of the playing field.

These high-tech sports may sound like they come from the future, but they already exist. Here are some of the most ground-breaking.

In drone soccer, teams of between three and five pilots score points by flying their “striker” drone through their opponent’s goal, while the opposition drones try to block them. It features three three-minute sets of intense gameplay in which players must weigh how aggressively they fly with the risk of damage to the drone.

The sport originates in South Korea and the first US drone soccer tournament took place in July last year at the Rocky Mountain State Games, in Colorado. Leagues are launching in Colorado, New York, Ohio, and elsewhere, and US Drone Soccer is introducing the sport in high schools, where it will be combined with an educational program in which students learn to build, program and repair drones.
US Drone Soccer will also be supporting the African Drone Soccer Challenge for teams of young players, led by girls — which will take place on January 29 in Lagos, Nigeria.

The Robot World Cup Initiative — “RoboCup” for short — is a soccer competition for autonomous robots. It has several leagues, in which robots of different sizes must make independent decisions while communicating effectively with their teammates.

The competition doubles as an international scientific project. In the RoboCup Humanoid League, for example, researchers investigate robotics challenges such as dynamic walking and running, kicking the ball while maintaining balance, visual perception of the ball, and teamwork.
Robots have come a long way since the first RoboCup in 1997, where 40 teams participated and 5,000 spectators attended, but robots had difficulty finding the ball and moving, according to the organization’s website. RoboCup 2021 featured more than 300 teams, and now, robots can “reliably find a ball, move very quickly, and start showing teamwork behaviors.”

RoboCup’s ultimate goal is that by 2050, “a team of fully autonomous humanoid robot soccer players shall win a soccer game, complying with the official rules of FIFA, against the winner of the most recent World Cup.”

In first-person view drone racing, pilots direct drones through complex racecourses while wearing goggles that stream live video from the drone’s camera, so the pilots feel like they are flying inside them.

Elite pilots participate in the global professional Drone Racing League (DRL), which has been televised by major networks, with its custom-built racing drones traveling at 90 miles (145 kilometers) per hour.

Drone racing is believed to have started in Australia around 2010, when pilots would attach cameras to their drones and race them through parks and backyards, according to DRL CEO and founder Nicholas Horbaczewski. DRL has since helped bring the sport into the mainstream. Six years after the official launch of the league in 2016, the sport now has 75 million active global fans, says Horbaczewski.

Speedgate doesn’t require advanced technology play, but it’s a game created by artificial intelligence. The sport combines aspects of croquet, rugby and soccer, with a playing field that consists of three gated circles laid out in a line. In three seven-minute periods, two teams of six pass a ball around, either throwing it below the waist or kicking it, with the aim of kicking the ball through the end gate to score.

“Deep learning algorithms” were used to create ideas for every aspect of the game, from the gameplay and rules to the logo, according to AKQA, the design agency behind Speedgate. The team trained a neural network using rules from roughly 400 sports. More than 1,000 results were produced — some were “downright dangerous,” according to AKQA, such as an exploding disc relay in which disc-type objects that explode on impact are thrown at the players. Others were just “hilariously implausible,” such as “hot air balloon tightrope racket” in which a team is suspended on a tightrope between two hot air balloons, hitting an object with rackets.

Speedgate has been officially recognized by the Oregon Sports Authority and is now growing into a US-wide university league, says AKQA.

Segway polo is a team sport in which players on two-wheeled, self-balancing electric vehicles try to score by hitting a ball past the goal line with their mallet.

Originating in the USA , the sport is now played in Germany, Sweden, the UK, Barbados, Spain, Lebanon, and other countries. The Segway Polo World Championship — named the “Woz Challenge Cup” after Apple co-founder and Segway polo player Steve Wozniak — was established in 2006. The Segway Polo Club of Barbados (SPCB) is the most successful team in the history of the sport, having won the World Championship five times — the last being in 2019.