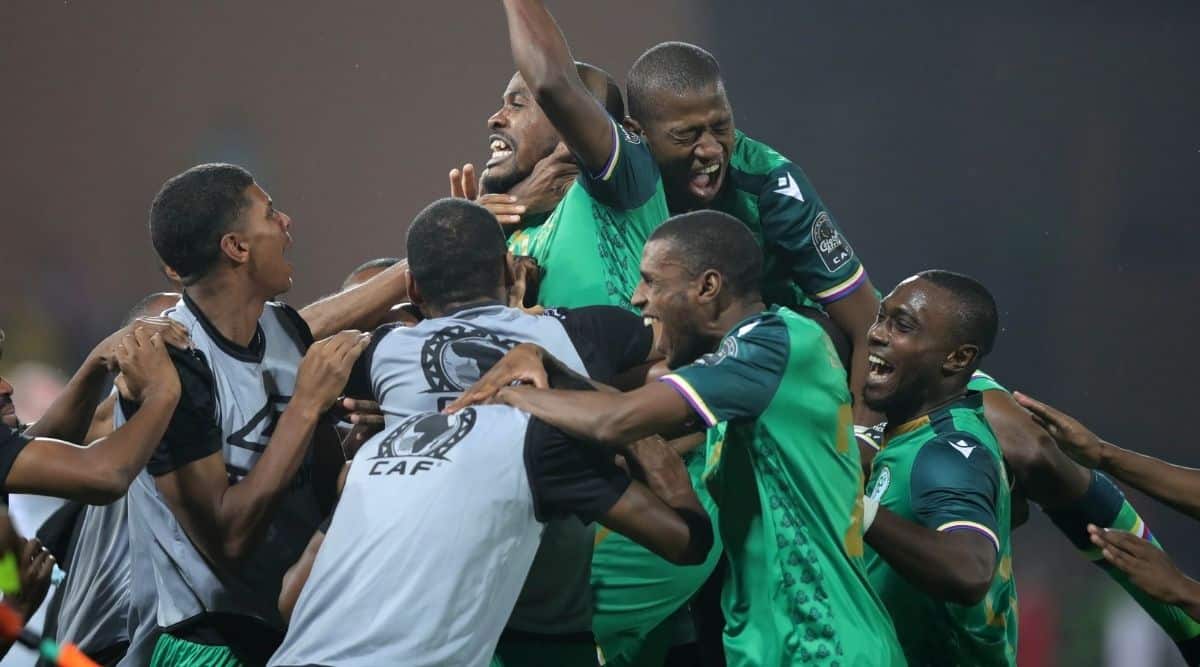 Four-time champions Ghana were eliminated from the Africa Cup of Nations on Tuesday in a stunning upset, while Morocco and Senegal won their respective groups but without backing up their status as pre-tournament favourites.

Just two days after Equatorial Guinea shook up the tournament by beating defending champions Algeria, equally tiny Comoros humiliated Ghana with a 3-2 win in their Group C clash in Garoua in one of the competition’s biggest surprises so far.

The small Indian Ocean island archipelago are making their Cup of Nations debut and registered not only their first goal of the tournament but their first win in a stunning result.

They might even sneak into last 16 as one of the best four third-placed finishers after condemning Ghana to last place but will have to wait for the outcome of the last group games on Wednesday and Thursday.
El Fardou Ben Mohamed scored Comoros’ first ever goal at the continental finals before Ahmed Mogni added a second just past the hour-mark.

Ghana had captain Dede Ayew sent off early in the match, but goals from Richmond Boakye and Alexander Djiku levelled the tie as they fought back, only for Comoros’ Mogni to grab a winner with five minutes remaining.

Morocco won the group after twice coming from behind to draw 2-2 against an under strength Gabon, who had eight payers out with COVID-19 infections and captain Pierre-Emerick Aubameyang sent back to his club in England for further medical tests after the detection of post-virus cardiac lesions.

Gabon will be hoping he is cleared to return for Sunday’s opening match of the round of 16 where they will take on Burkina Faso in Limbe.

📹 𝐇𝐈𝐆𝐇𝐋𝐈𝐆𝐇𝐓𝐒: 🇲🇼 0-0 🇸🇳#TeamMalawi and #TeamSenegal earn a point each as they play out a goalless draw in the final Matchday of group B ⚖️

Senegal finished top of Group B earlier on Tuesday, ahead of Guinea, but it was after yet another unconvincing performance despite the return from COVID-19 quarantine of captain Kalidou Koulibaly and goalkeeper Edouard Mendy.

They were fortunate not to concede a penalty in a 0-0 draw with unfancied Malawi on Tuesday and have still only scored one goal – a stoppage time penalty by Sadio Mane – after three games.

Malawi were left fuming when Cameroon referee Blaise Ngwa cancelled a late penalty he initially awarded them in Bafoussam, after Gomezgani Chirwa was brought down in the box by defender Bouna Sarr.

The decision was overturned on review, but Senegal can regard themselves as fortunate as there was both a pull of the shirt and contact.

Malawi’s president Lazarus Chakwera had offered each of those who played against Senegal a payment of 1 million Kwacha ($1,223) if the team advanced to the second round, which they look almost certain to do despite finishing third in the group.

Guinea came second – on a head-to-head count back against Malawi – despite losing 2-1 to Zimbabwe, who had already been eliminated.

Naby Keita pulled one back for Guinea after Zimbabwe had led 2-0 at half-time In Yaounde but was booked late in the game and will be suspended from their second round clash next week.

On Wednesday, Group D is concluded with Nigeria already having taken top place. They play Guinea Bissau in Garoua while Egypt will be looking for a much improved performance against Sudan to take second place.