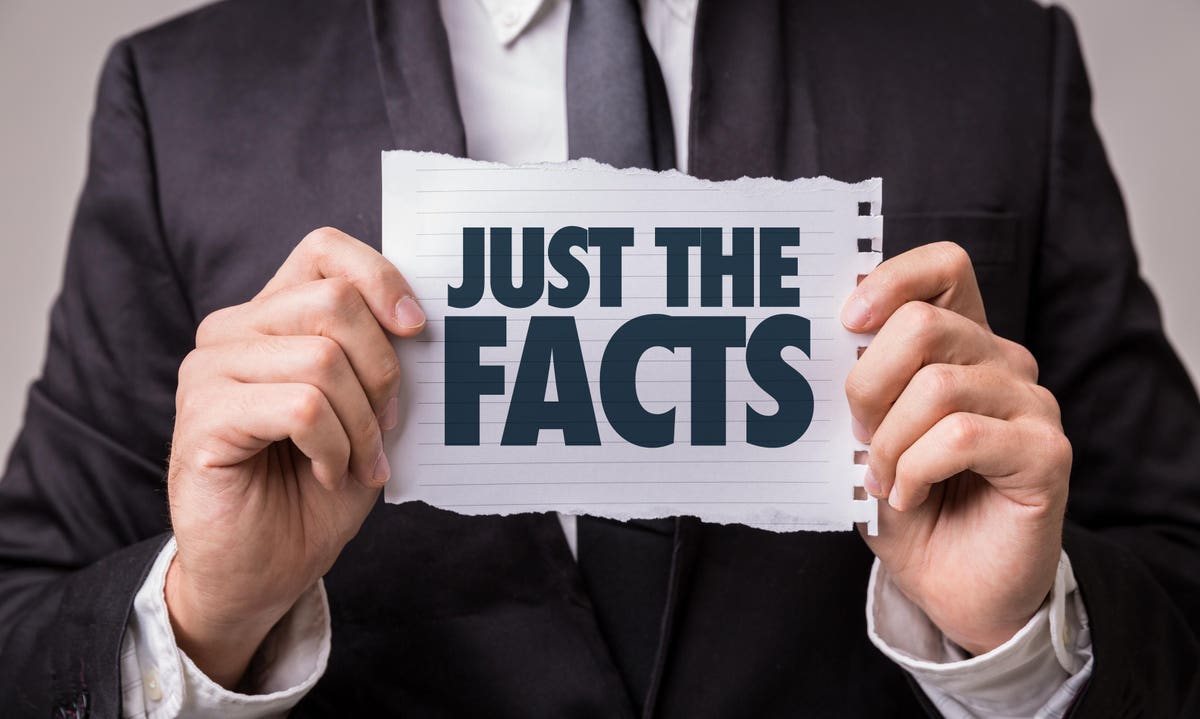 No one remembers Joe Friday from the ancient TV series Dragnet, not even me. But when I heard the phrase “just the facts, ma’am” recently, I looked it up. Turns out that this 1950’s fictional detective always got right to the point. For those who care – and I suspect there aren’t many of us – Dragnet “started out as a radio drama in 1949, made the transition to television in 1951 (and aired in both media simultaneously through 1957), became a feature film in 1954, spawned a revival TV series and made-for-TV movie in 1966, was spoofed in a 1987 movie starring Dan Akroyd and Tom Hanks, and was spun off yet again (after Webb’s death) as a new syndicated series in 1989.” (This Joe Friday guy – AKA Jack Webb – had quite a run.)

So Dragnet’s a thing. Joe Friday is attributed to have said – apparently frequently to female witnesses – “just the facts, m’am.” Aside from the obvious implied sexism, which haunts 20th century media, Joe Friday never actually said “just the facts, ma’am,” though he said things similar enough to segue to the issue at hand: facts. In this case, facts – data – about technology and its financial relationship to the company it serves.

I won’t name names. But I will tell you that a large number of CIOs, CTOs and now CDOs I’ve worked with over the years – including myself – for some reason couldn’t answer the most basic financial questions about their technology spending and the impact it’s having on their operations or strategy. They couldn’t even launch a dashboard to tell them in realtime where the money goes. It’s not just CIOs/CTOs/CDOs either. Other C-Suiters cannot answer the questions. In fact, hardly any of them can.

Is there something especially hard about the questions? Not at all. So why are the answers so mysterious? (We’ll come back to that question later.)

So what are the questions? Here are seven. There are more, but these cover the basics.

How Much Money Is Spent on Digital Technology Every Year?

It’s important to know the total amount and the relative allocations across the categories – hardware, software, communications, support, consultants, etc. – but also across categories of special importance to your company and your industry, like privacy and security in the financial services industry and supply chain planning and management in the manufacturing and distribution industries. These days, it’s also important to understand – in some detail – exactly how much and where money is spent on cybersecurity, regardless of the industry.

What % of Revenue Is Spent on Technology?

The numbers here are important to determine if you’re an operational spender obsessed with managing costs, or if you’re a strategic spender seeking competitive advantage from your investments in digital technology. Companies that spend their gross revenue on total technology investments per year in their industry tend to be operationally focused, that is, on managing technology as a cost center. If the people in your organization wax poetic about how they look to technology for strategic advantage, but spend less than the industry %, they’re delusional. Companies that spend more than their industry brethren are generally strategic investors. The key metric here is how spending-by-industry varies. Variations within industries are insightful. Some industries spend less than 8% of revenue on technology, while others – software and cloud industries – spend much more. The important metric is where a company lies across industry averages: software companies (25% of revenue), cloud companies (16%), financial services companies (10%), services companies (7%), retail/ecommerce companies (6%), consumer products companies (6%), transportation & logistics companies (5%), healthcare companies (5%) and industrial products companies (4%). Where is your company along these industry averages?

How Much Is Spent Per Employee?

The numbers here actually range from $3K all the way up to $50K per employee. Obviously the high end is usually crazy – unless there are very special circumstances, like a spate of security breaches. The key is spending segmentation. Does the money go for hardware, communications, cybersecurity or consulting, among other areas? Spending trends here are important. The metric is similar to the price per square foot in real estate, a metric most of us are familiar with.

Is there any freedom in your budget? If the boss came in and asked for $500K for a strategic project would you be able to find the money? Or $100K for a tactical one? Is most of the annual technology budget already accounted for, or is there some room for special projects, pilots, etc.? So-called entrepreneurial programs are often under-funded in small discretionary budgets. Financial agility is an asset, especially given the volatility of digital technology.

What’s the Return on the Technology Investment (ROI)?

It’s important to know the total cost of applications, communications, cloud, etc. in order to understand where the money goes and how impactful it is. Here are the top three spending priorities across industries: digital transformation (54%), cybersecurity (49%) and cloud-first/cloud migration (40%).

This is modeling heaven for lots of friends and foes in your orbit. ROI calculations are necessary evils of all budgeting processes. If you don’t measure ROI – with explicit operational and business metrics – then it will be impossible to quantify the impact of your technology spending. If there’s no standard ROI methodology, then you should – along with the financial professionals at your company – develop one. So what’s the ROI of your spending in digital transformation, cybersecurity and cloud-first/cloud migration?

How Good are the Technology Leaders?

This is perhaps the hardest question on the list. Not because the data itself is hard to find, but because the overall ROI is likely to be poor – or worse. If that’s the case, then there’s definitely some blame blowback onto the team. Put another way, if the annual ROI is poor, it’s time to replace the team, though most companies are loathe to take this somewhat obvious step for all sorts of personal and professional reasons.

Once you get the answers to these questions put them in a dashboard for everyone to see – unless, of course, the answers are – well – not what you think everyone should see. If the data’s hard to find or, worse, explain, consider why that’s the case. Chances are “technology” is not a first (second or third) spending priority. It’s also – as suggested just moments ago – often a hands-off area. If the data reveals poor trends, data-driven solutions are in plain view. So maybe the first line of defense is to scramble the data so no one can see how bad things really are. Otherwise, all of this data would be on the tips of everyone’s tongue. Of course, it’s always possible that data poverty exists because companies have bad internal analytics or their dashboards are bad. It’s possible that no one’s ever linked spending trends with operational or strategic efficiency. Yes, it’s possible, but incredibly unlikely unless everyone’s gone back into time before data-driven management was a thing. But who knows how many executives are still living in the the 20th century. Anyone come to mind?