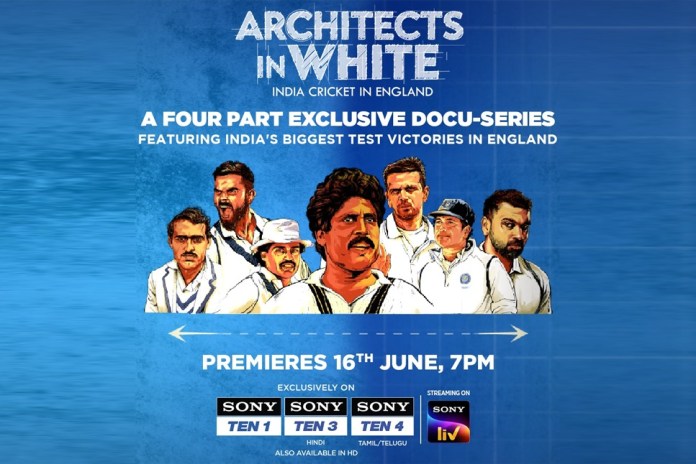 India Tour of England: Sony Sports celebrates India’s Greatest Test Wins in England: After narrating the heartfelt story of the underdog Team India with its docuseries ‘Down Underdogs– India’s Greatest Comeback’, Sony Sports Network prepares to showcase another riveting story about the long-standing Test cricket rivalry between India and England. Follow IND VS ENG and India Tour of England Updates with InsideSport.IN

Narrating the stories of Indian cricketers who orchestrated India’s success against all odds, the broadcaster presents ‘Architects in White – India Cricket in England’ that celebrates the architects of India’s Test wins on English soil.

For India, playing against England is more than just another cricket rivalry; it is about national pride! The docuseries relives India’s most historic Test wins against the nation that brought cricket to India. ‘Architect in White – India Cricket in England’ recounts India’s Test wins over England in the last nine decades.

“After successfully bringing the story of India’s greatest Test win over Australia, we take immense pride in showcasing the stories behind India’s greatest Test wins on English soil. Architects in White celebrates the legends who drew the blueprints for India’s 9 Test wins in 9 decades in England. The four-episode feature series celebrating the heroes that made it happen will also be telecast in four languages so we can serve more cricket fans across India.”

“For a long time in cricketing history, England v India, was a bigger rivalry than any other. We all wanted to beat England in England – that was the main thing.”

“In my playing days India had some great players – Sunil Gavaskar, Sachin Tendulkar and a whole host of names that add to the magic of these contests. The game is not just in white, it is in all sorts of colours. It is around the world, it is fascinating, it is glamourous. For people like me, it is the men in white, the Architects in White who are the absolute heroes.”

“Architects in White revisits the Test series against in England. Lord’s is where I took a 5-wicket haul which played a big role in India registering their first-ever Test win at the venue. This was the revival of Chetan Sharma as this had come on the back of the Javed Miandad episode in Sharjah where I was hit for a six leading to India’s loss.”

“India have not won many times in England – only 9 wins over the 90 years. But each of them has been special and each of them has put a brick in the story of coming to terms with overseas conditions, shaken off the tag of a team who cannot play anywhere other than dusty, spinner pitches of India.”

Follow IND VS ENG and India Tour of England Updates with InsideSport.IN