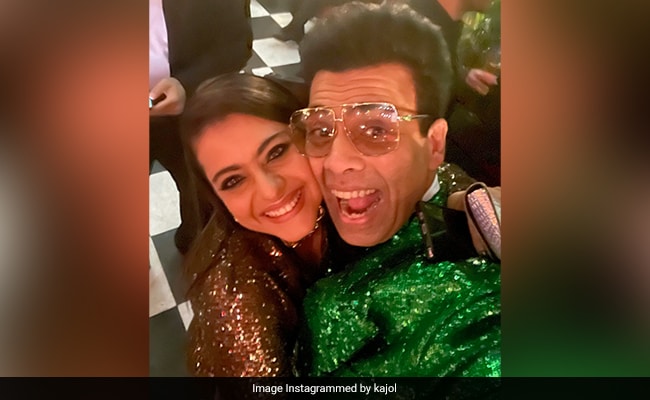 Karan Johar had the biggest birthday party in town on Wednesday as he turned 50. Given just how popular the filmmaker is in the world of Bollywood, it is not surprising that actors – young, old and upcoming – marked their attendance at the bash. On top of the list of well-wishers who turned up to celebrate the director’s special day is Kajol, one of Karan Johar’s oldest and closest friends in the industry. On Wednesday night, Kajol turned heads as she arrived at Karan Johar’s celebration and posed for the photographers gathered outside YRF Studios, the party venue. The actress also shared an inside photo from the glitzy bash later in the night.

In a selfie taken at the party, Kajol and Karan Johar are all smiles on the happy occasion as they share a hug. In the caption, Kajol wrote, “All teeth, smiles and glitter. Happy happy birthday, Karan Johar. Love you.”

Kajol has played the female lead in three of the six full-length feature films directed by Karan Johar. She has also appeared in guest roles in several of Karan Johar’s directorial and production ventures.

Meanwhile, Gauri Khan – one of Karan Johar’s best friends in the industry and superstar Shah Rukh Khan’s wife –  left no stone unturned to make the filmmaker’s birthday special. The designer was present at Karan’s house on the intervening night of May 24 – May 25 as well as the grand birthday party on Wednesday.

Dressed in a sparkly gold number, Gauri Khan posed for the photographers outside the party venue along with friend and designer Maheep Kapoor.

Designer Manish Malhotra too dropped a selfie with Gauri Khan from the party and tagged her in the picture.

Gauri Khan had also shared a video from the wee hours of May 25 as Karan Johar rang in his birthday in the presence of close friends such as Farah Khan, Ayan Mukerji, and Apoorva Mehta, Maheep Kapoor, Sohail Khan’s ex-wife, Seema Kiran Sajdeh, and others.

Sharing a video of the filmmaker cutting the birthday cake, Gauri Khan said, “Happy Birthday. You are truly the One and Only.”