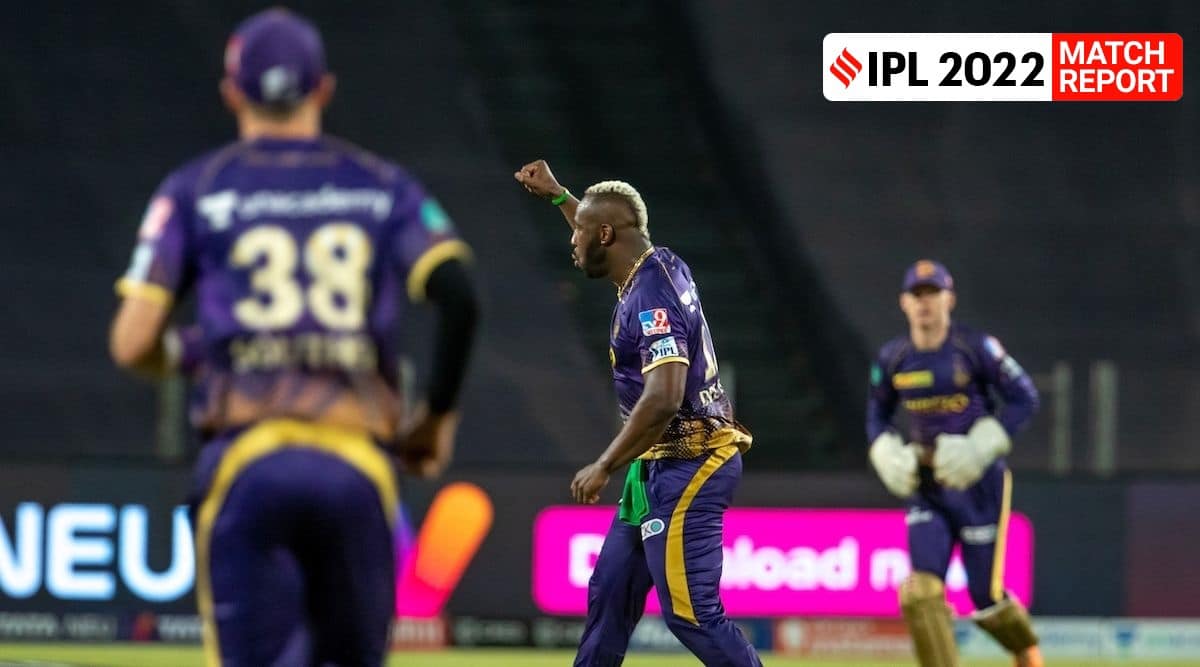 The runs were coming at crawl in the Powerplay for Kolkata with just two runs in the previous two overs until Nitish Rana decided to step on the gas in the 5th over with an attack on T Natarajan. As is his wont, Rana moved back and forth in the crease, predetermining to an extent but creating his own length, and smashed two sixes and a four. He then upper cut Marco Jansen for a six next over to help loot another 17 runs. After all this hard work, he sort of gave his wicket away to Umran Malik, helping a back-of-length delivery on his pads straight to deep backward square-leg.

Andre Russell went the opposite way to Rana. He tried to break free, but with the seamers Bhuvneshwar Kumar and Natarajan keeping it tight, he hung in there. He didn’t throw his wicket away, holding himself for a final assault in the last over. Not that he was quiet until then, but he didn’t take extra risks. He waited for loose deliveries but the seamers kept hitting the yorker length or well-outside off line to him. So he waited. For the second time in the tournament, Kane Williamson chose to go with a spinner in the final over to Russell. Washington Sundar, who has missed many games to injury, was up against Russell, but he couldn’t land the ball a couple of times. Both were slung into the leg-side stands. Once, Russell swiftly went down on his knee to deposit the ball to midwicket stands. 20 runs came in the over as Kolkata finished on 177, on a pitch where the ball wasn’t coming on that easily.

“I was a bit miserable [when he couldn’t hit the seamers] but I said let’s just stick with it since I know if I stay till the end we can get 170 … If we can win by 20 runs, run rate is going to be important at the back end,” Russell would say at the innings-break, and that’s exactly how it would play out.

Dre Russ ticked all the boxes with bat & ball in Pune and bagged the Player of the Match award as @KKRiders beat #SRH. 👏 👏

Russell himself would play a part with the ball, as he took out the opener Williamson, who failed to connect with a paddle scoop and was bowled. He returned in the 18th over to ensure Kolkata would win with more than 20 runs by dismissing Washington Sundar and Marco Jansen. In his mid-innings interview, Russell had identified the areas to bowl on this slow track – hit the hard length and allow the ball to hold up on the pitch, and that’s exactly how he and his fellow seamers went about their task.

The @ShreyasIyer15-led unit register their second win on the bounce as they beat #SRH by 54 runs to bag 2⃣ more points. 👌 👌 #KKRvSRH

Abhishek out, Hyderabad out

Somehow, as the tournament has progressed, it has come to this: Opposition’s chances against Sunrisers Hyderabad escalate if Abhishek Sharma’s wicket is taken. Abhishek’s career has taken an interesting turn this season after he was made an opener; where his friend from teenage Shubman Gill took the elevator to success, Abhishek’s taken the stairs but he is slowly getting there. It was another fine knock from him, with shots all around the park, and against pace and spin. He cover drove and whiplashed Tim Southee, pulled the short ones from Russell and launched into an assault against Sunil Narine, walloping two successive sixes over long-on. But with the asking rate climbing, he tried to slog Varun Chakravarthy, who had smartly bowled a slider outside off, and holed out. The usually reticent Chakravarthy ran all the way to his skipper Shreyas Iyer in the deep, the wicketkeeper Sam Billings, who took the catch, too was on a run and most fielders converged to celebrate. That said much about the importance of Abhishek’s wicket and it was to be validated as Hyderabad unsurprisingly collapsed thereafter. As Hyderabad slip further down the points table, KKR got the big win they were after.