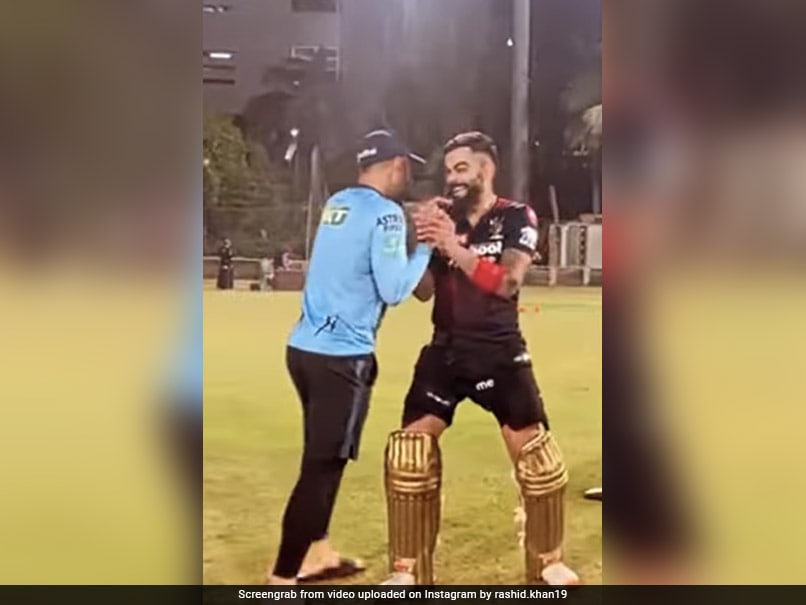 Rashid Khan and Virat Kohli are known to be good friends off the field, with the duo acknowledging each other plenty of times on social media. Ahead of Gujarat Titans’ (GT) Indian Premier League (IPL) 2022 match vs Royal Challengers Bangalore (RCB) on Thursday, the Afghan spinner took to Instagram to share a hilarious interaction with Kohli, where the former RCB skipper could be seen imitating Rashid’s famous ‘snake’ shot during a practice session. The 23-year-old also captioned the video as, “Even Virat Kohli bhai knows about my (snake emoji) ya (gun emoji) shot”.

Here is the video:

In the video, Kohli could be seen trying to imitate Rashid. During the video, the former India captain quipped, “Ye bhaisaab alag hi khelte hain. Gun shot maartein hain”, as the pair burst into laughter.

In a video posted by IPL on Twitter, Rashid stated, “I call it the Snake Shot. When a snake bites someone it springs back. When the ball is too full, I can’t finish the shot completely. My body position doesn’t allow me to finish the shot. If I try to do that, I can’t generate the power. So, I have worked on it a lot and strengthened my wrists for it”.

In the ongoing season, Rashid has registered 72 runs in 13 games, including an unbeaten match-winning knock of 31 runs to help his side defeat SunRisers Hyderabad (SRH).

While bowling, Rashid has taken 16 wickets for GT.

Gujarat have also qualified for the playoffs and are currently on top of the IPL 2022 Points Table.