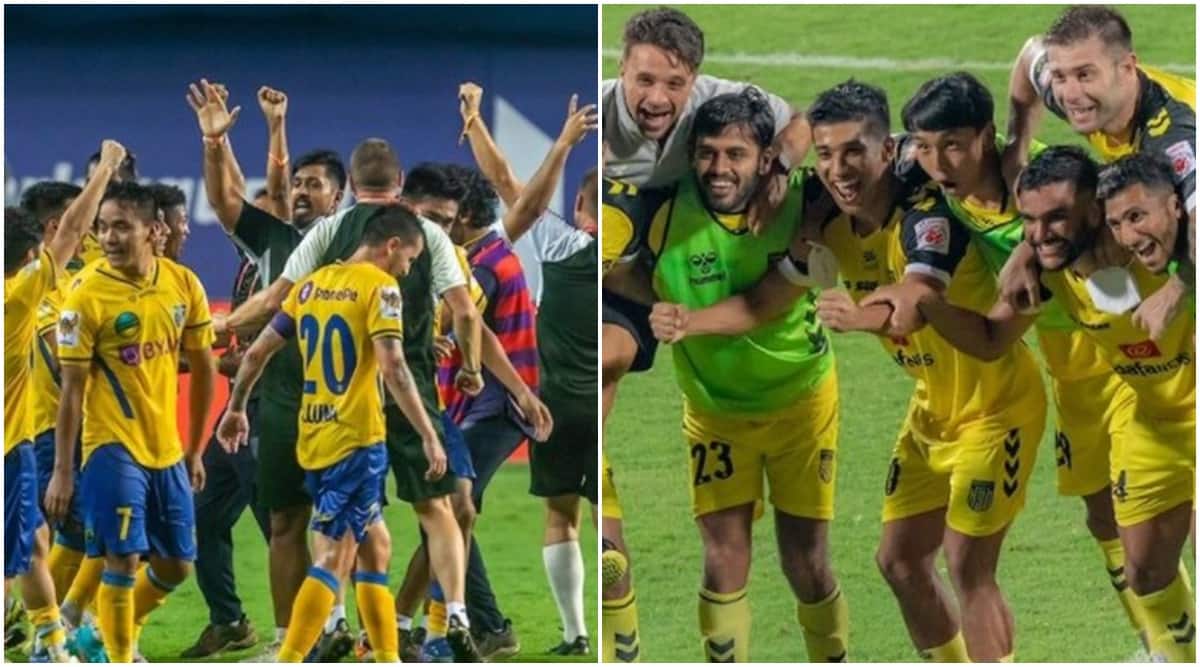 The Indian Super League will have a new winner after Kerala Blasters go up against a resurgent Hyderabad FC in the final on Sunday.

While it would be Hyderabad’s maiden final appearance, Kerala Blasters will be competing in the final for the third time.

In 2014 and 2016, Kerala Blasters had made it to the finals, but on both occasions, they had lost to erstwhile ATK, and thus their dream of winning the coveted ISL Trophy remained unfulfilled.

Hyderabad FC qualified after a 3-2 win on aggregate over ATK Mohun Bagan despite losing the second leg of the semi-final 0-1. Hyderabad had won the first leg 3-1 through goals from Bartholomew Ogbeche, Yasir Mohammad and Javier Siverio.

The stage is set for a new #HeroISL Champion 🏟🏆

On the other hand, Kerala Blasters entered the ISL final for the first time since 2016 after playing out a 1-1 draw with Jamshedpur FC and pipped the League Shield winners 2-1 on aggregate over double leg semi-finals. In the first leg, Sahal Abdul Samad scored the only goal in a 1-0 win for Kerala.

For Hyderabad, a lot would depend on how their star striker Bartholomew Ogbeche fares against the Kerala defence.

The 37-year-old Nigerian forward, who is the season’s leading goal-scorer with 18 strikes to his name from 19 matches, and is the highest goal-scorer in ISL history with 53 goals.

However, Ogbeche would need support from other strikers like Javier Siverio, who has netted seven times this season, and Joel Chianese (4 goals).

Also, the role of midfielder Joao Victor, the captain, who has five goals to his name would also be crucial.

Victor could serve as a key link between strikers and defence and with his prowess can turn the game on its head.

Hyderabad also possess an array of good mid-fielders including Aniket Jadhav, experienced Halicharan Narzary, Souvik Chakrabarti and they will have to play to perfection.

Hyderabad custodian Laxmikant Kattimani would be aiming to keep a clean-sheet.

Hyderabad also have 46 goals this season, the highest for any team, 10 more than their opponents Kerala Blasters and thus going into the final, they could have a slight upper hand.

Hyderabad head coach Manolo Marquez said that the season was hard for his team and they were happy to be in the final.

“We are very happy to be here. It was a hard season. It was challenging mentally to be in a bio-bubble for five months. Our strength is the group we have, players and staff. We all work towards the same direction,” Marquez said on the eve of the mega clash.

“It’s only one game and anything can happen tomorrow. We know we have a hard opponent but I am sure they think the same about us as well,” added the head coach.

For Kerala, their top goal-scorer this season has been their star striker Jorge Pereyra Diaz (8 goals). And for them, the 31-year-old Argentine will have to be at his best and need to fire on all cylinders.

Diaz and Alvaro Vazquez form a lethal pair, and the Hyderabad defence would indeed be wary of them.

Kerala mid-fielder Sahal Abdul Samad has sustained a thigh injury but the team’s head coach Ivan Vukomanovic said that he could be available for the summit clash.

“He (Sahal) was doing practice with the medical staff in the morning but we will have to see him after the training and probably he could be available,” Vukomanovic said at the pre-final press conference.

The head coach also reckoned that the final is the “easiest” to play because players are motivated and prepared.

A lot will also depend on the mid-field duo Lalthathanga Khawlhring and Ayush Adhikari, ably supported by Marko Leskovic and defensive partner Hormipam Ruivah, fresh from a national squad call-up.

Also, this would be the first occasion since the outbreak of COVID-19 that the fans would be in the stands cheering for their favourite teams and a 100 per cent crowd has been allowed, so a ‘sea of yellow’ is expected to turn up at the venue.

Also, Indian football legend IM Vijayan and chief national coach Igor Stimac would be in attendance for the summit clash.