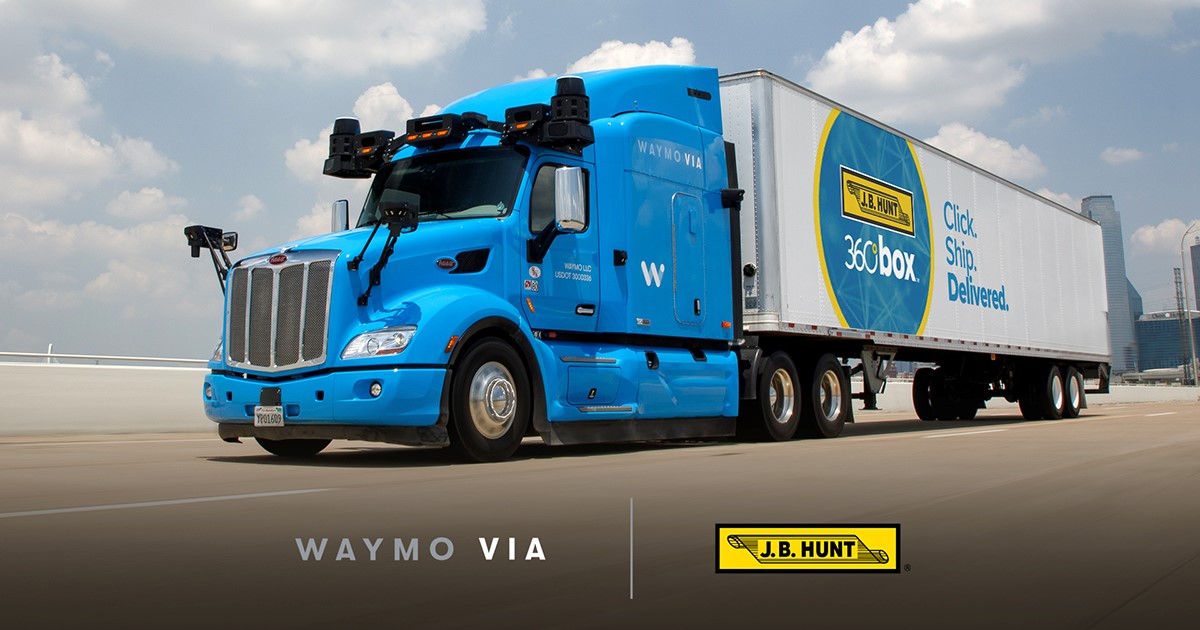 J.B. Hunt Transport Services Inc. announced Friday (Jan. 14) a long-term, strategic alliance with Waymo Via as the two companies expand efforts to integrate commercial autonomous driving technology in transportation and logistics, with the ultimate goal to complete fully autonomous transport in Texas in the next few years.

In June, the Lowell-based carrier began collaborating with the autonomous technology developer to autonomously move freight in Texas for one of J.B. Hunt’s customers. Mountain View, Calif.-based Waymo is a subsidiary of Google’s parent company, Alphabet. Waymo Via is Waymo’s autonomous freight transportation segment.

“Our pilot last year with Waymo Via really helped us get a hands-on understanding of how autonomous driving technology could be implemented within our operations,” said Craig Harper, chief sustainability officer and executive vice president at J.B. Hunt. “This strategic alliance will continue that momentum and further explore the intricate details that would make this a value-driven solution for customers. We believe autonomous driving technology will help us create the most efficient transportation network in North America, and our collaboration with Waymo is a pivotal step toward fulfilling that mission.”

According to a news release, the expanded collaboration will include multiple pilots to further analyze the operational capacity of Waymo Via, the company’s autonomous Class 8 trucking unit powered by the Waymo Driver, to address customer needs in realistic scenarios. A Class 8 truck is the largest truck class. The upcoming pilots will take place along the same route used for the 2021 pilot.

“Our collaboration with J.B. Hunt in 2021 was incredibly fruitful,” said Charlie Jatt, head of commercialization for trucking at Waymo. “Establishing this strategic alliance marks an exciting moment for our relationship, and more importantly, paves the way for us both to help grow the foundations for successful deployment and to capitalize on the benefits of autonomous driving technology. We’re incredibly grateful for our relationship with J.B. Hunt and their shared vision for the safety and efficiency benefits we can bring to the industry at a critical time.”

J.B. Hunt and Waymo also will look to merge autonomous driving technology and the digital freight marketplace. J.B. Hunt’s technology platform, J.B. Hunt 360, matches shippers and carriers digitally and was responsible for processing 1.2 million loads in 2020. Waymo has more than a decade of experience building autonomous driving technology, having driven more than 20 million miles on roads in 13 states and 20 billion miles in simulation. With the technologies combined, Waymo Via would be accessible through J.B. Hunt 360 and is expected to improve transportation efficiency, the release shows.

The collaboration also includes operational and market studies to refine the commercial readiness of the driving technology.