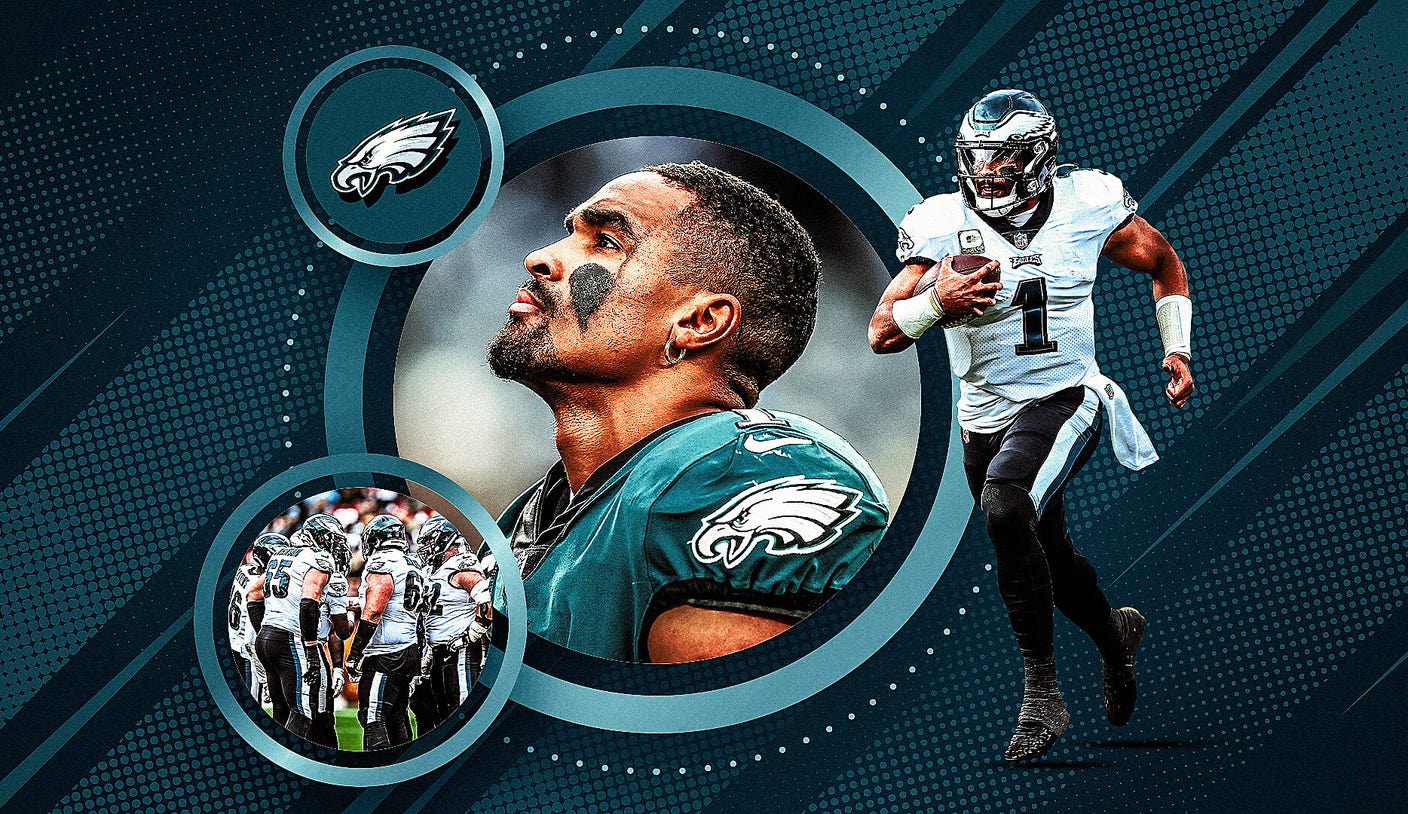 Jalen Hurts woke up late. He hurriedly slid into some shorts and a T-shirt and headed to the weight room for testing day at the University of Alabama during his freshman season.

Hurts had an early final and arranged for a 6:30 a.m. appointment with his strength coach to test his max on the hang clean.

Hurts touched his toes a couple times, took to the platform and popped up 315 pounds to his chest.

“He runs over to the facility, and it’s like freezing outside, and he’s barely wearing any clothes, doesn’t stretch or anything, and he hang-cleans like 315 — like an ungodly amount,” recalls Josh Palet, a fellow quarterback and teammate of Hurts during their time at Alabama. “And he dropped it and was like, ‘Am I good?’ And they were like, ‘Yeah, you’re good.’ He just walked out.”

Unflappable. Poised. Workaholic. Teammates and coaches use those words to describe Hurts.

Jalen Hurts discusses the expectations that he has for himself and the Philadelphia Eagles.

In his second NFL season, Hurts seized control of the Philadelphia Eagles’ starting job after the franchise moved on from Carson Wentz in the offseason.

The Eagles traded Wentz to the Colts for first- and third-round picks. The Eagles now have three first-round selections in the upcoming draft, but would be wise to use that draft capital to fill non-quarterback needs with the way Hurts performed in the second half of this season.

After a 2-5 start, a scheme change on offense has the Eagles (9-8) back in the playoffs under first-year head coach Nick Sirianni for the first time since 2019, winning seven of their last nine games.

The maturity and elevated play of Hurts is the central reason for Philadelphia’s turnaround.

In 15 starts, the QB, who starred collegiately at Alabama and then Oklahoma, completed 61 percent of his passes for 3,144 yards, with 16 touchdown passes and nine interceptions. Hurts led all quarterbacks with 784 rushing yards.

According to Next Gen Stats, Hurts also led all QBs in rushing yards on designed runs (337) and touchdowns (eight).

A question heading into the season, Hurts, 23, solidified his hold on the starting job. Philadelphia’s run-based offense faces a vulnerable Tampa Bay Buccaneers defense in an NFC wild-card game (Sunday, 1 p.m. ET on FOX and the FOX Sports app), as the Eagles try to play keep away from Tom Brady.

The FOX Bet Live crew discusses the spread for Eagles-Bucs and whether Philly can keep it close.

Sirianni said he and his offensive coaching staff made the switch after his team’s Thursday night loss to the Buccaneers earlier this season, a 28-22 setback in Philadelphia on Oct. 14.

After the defeat, Sirianni took time to self-scout and re-evaluate the offense. The result? A shift to more heavy formations and a ground game built around Hurts’ ability to run the football.

Using those heavier formations, the Eagles have led the league in rushing since Week 8, averaging 190 rushing yards per contest.

However, Philadelphia faces a stout Tampa Bay run defense that holds teams to 93 rushing yards a game, No. 3 in the NFL.

“As an offense, we kind of just revolutionized and evolved, in terms of who we are and our identity,” Hurts told reporters this week. “I’ve said it all year, that it’s coming. I’ve said different things to ignite the growth and where we are now.

“Early on, we kind of were searching for who we were, what we wanted to do and how we wanted to do it. And now, we’re fine-tuning some things, and we’ve gotten good at doing a lot of different things. It just comes down to us, executing our job, knowing our job and doing our job.”

Palet witnessed Hurts’ ability to take over a team in college, serving as a 23-year-old walk-on quarterback when Hurts was an early enrollee as a freshman at Alabama.

“From Day 1, Jalen was extremely confident,” Palet said. “He would tell me things like, ‘I’m going to be the starting quarterback, these guys don’t even know.’ And in my head I was like, ‘Man, you’re crazy. You’re a freshman. [Alabama head coach Nick] Saban never starts freshman quarterbacks.’ But he had extreme confidence. He told me he was going to be the guy, and he became the guy. Jalen was extremely, extremely confident, even as a 17-year-old kid.”

He emerged as Alabama’s starting quarterback as a true freshman, taking over for Blake Barnett against USC. After fumbling the ball on his first snap, Hurts went on to pass for 118 yards and two touchdowns in a 52-6 runaway win over the Trojans.

Hurts went on to lead the Crimson Tide to a 14-1 record and victory in the SEC Championship game over Georgia. But he lost to the Deshaun Watson-led Clemson Tigers in the national championship.

Colin Cowherd advises bettors to wait closer to game time before placing a bet on the Philadelphia-Tampa Bay matchup.

Hurts showed unusual poise and grace in handling his benching a year later at halftime of Alabama’s win over Georgia in the national title game, when Tua Tagovailoa took over.

In his junior season, Hurts proved he didn’t shut it down when Saban called on him to help lead Alabama to victory over Georgia in the SEC Championship after Tagovailoa’s injury.

“That shows his character and just the type of guy he is,” said Eagles receiver DeVonta Smith, who played with Hurts at Alabama. “He is not going to run from any type of situation. He’s going to compete, no matter what. And it was him just always being ready any time his number is called.”

Hurts transferred the following season to Oklahoma for his senior year, He proved to NFL evaluators that he can still play, posting 3,851 passing yards, rushing for 1,298 yards and finishing runner-up to LSU’s Joe Burrow for the Heisman Trophy.

So, when Hurts supplanted an ineffective Wentz during his rookie season in Philadelphia, Palet was not surprised.

“He wants that smoke,” Palet said. “He came in [at Alabama] looking for smoke for sure, and I respected it because I was like, ‘You’re crazy. Everybody else is way older than you, and they’ve been here.’

“The good thing, too, is he’s really easy to get along with, so the older guys really liked him because he was so mellow and so cool. He wasn’t going to be pushed around. So, him acting like it’s his team, they were like, ‘All right, if it’s your team, we’ll act like it’s your team, too.’

“I knew it was going to happen with Carson Wentz. I was like, ‘This is the same Alabama thing all over again. Even though Carson Wentz is the guy, he’s going to be the starting quarterback.’”

Rick Neuheisel, a college football commentator for CBS, notes that Hurts showed great resiliency through his stops at Alabama, Oklahoma and Philadelphia — something all successful NFL signal-callers need.

“Nobody has been more willing to work and gotten more from their work in my mind than Jalen Hurts,” Neuheisel said. “I think he’s going to continue to evolve and be as good as people want him to be. If you coach him with belief, I think you’re going to get great results.”

Bucky Brooks breaks down the biggest areas of concern for each NFC playoff team — and how they might be able to fix their flaws.

Sirianni appears to be in it with Hurts for the long haul.

“We’re still meeting every Friday to continue to try and grow our relationship, to continue that connection and continue to work on the game plan,” Sirianni said. “And then off to my office just to continue to talk about anything outside football, or football itself.

Eric D. Williams has reported on the NFL for more than a decade, covering the Los Angeles Rams for Sports Illustrated, the Los Angeles Chargers for ESPN and the Seattle Seahawks for the Tacoma News Tribune. Follow him on Twitter @eric_d_williams.