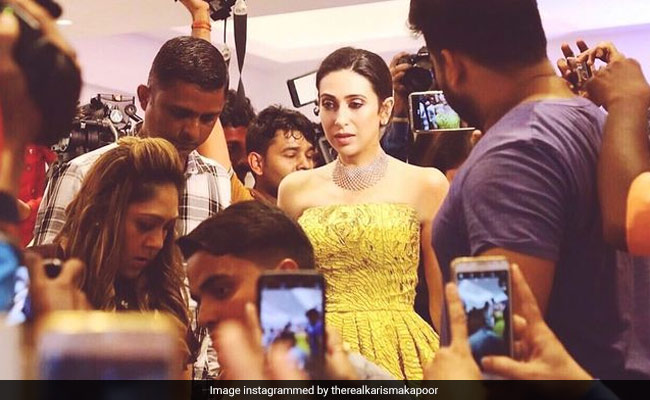 It’s been a week of throwbacks and while the one shared by Karisma Kapoor today is nowhere as ancient as Priyanka Chopra’s picture of her 17-year-old self, it strikes a chord in these times of masks and social distancing. The photo Karisma posted is of her at an event of some sort, surrounded by people, cameras and phones, some of which are practically in her face. The proximity of both people and cameras is startling, so accustomed are we now to keeping six feet between us and the world at all times. “Those were the days of live events and thoughts in crowded rooms,” Karisma Kapoor captioned her throwback post. It is Throwback Thursday after all.

In case you missed Priyanka Chopra’s extreme throwback shared earlier this week, here it is again:

Karisma Kapoor’s Instagram feed contains a fair number of throwbacks, many of them stills from her films. She recently shared this picture from Nineties hit Coolie No 1, co-starring Govinda. Karisma borrowed a line from a hit song from the film for her caption: “Tujhko mirchi lagi to main kya karoon?”

Coolie No 1 was directed by David Dhawan who recently remade the film starring his son Varun and Sara Ali Khan in the lead roles – the remake was poorly received by critics and cine-goers alike.

The original Coolie No 1 was one of a series of hits that Karisma Kapoor appeared in opposite Govinda, like Raja Babu and Saajan Chale Sasural. Karisma is also known for her work in films like Fiza, Raja Hindustani, Dil To Pagal Hai and Zubeidaa. She was last seen in the web-series Mentalhood.