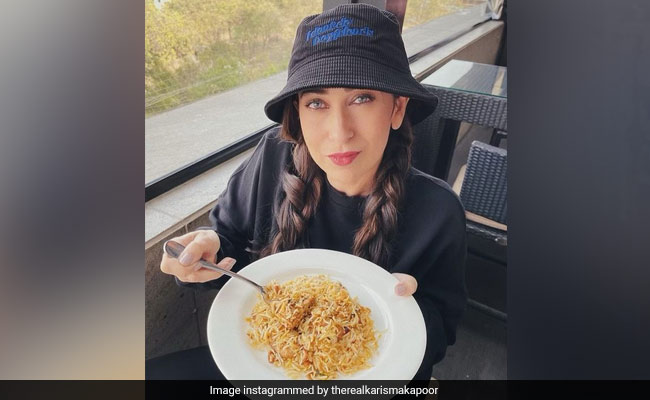 Indians share an undefinable and impeccable connection with biryani. The sizzling spices and the heady aroma of this rich dish are bound to make a foodie fall for it with every morsel. The clean flavours are loved by one and all. And that includes actress Karisma Kapoor, too. She professed her love for biryani in a recent social media post. The actress shared photos where she is seen diving into a plate of biryani. Taking a cue from the typography on her hat, Karisma wrote in her caption, “I don’t do boyfriends… I do biryani.” She added the hashtag, “Lolo loves”.

Karisma Kapoor is enjoying the season in many ways. Food is only a part of it. Recently, she wished a happy birthday to her sister Kareena Kapoor’s son Taimur. As the aunt-nephew duo posed playfully for the lens, Karisma had a heart-warming wish in store for the kid. She wrote, “Big boy. Happy birthday to our jaan. Love you too much.” The hashtag stole our hearts. She wrote, “Lolo ma loves Taimur.”

Karisma Kapoor loves to keep her relationships strong and she enjoys family get-togethers. Recently, she was seen in the “sister squad” of cousin Riddhima Kapoor Sahni, daughter of Neetu Kapoor and late actor Rishi Kapoor. The photo from the get-together featured Kareena Kapoor too. The women posed for the lens in stunning clothing. Riddhima shared the photos on Instagram and captioned the image, “Sister-sister”, and added the hashtag, “sister squad goals”.

Winter has been a time of fam jams for many Bollywood celebrities. Karisma Kapoor was no exception. She was recently seen enjoying a hearty Japanese lunch with Randhir Kapoor, Neetu Kapoor and aunt Rima Jain. Karisma posted a selfie from the get-together and captioned it, “Family lunches are the best. Missing a few.”

On the work front, Karisma Kapoor was last seen in the web series Mentalhood last year.