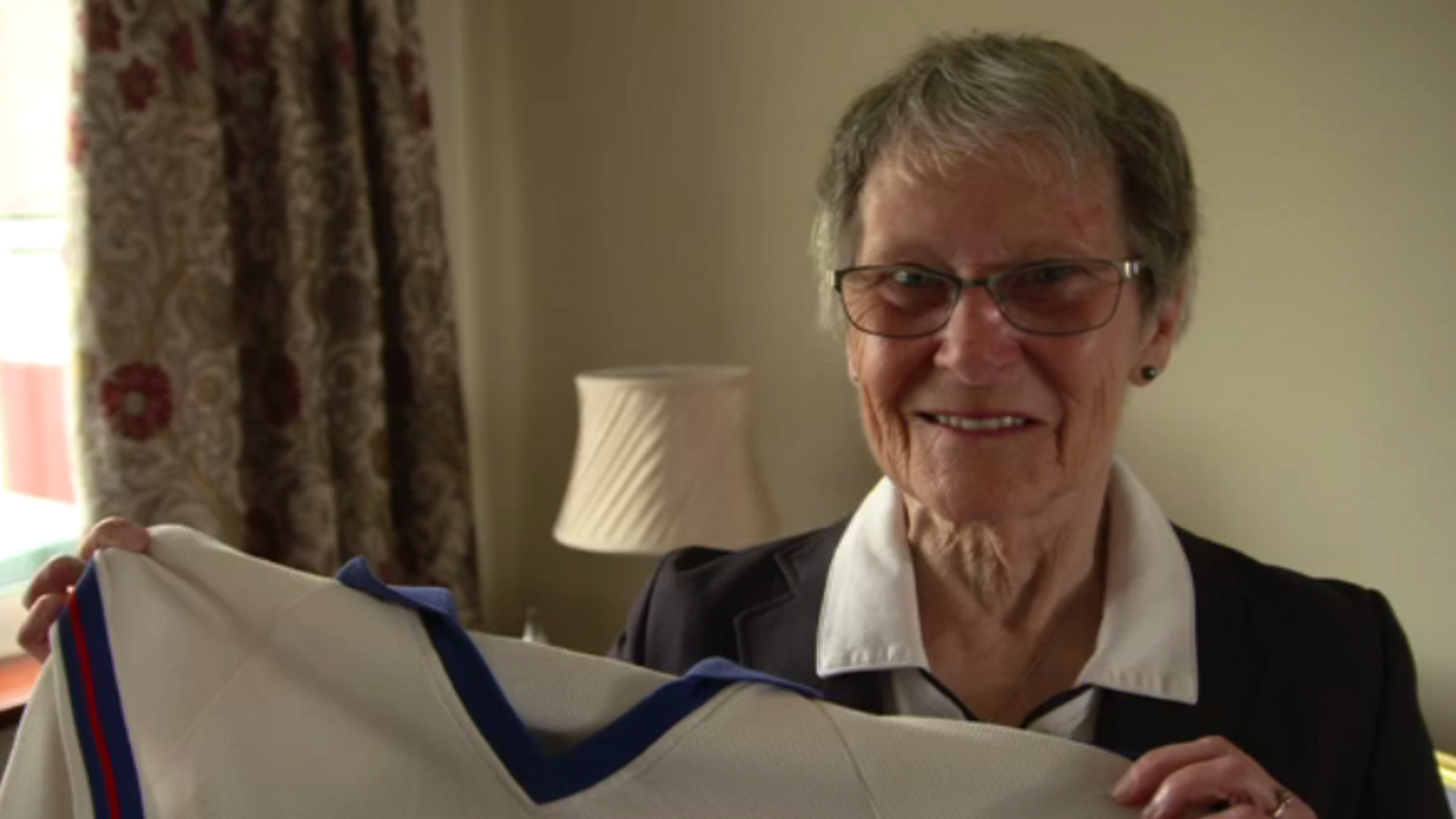 As part of Sky Sports News’ Leading the Lionesses series ahead of the Women’s Euros, England Women’s first official captain, Sheila Parker, discusses her career journey, what it was like playing in her era and how the landscape of women’s football has changed since she was a player.

Considered one of the pioneers of the sport in the 60s and 70s, Parker was appointed as the first official captain of the England Women’s team put together in 1972 by the Women’s Football Association. Parker signed for the famous Dick, Kerr Ladies, later joining local side Chorley Ladies.

Parker started playing at the age of 13 and went on to captain England from 1972 to 1976. She told Sky Sports News: “I used to go watching Chorley FC on the recreation ground where I used to live, and I went to their site to watch them play. And I loved seeing the slide tackles and I thought how good that was.

“I used to love kicking a ball about and lads used to play on the recreation ground, and I asked if I could play with them originally and they said, ‘No, you don’t play football.’

“So, I just kicked a ball about on my own and then they noticed it and said, ‘You can join us if you want.’ So, I joined in with the lads and from then on it was just marvellous.”

In 1971, the ban preventing women’s football fixtures being played on FA pitches was lifted and just a year later, at the age of 24, Parker was selected for the team.

Sky Sports News asked Sheila to take us back to 1972 when the first official England squad was announced and what it felt like to lead the side. She reflected: “I think because I played and I enjoyed it so much, that’s probably what put me in their minds because they must have seen the sport coming out.

“I couldn’t believe it. And I thought in my mind it is good because of the joy of playing the game. You being allowed to captain a side in the game. So, yes, I was over the moon.”

She also discussed about her family’s reaction to the news, adding: “They only played very few and far between the games and in various places. There weren’t many round where I lived. Not much of the family could get there, but those who could manage to make it, they were thrilled to bits for me.”

Parker was captain for four years until 1976, leading England to victory in the first ever home international championships. She was eventually succeeded by Carol Thomas.

When discussing her leadership style, Parker said: “I just told them to play football and slide tackle if they had to do. But to make sure they got the ball and not the players legs or feet. Yes, they all did very well, and I was pleased that I captained them.”

Parker also spoke about her position on the field: “Well, personally, I don’t think the position matters, well in them days it didn’t to me, whether you were a defender, a goalkeeper, a midfielder, a forward.

“If you were captain, it was such proud moment and all the players gathered around you, so it was good.“

Parker would ultimately go on to win six Division One titles – five with Preston, one with St Helens – as well as five League Cups.

After an exciting career and being a trailblazer in her era, what did being England captain mean to Parker?

“I’m trying to get it to hit home, still! Because I enjoyed it so much and travelled to various countries.

“I really enjoyed playing the game and doing something you enjoy, it’s very hard to forget. No matter what age you are, you always think back to the times that you enjoyed and playing football was one of those.”

The landscape of women’s football has changed over the years and according to Parker, so has the role of England captain.

She said: “To me, the ladies’ game has changed over the years as well. Nowadays, there’s so much money involved.

“And in my days, we had to pay sometimes to play, and money was very hard to come by in those days, but it seems to have turned completely around now.

“They [the current England team] probably wouldn’t play like they play if I was captain.

“Hopefully they’d be playing like we used to play years ago, and the sport was so loved in those days. It is nowadays, I believe, but to me I can see the difference in the bygone years and the years that are now coming up.”

Parker made 33 appearances for her country and with the Women’s Euros this summer, Sky Sports News asked her if she had any advice for current England captain Leah Williamson.

“Just play football and enjoy the game and all play together and look after each other on the field, and make sure that you do the passes, and they get to where they are going.

“Don’t just give the ball away. Just play the game that hopefully you love, like I did.”

Keep up with all the latest from Euro 2022 across Sky Sports and Sky Sports News this summer.

Coverage will be anchored by Sky Sports WSL presenter Caroline Barker, alongside Jessica Creighton and Kyle Walker. Meanwhile, Karen Carney, Sue Smith, Courtney Sweetman-Kirk and Laura Bassett will give analysis throughout the tournament.

The pundits and presenters will work from the Sky Sports Women’s Euro 2022 Mobile Presentation Bus, which will follow the Sky Sports News team around the country to the various stadiums where matches are being played.

In addition, Sky Sports’ Essential Football Podcast will be rebranded for the tournament to Sky Sports Women’s Euros Podcast rom 21 June. Hosted by Charlotte Marsh and Anton Toloui, it will feature exclusive news and player interviews in addition to a strong programme line up around the tournament.

Group A: England vs Austria – kick off 8pm, Old Trafford

Group B: Spain vs Finland – kick off 5pm, Stadium MK

Group B: Denmark vs Finland – kick off 5pm, Stadium MK

Group A: Austria vs Norway – kick off 8pm, Brighton and Hove Community Stadium

Group B: Finland vs Germany – kick off 8pm, Stadium MK