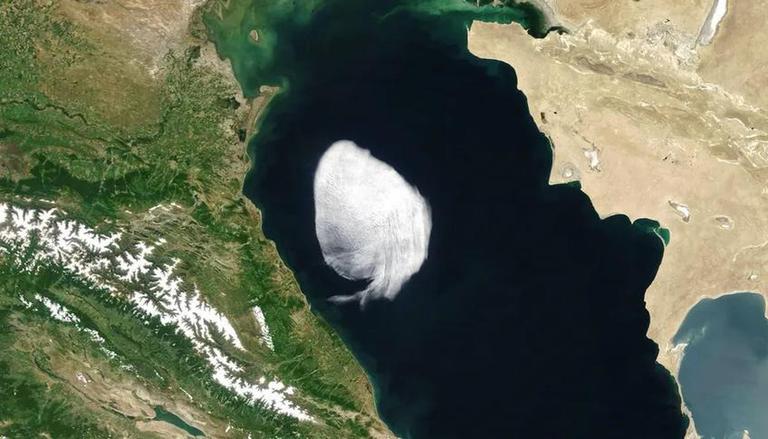 Every now and then, NASA’s weather satellites spot clouds hovering over the Caspian sea locked between the eastern European and central Asian countries. Most recently, a NASA satellite has spotted a cloud that looks rather peculiar, even for the agency. As seen in the image shared by NASA, the cloud looks like a white smudge of paint from an artist’s thumb and NASA believes this makes it stand out from the more typical diffuse and dispersed cloud cover.

Learn about the Stratocumulus cloud

The image was captured by the Moderate Resolution Imaging Spectroradiometer (MODIS) on NASA’s Terra satellite on May 28 and according to Bastiaan van Diedenhoven, this relatively tiny cloud is stratocumulus, as per a NASA blog post. Diedenhoven, an atmospheric scientist at SRON Netherlands Institute for Space Research, explained that the term stratocumulus is made of the Latin word named cumulus, meaning heap or pile, and Stratus, meaning “to spread out” or “cover with a layer”.

These types of clouds form at low altitudes, generally between 600 and 2,000 meters (2,000 and 7,000 feet). As for this little cloud in the image, it formed a layer spanning about 100 kilometres across at an altitude of about 1,500 meters (5,000 feet). Diedenhoven further revealed that the cloud must have formed when the warm, dry air from the Balkans encountered colder, moist air over the Caspian and made it drift across the sea and dissipate when it reached land.

Explaining the sharp edges of the Stratocumulus cloud, Diedenhoven said in a statement, “Sharp edges are often formed when dry, warm air coming from land collides with colder moist air over the ocean, and the cloud forms at that boundary. You often see this off the west coast of Africa but at much larger scales”.

This is not the first time that weather satellites hovering over our planet have caught breathtaking views of the clouds beneath them. Recently, the National Oceanic and Atmospheric Administration (NOAA) shared an image wherein the clouds gave a message during one of the weekends. See for yourself below.