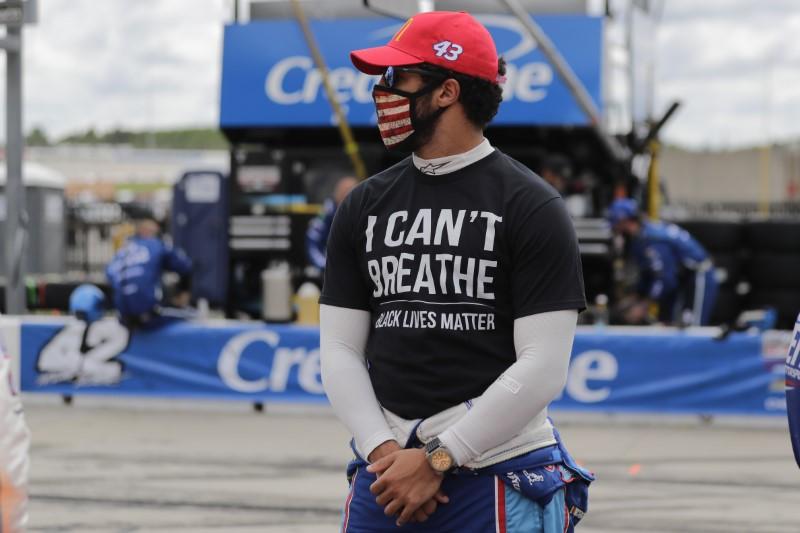 (Reuters) – Bubba Wallace, NASCAR’s only African-American driver, wore a black T-shirt with the words “I Can’t Breathe” and Steve Phelps, the Series president, promised the sport would do more to address racial injustice before the start of a Cup race on Sunday at Atlanta Motor Speedway.

With crowds filling the streets of cities around the world to protest the killing of George Floyd while in Minneapolis police custody, Phelps delivered his message to 40 drivers who brought their cars to a stop on the front straight of the empty speedway before taking the green flag.

“Thank you for your time,” said Phelps. “Our country is in pain and people are justifiably angry, demanding to be heard.

“The black community and all people of color have suffered in our country, and it has taken far too long for us to hear their demands for change.

As Phelps made his remarks, crews stood on the pit road wall, some appearing to wipe away tears, while one held up the same black T-shirt worn by Wallace with Floyd’s last words in which he told officers restraining him that he could not breathe.

“The time is now to listen, to understand and to stand against racism and racial injustice,” added Phelps. “We ask our drivers and all our fans to join us in this mission, to take a moment of reflection, to acknowledge that we must do better as a sport, and join us as we now pause and take a moment to listen.”

Despite a Drive for Diversity program put in place in 2004, NASCAR has seen little diversity in its ranks, with Wallace the only African American competing in the top flight Cup Series.

NASCAR found itself at the center of a race-related controversy in April when Kyle Larson was dropped by his team, Chip Ganassi Racing, for using a racial slur during a livestream broadcast of an iRacing esports event. Larson later apologized for the remark.

Reporting by Steve Keating in Toronto; Editing by Peter Cooney