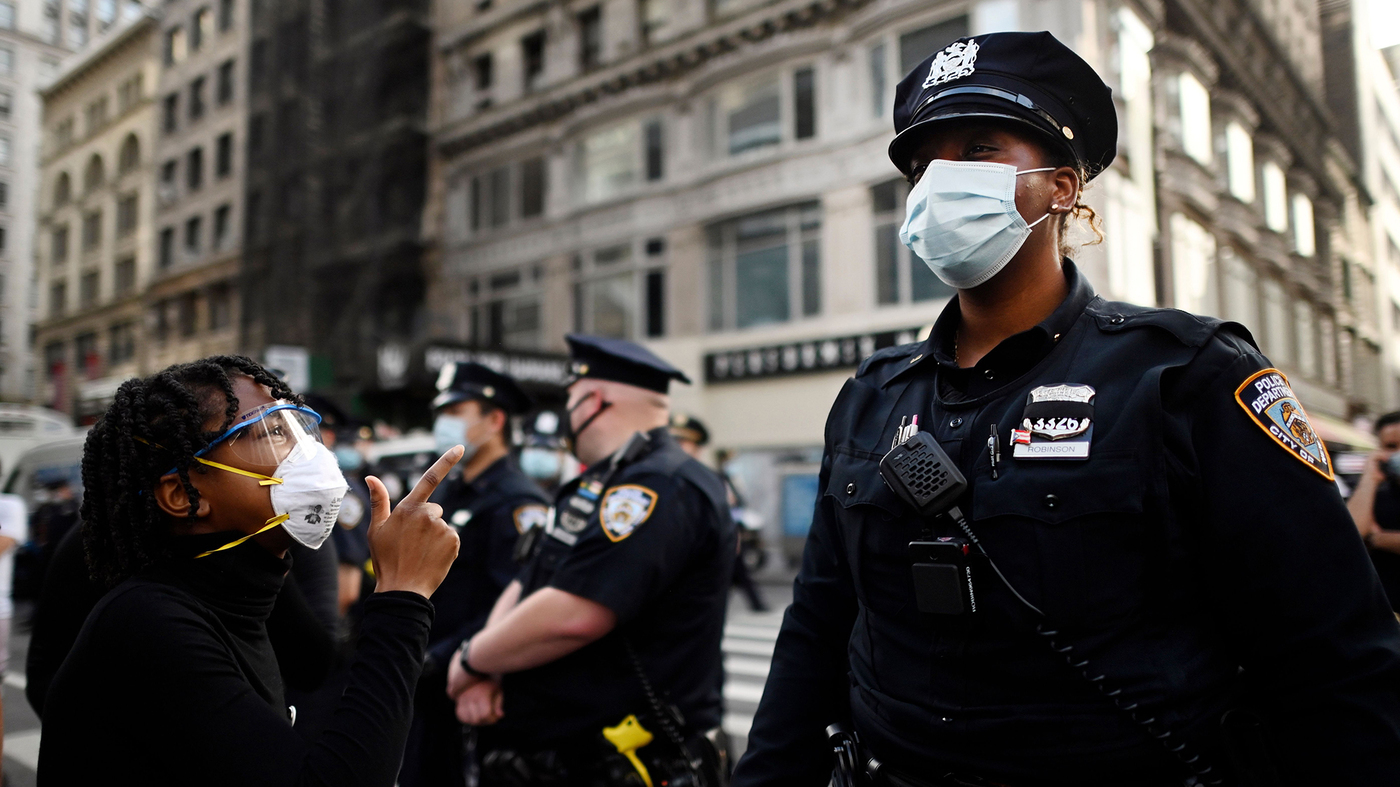 Protestors shout in front of NYPD officers during a “Black Lives Matter” demonstration last summer in New York City, in outrage over the death of a black man in Minnesota who died after a white policeman kneeled on his neck for several minutes. 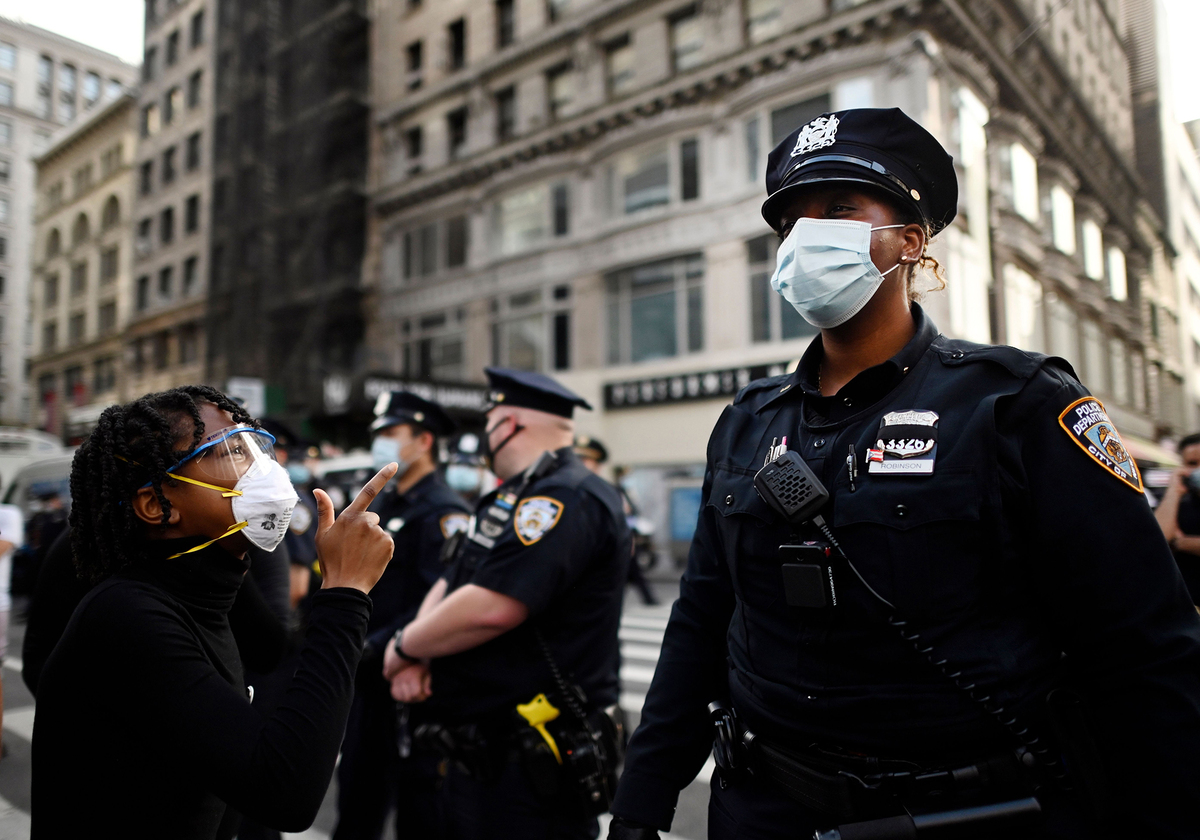 Protestors shout in front of NYPD officers during a “Black Lives Matter” demonstration last summer in New York City, in outrage over the death of a black man in Minnesota who died after a white policeman kneeled on his neck for several minutes.

The Black Lives Matter movement and other activists organized large protests in New York and other states last year, after the Memorial Day death of George Floyd at the hands of police in Minneapolis.

James’ office says it has received “more than 1,300 complaints and pieces of evidence” about the police response to the protests in New York City. It’s now seeking a court order “declaring that the policies and practices that the NYPD used during these protests were unlawful.”

Along with the court order, the attorney general is asking for policy reforms, as well as a monitor to be installed to oversee the NYPD’s tactics and handling of future protests.

The NYPD has been sharply criticized over a number of its officers’ actions in the past year. Last May, police SUVs were shown in a video of a protest in Brooklyn, surging into a crowd that had surrounded them. In another incident, an officer drew his gun and pointed it at a crowd of people.

And in July, plainclothes officers were seen on video as they “aggressively detained a woman at a protest and hauled her away in an unmarked vehicle,” as NPR reported.

“There is no question that the NYPD engaged in a pattern of excessive, brutal, and unlawful force against peaceful protesters,” James said. “Over the past few months, the NYPD has repeatedly and blatantly violated the rights of New Yorkers, inflicting significant physical and psychological harm and leading to great distrust in law enforcement.”

“With today’s lawsuit,” James said, “this longstanding pattern of brutal and illegal force ends. No one is above the law — not even the individuals charged with enforcing it.”

The police actions broke state and federal law, James says. The lawsuit alleges that New York City, Mayor Bill de Blasio, NYPD Commissioner Dermot Shea and NYPD Chief of Department Terence Monahan “failed to prevent and address the pattern or practice of excessive force and false arrests by officers against peaceful protesters in violation of the First, Fourth, and Fourteenth Amendments of the United States Constitution” as well as state laws.

James announced the lawsuit against the NYPD Thursday morning, in a virtual news conference that began shortly before New York Gov. Andrew Cuomo delivered his annual State of the State address. Cuomo called on James — who is elected, not appointed – to investigate NYPD’s response to the protests last May.

“Last night we saw disturbing violent clashes amid protests in Brooklyn,” Cuomo said when he announced his request for an inquiry. He added, “The public deserves answers and accountability.”

Last June, the NYPD suspended at least two officers for their behavior during protests, including an officer who was captured on video pushing a woman to the ground in Brooklyn. Another officer was punished for “pulling down an individual’s face mask in Brooklyn and spraying pepper spray at him,” as ABC7 New York reported.

Human Rights Watch, an independent watchdog group, issued a report last year on the police misconduct in Brooklyn which said that clearly identified medics and legal observers were among those zip-tied and beaten by police, in a response to the protest which was “intentional, planned, and unjustified.”

A Minnesota judge ruled this week that Derek Chauvin, the former police officer who kept his knee on Floyd’s neck for several minutes, will stand trial alone when proceedings begin in March. Chauvin is charged with second-degree murder and manslaughter.

“The NYPD has already been under the oversight of a federal monitor for more than six years. The federal monitor, Peter Zimroth, was ordered by the court to oversee sweeping stop-and-frisk reforms. The department’s work to reform stop-and-frisk practices, and address racial biases in policing, is ongoing. The monitor has not yet deemed the NYPD to be fully in compliance with reforms.”