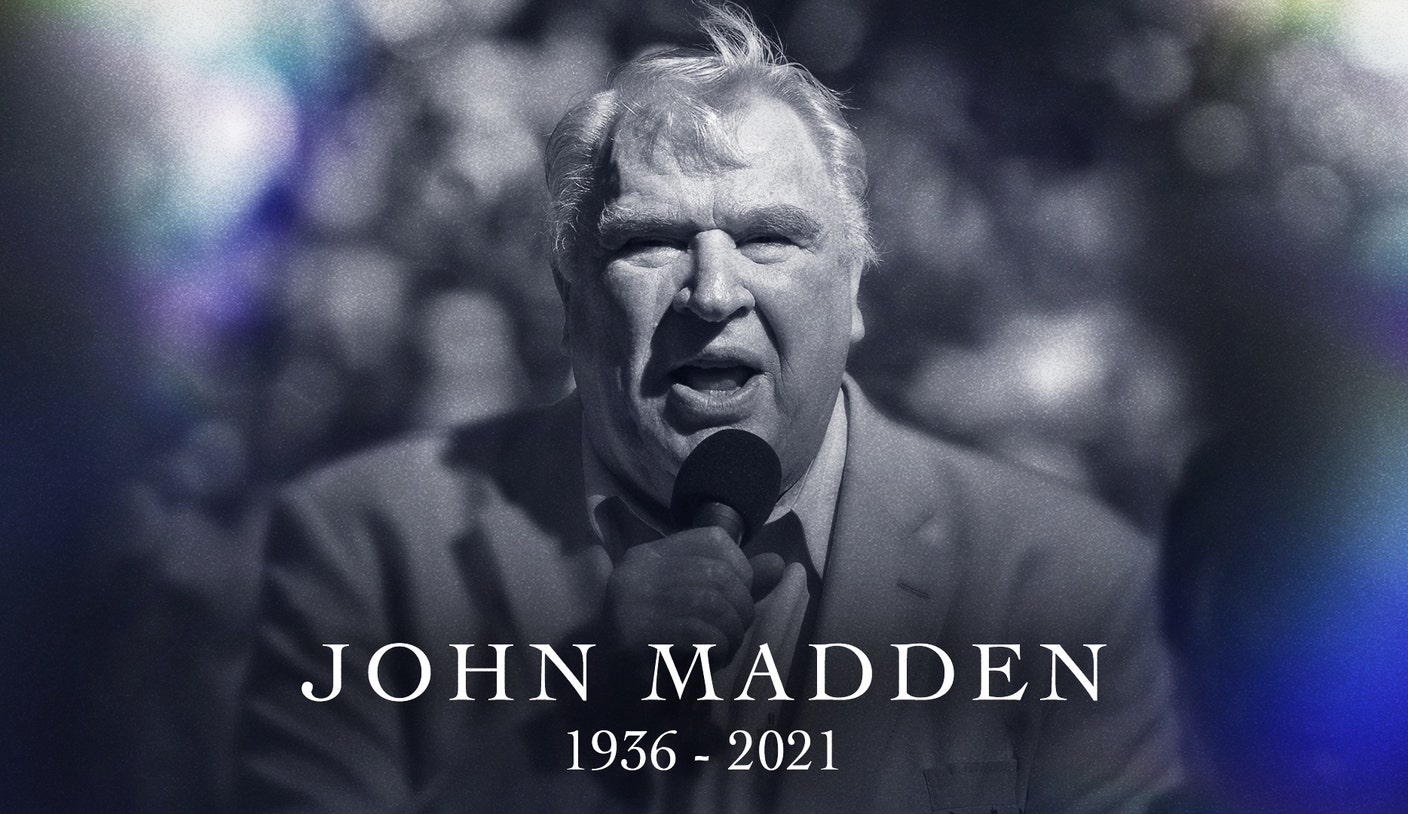 The NFL has lost one of its greatest legends. Hall of Fame broadcaster and coach John Madden died unexpectedly Tuesday morning at age 85.

“On behalf of the entire NFL family, we extend our condolences to Virginia, Mike, Joe and their families,” NFL Commissioner Roger Goodell said in a league statement. “We all know him as the Hall of Fame coach of the Oakland Raiders and broadcaster who worked for every major network, but more than anything, he was a devoted husband, father and grandfather.”

Coaching the renegade Raiders, Madden compiled a stellar 103-32-7 regular-season record and led Oakland to victory in Super Bowl XI after the 1976 season.

He became an even more impactful figure after he stopped coaching at age 42 in 1979, entertaining millions who tuned in to NFL football.

Most of all, he was the preeminent television sports analyst for most of his three decades calling games, winning an unprecedented 16 Emmy Awards for outstanding sports analyst/personality, and covering 11 Super Bowls for four networks from 1979-2009.

“People always ask, are you a coach or a broadcaster or a video game guy?” he said when was elected to the Pro Football Hall of Fame. “I’m a coach, always been a coach.”

In the “All Madden” documentary, released by FOX on Christmas Day, former players such as Brett Favre, Howie Long, Lawrence Taylor and Troy Aikman pay tribute to the greatness of John Madden.

He started his broadcasting career at CBS after leaving coaching in great part because of his fear of flying. He and Pat Summerall became the network’s top announcing duo. The pair moved to FOX in 1994, the network’s first season broadcasting NFL football, and Madden stayed with FOX through Super Bowl XXXVI in 2002.

“I am not aware of anyone who has made a more meaningful impact on the National Football League than John Madden, and I know of no one who loved the game more,” Dallas Cowboys owner Jerry Jones said in a statement.

Madden earned a place in America’s heart with a likable, unpretentious style that was refreshing.

“For me, TV is really an extension of coaching,” Madden wrote in “Hey, Wait a Minute! (I Wrote a Book!).”

“My knowledge of football has come from coaching. And on TV, all I’m trying to do is pass on some of that knowledge to viewers.”

His encyclopedic knowledge of the game, combined with a ceaseless desire to share that insight to educate the audience established him as the highest-paid broadcaster in sports. Coupled with his turn of phrase and sheer entertainment value, those enthusiastic interjections — “Boom!” — completed the package.

He also was the name behind the hugely popular sports video game, “Madden NFL Football.”

Madden’s career was honored in the recent FOX Sports documentary “All Madden.” The documentary will re-air Tuesday at 9 p.m. on FS1 and the FOX Sports App.

Dozens of NFL players, coaches and figures were interviewed for the documentary and “one thing that prevails is the level of awe across the board, from those of a similar era, those who played during his commentary heyday and more recent players, including Lamar Jackson, starstruck because of the ever-increasing popularity of one of the greatest video game franchises in history,” Martin Rogers wrote last week.

Madden was raised in Daly City, California. He played on both the offensive and defensive lines for Cal Poly in 1957-58 and earned his bachelor’s and master’s degrees from the school.

Madden was chosen to the all-conference team and was drafted by the Philadelphia Eagles, but a knee injury ended his hopes of a pro playing career. Instead, Madden got into coaching, first at Hancock Junior College and then as defensive coordinator at San Diego State.

Al Davis brought him to the Raiders as a linebackers coach in 1967, and Oakland went to the Super Bowl in his first year in the pros. He replaced John Rauch as head coach after the 1968 season at age 32, beginning a remarkable 10-year run.

With his demonstrative demeanor on the sideline and disheveled look, Madden was the ideal coach for the collection of castoffs and misfits that made up those Raiders teams.

“Sometimes guys were disciplinarians in things that didn’t make any difference. I was a disciplinarian in jumping offsides; I hated that,” Madden once said. “Being in bad position and missing tackles, those things. I wasn’t, ‘Your hair has to be combed.’”

The pinnacle came of his career came in 1977, when Oakland won it all with a 32-14 romp against Minnesota in Super Bowl XI.

“Players loved playing for him,” Hall of Fame offensive lineman Art Shell said. “He made it fun for us in camp and fun for us in the regular season. All he asked is that we be on time and play like hell when it was time to play.”

Here’s how the sports world reacted:

The Associated Press and FOX Sports’ Martin Rogers contributed to this report.