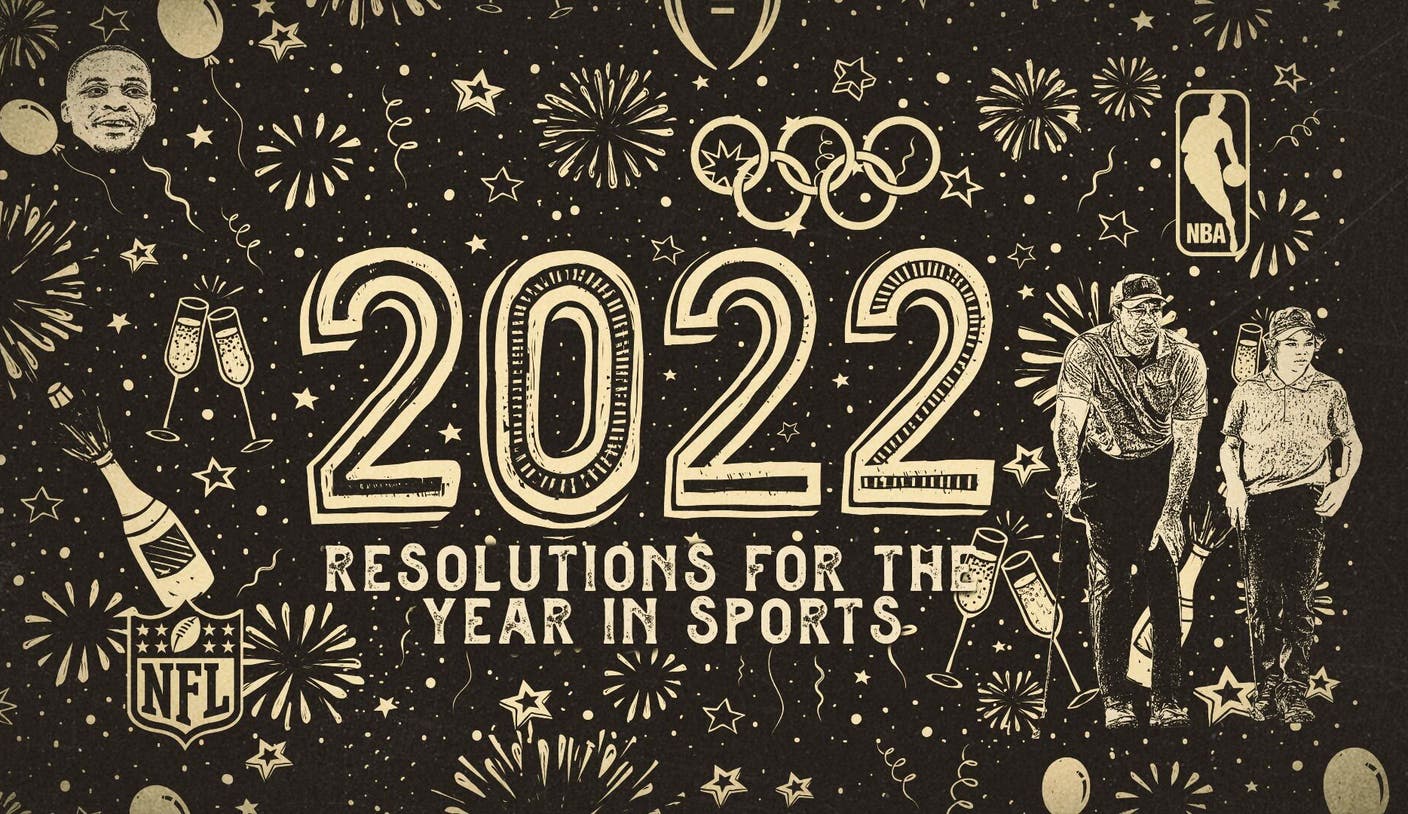 This is the time for resolutions, but I’ve never found a successful method for sticking to mine past the second weekend in January, and my personal list probably wouldn’t be very interesting.

So here, this year, is a list of things I’d like to see from the world of sports by the time 2022 is through.

Bill Belichick didn’t want to give his resolutions when prompted by a reporter with admirable bravery but questionable timing following last weekend’s New England Patriots defeat, but there is no such hesitation here.

It’s the final day of the year and, therefore, the final column of 2021, and there’s everything to look forward to.

Thank you, as always, to our loyal readers. Your support and dedication since this column started in the summer of 2019 always provide a stronger jolt of morning motivation than a double-shot of espresso.

Forgive me if many of the things below don’t come to fruition — resolutions are supposed to be aspirational, right? — but if some of them do, sports will be richer for it.

I hear the arguments against all this remarkable NFL parity — that it’s confusing and confounding and means there are no dominant teams. Sure, whatever, but this unpredictable season has reshaped our thought processes for the better. Even the most lopsided games on paper become legitimate watching options, and the divisional and wild-card races remain wildly entertaining entering the closing weeks. More, please.

College football’s playoff semifinals are tonight, and Alabama–Cincinnati and Michigan–Georgia will be a worthy way to end the year. But let’s hope 2022 brings further discussion about a bigger playoff — to either eight or 12 teams — to ensure that every deserving team, no matter its size or history, gets a fair chance to compete for a title.

‘We need to expand to 12 teams!’ – Brady Quinn and the “Big Noon Kickoff” crew on potential CFP expansion

The wish here is that when summer arrives, everyone will have forgotten that the Major League Baseball lockout was ever a thing. The ownership collective and the players’ association seem poles apart right now and haven’t talked economics for a month, sparking concerns that games will be lost and the season impacted. Who knows where the common ground lies, but know that I’m rooting hard for it to be found — and quickly.

Whether you are a Los Angeles Lakers lover or hater and a Russell Westbrook fan or not, let’s hope for an end to the sorry situation in L.A., where a future Hall of Famer is being embarrassed as part of a team with which he is a terrible fit. His salary will be difficult to offload, but his time with the Lakers is turning into a sad sideshow.

Shannon Sharpe: Russell Westbrook must stop thinking everything is fine when L.A. is the ninth seed I UNDISPUTED

The Los Angeles Lakers traded for Russell Westbrook hoping to ease the load on LeBron James’ shoulders. But it has been a struggle thus far for the purple and gold.

5. Cristiano Ronaldo gets to play a final World Cup

Ronaldo is not to everyone’s taste, but the World Cup just wouldn’t be the same without him. His Portugal squad are in serious danger of missing out and need to win two straight European playoff rounds to reach Qatar. Ronaldo has the biggest ego in soccer but remains a fascinating character and a truly elite superstar. At 37, this would be his last chance to play a World Cup, and if he fails to make it, we’ll all be worse off.

OK, Jake Paul, you’ve won me over (kind of) but let’s see some real blockbuster boxing fights in 2022 to go with the inevitable celebrity ones. Terence Crawford and Errol Spence finally need to make it happen, as do heavyweight belt holders Tyson Fury and Oleksandr Usyk. On the women’s side, Katie Taylor vs. Amanda Serrano would be a hugely anticipated showdown.

7. Coach K gets a fitting sendoff

I’m not silly enough to risk annoying everyone outside of Durham by hoping Duke wins the NCAA title in Mike Krzyzewski’s 42nd and final campaign. But Coach K deserves to go out in style, whatever that means. A run to the Final Four, narrowly falling in an Elite Eight overtime thriller or — to heck with it — even a dream run at a championship would be difficult to begrudge him, however hard you root against the Blue Devils.

Mark Titus and Tate Frazier call out three of the top five pretenders in college basketball this week, starting with Coach K on his farewell tour with the Duke Blue Devils.

Not everyone will love this, but the possibility of quarterback musical chairs in the offseason would provide some irresistible entertainment. Who wouldn’t be interested to see what Aaron Rodgers could do in Denver or Las Vegas, what Russell Wilson might conjure in Pittsburgh or any of the other new situations that those switches would surely set into motion?

9. Olympians get a fair shot

The Winter Olympics have snuck up on us, and truthfully, there is nowhere close to the normal level of public excitement. COVID has flared up again at the worst time for the Games, and it leaves me simply wishing that of the inevitable cases there will be in Beijing, none unfairly denies a medal hopeful the chance to compete for their ultimate dream.

PGA Tour, it is on you to make this happen. It doesn’t matter if you need to invent a whole new event — let’s get Tiger Woods and his 12-year-old son, Charlie, out on the course again for our televisual benefit. Watching Woods Senior in action again following that scary February car crash was uplifting, but seeing him interact with his mini-me at the recent PNC Championship was solid gold.

Martin Rogers is a columnist for FOX Sports and the author of the FOX Sports Insider Newsletter. You can subscribe to the newsletter here.