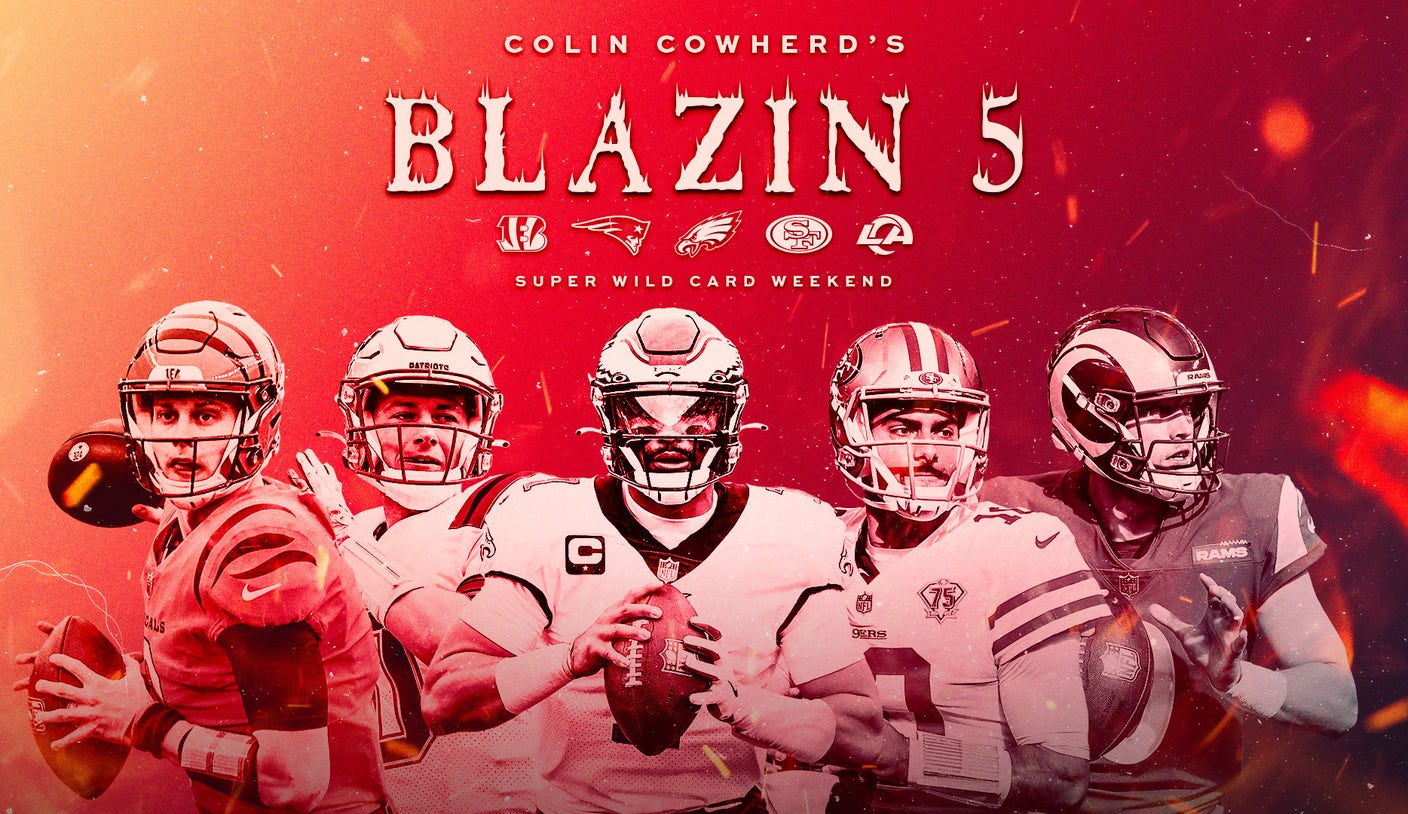 With the NFL postseason right around the corner, Colin Cowherd unveiled his picks for Super Wild Card Weekend.

Cowherd makes picks on five of the six games this weekend, including both games on Saturday: Las Vegas Raiders vs. the red-hot Cincinnati Bengals (4:30 p.m. ET, NBC), and the New England Patriots vs. the Buffalo Bills (8:15 p.m. ET, CBS).

For Sunday, he makes picks on the Philadelphia Eagles’ battle against the Tampa Bay Buccaneers (1 p.m. ET, FOX), as well as the renewed rivalry between the San Francisco 49ers and the Dallas Cowboys (4:30 p.m. ET, CBS).

Closing things out on Monday, the Arizona Cardinals take on the Los Angeles Rams in an NFC West showdown (8:15 p.m. ET, NBC).

Colin Cowherd makes his five best football picks for this week’s action in the NFL.

Here are “The Herd” host’s predictions, along with odds and win totals as presented by FOX Bet.

Colin’s thoughts: “Matchup of the team with the most penalty yards in the league, the Raiders, and a matchup of the team with the fewest penalty yards in the league, the Bengals. I also worry the Raiders’ defense was on the field for 90 snaps, and then they lose a day with travel. And Joe Burrow this year — you can look at the numbers — has been absolutely unbelievable. Completion percentage, No. 1 in the league. Passer rating, No. 2 in the league. The Raiders are the first team in NFL history that end a season with four-straight wins of four points or fewer. I kinda feel like the gig is up. They’ve also only scored 17 offensive touchdowns over the last 10 weeks. That’s the fewest among all playoff teams. I think a worn-down defense gets exposed in the second half. Bengals win and cover, 32-26.”

Colin’s thoughts: “I’m gonna take the points here with New England. [Bill] Belichick gets Josh Allen for a third time. New England has 24 rushing touchdowns, second-most in the league. It’s zero degrees. I don’t think there’s gonna be a ton of points, and I like four with New England. The Bills, by the way, are 0-5 in games decided by one possession. I told you, they’re Mike Tyson. They’ll knock you out early or lose close. And Josh Allen against the Patriots has not been very good. He has a 57% completion percentage. In fact, he’s only completed 63% on the year. That’s the second-lowest among all playoff quarterbacks, and that includes good weather games. I think it’s ugly. I think it’s low-scoring. … I’ll take the Bills to win on a late field goal, but this is my strongest play of the weekend. I like New England plus the points, 28-27, Bills win.”

Colin’s thoughts: “This is my second-strongest play of the weekend. I like the Eagles +8.5 (points). They don’t make mistakes, and [Tom] Brady does. … This is a fascinating one. If you look at the Eagles’ offense, they average almost 3.5 yards a carry before contact. That leads the league. That means there are holes open. They open things up. … Whereas Brady has 15 giveaways this year. That’s the most for him in 12 years. Tampa Bay is still banged up, does not have a consistent run game, the weather could be windy — that hurts the more vertical passing team. I think Tampa wins here, but 8.5 (points) against a team that consistently gets over 10 yards a carry, I think it’s close. Tampa Bay 27, Philadelphia 24.”

Colin’s thoughts: “Went back and forth. I gotta go with my initial instinct. I’m taking San Francisco, and the points and the upset win. Listen, the road team [has] won 10 of 14 wild-card games over the last three years. It’s the majority, and the offense for San Francisco leads the NFL — huge stat — in yards per play, 6.1. 49ers’ offense? Hottest it’s been all year. Three of the last four games, 150-plus rushing yards. And oh, by the way, all you Jimmy Garoppolo haters. … Here are the numbers post-Thanksgiving for Jimmy Garoppolo. Since Week 9, second in the league in completion percentage, first in passing yards per attempt, first in big passing plays. Since Thanksgiving, he’s a top-five clutch quarterback in the league. The Cowboys are 1-5 when they are held under 100 rushing yards, and it’s hard to get to 100 (yards) against the Niners’ defense. I like the Niners to win, 28-27, take the points.”

Colin’s thoughts: “I’ll take the Rams -4. A couple of things worry me. Arizona’s defense has not been good. Six yards a play surrendered in their last five games. And the Rams, 10 of their 12 wins [were] by seven or more (points). Like Buffalo, they get it going, they get a lead, they rarely lose. Kyler Murray is 1-4 over his last five games, and he has struggled against this Rams personnel regardless of who is the coordinator. Not only one win in his last six, but nine giveaways and a passer rating barely above 80. In this division, … the Rams tend to control Kliff Kingsbury and Kyler Murray. My weakest play of the week, but I like the Rams to win and cover, 31-26.”