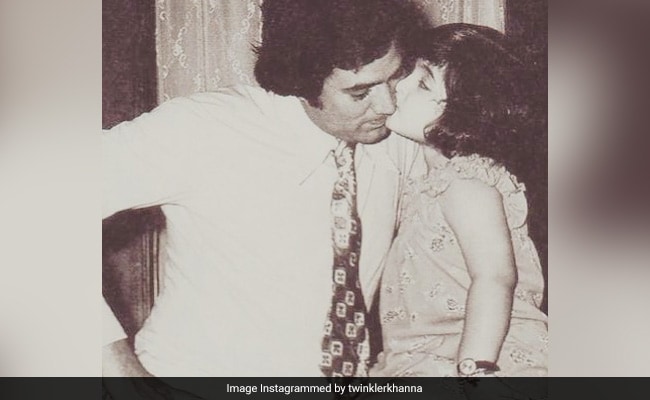 Wit and humour have been the usual motif of actress-turned-author Twinkle Khanna’s writings and social media posts. But birthdays ought to be different. Twinkle, who turned 48 today, shares her birthday with her father, late actor Rajesh Khanna. She made this day more special with a throwback black-and-white photo of the two of them that took us down memory lane. Twinkle wrote, “He always said I was the best present he could have ever received, as I tumbled feet first into the world on his birthday. A little star looking up at the biggest one in the galaxy. It’s our day together, now and forever.”

On this day, Rajesh Khanna would have turned 79. In the photo, we see little Twinkle Khanna kissing her father on the cheek while Rajesh Khanna smiles like a doting father.

Birthday wishes for Twinkle Khanna flooded in from ace designer Manish Malhotra, designer Farah Khan Ali, and producer Ayesha Shroff. Twinkle also received much love from her husband, actor Akshay Kumar, who shared a photo of both of them lounging on a hammock. Akshay captioned the image, “With you by my side, even the blues are easy to take in my stride… Happy birthday Tina.”

He also added the emoji of a face throwing a kiss. Birthday wishes can’t get mushier, can they?

The birthday came with surprises for fans of Rajesh Khanna. The day brought to us the news of a biopic of the legendary actor. Producer Nikhil Dwivedi announced a biopic titled Superstar. The film will be based on Gautam Chintamani’s bestseller book Dark Star: The Loneliness Of Being Rajesh Khanna. The producer is in talks with filmmaker Farah Khan for this project.

Rajesh Khanna is known for his roles in movies like Anand, Aradhana, Haathi Mere Saathi, Bawarchi and Amar Prem among others. He died in 2012 after a battle with cancer.