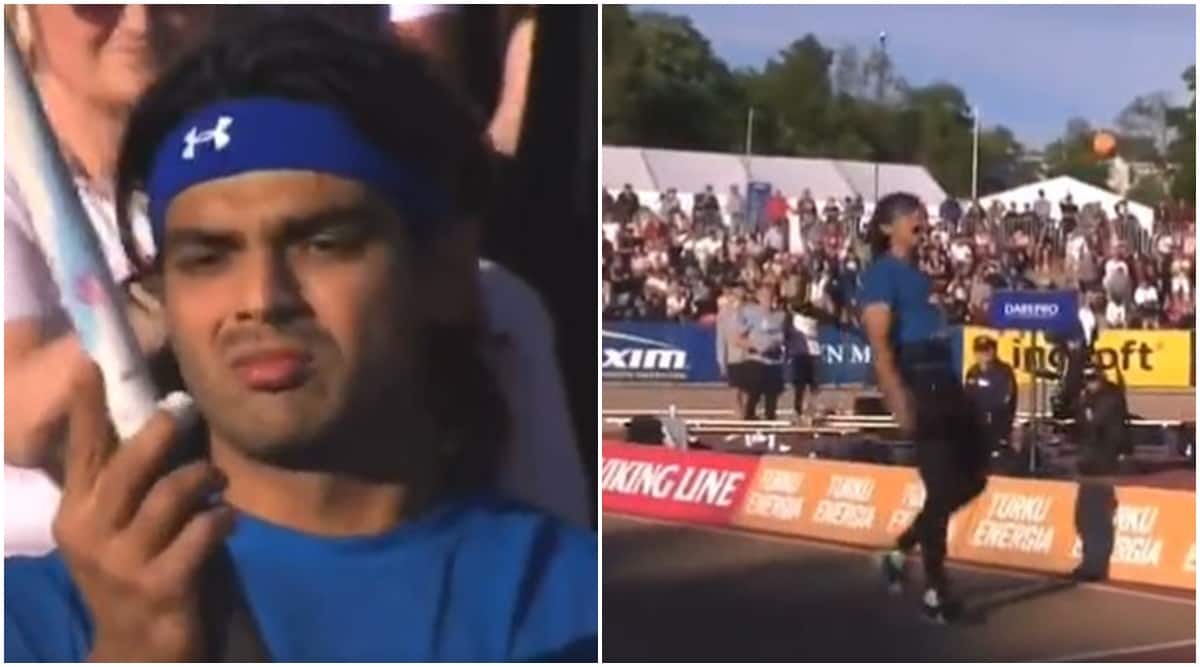 When he let the javelin fly on a humid Tokyo evening 10 months ago, Neeraj Chopra was convinced the throw that won him the Olympic gold was a National Record.

On his much-anticipated return to international competition, in Turku on Tuesday, Chopra let out a similar cry as the javelin pierced through the sunny sky of the Finnish city that’s considered the spiritual home of javelin throw. And just like his throw in Tokyo, he lifted both his arms to celebrate.

This time, it was indeed a National Record.

With only his second throw in international competition since the historic night in Tokyo, Chopra came up with an effort of 89.30m, thus bettering his own national record by more than a metre.

Setting records and how! 🤩#NeerajChoprapic.twitter.com/Yj1PShsZI7

Looking fit and competition-ready after staying out of action for nearly 10 months, more than all his competitors, the gigantic throw helped him finish second on the podium at the Paavo Nurmi Games behind home favourite Oliver Helander, who produced a personal best throw of 89.93m. World champion Anderson Peters of Grenada was third with a throw of 86.60m.

Chopra, whose first throw travelled a distance of 86.92m, could not manage a legal throw in his third, fourth and fifth attempts before finishing off with a throw of 85.85m. Yet, the result will come as a massive boost ahead of next month’s World Championships and also an affirmation that he is on the right track to breaching the hallowed 90m-mark.

Chopra’s 89.30 metres on Tuesday was the fifth best throw by an athlete this year.

For months after the Tokyo Olympics, the 24-year-old was away from the sport attending felicitation functions, shooting commercials and gracing talk shows before he could return to the place where he’s most comfortable: the athletics ground. He returned to the basics only in November, when he travelled to the Chula Vista training centre in the USA. Chopra reduced up to 14kg to get back to competitive shape and has been away from India since the start of the year to prepare for competition. The competition in Turku, in many ways, was a perfect precursor to the World Championships. It was a star-studded field, which included four out of the year’s five best throwers, including Peters, Jakub Vadlejch of Czech Republic, Germany’s Julian Weber and Trinidad’s Keshorn Walcott. Yet, Chopra – just like Tokyo – held his own.

Chopra had said in an interaction before the competition that his coach, Klaus Bartonietz, had planned that he should open his season with throws of about ‘86-87-88m’. The target, Chopra added, was in sync with his current fitness levels. To reach close to 90m, then, would please the athlete and his coach.
After easing into competition mode with an 86m-plus throw, Chopra produced an effort which was better than the one that won him the gold medal in Tokyo. Back then, his throw measured 87.58m, which made him India’s first track and field gold medalist.

He, however, has been in possession of the National Record in men’s javelin throw since 2016. His first shot at the national mark came during the 2016 South Asian Games in Guwahati, where he equalled Rajinder Singh’s effort of 82.23m en route to gold.

Then, at the U20 World Championships later that year, he took sole custody of the record with a throw of 86.48m, which also made him the first Indian track and field athlete to set the U20 World Record. His best attempt, before Tuesday, came at the Indian Grand Prix in Patiala in March 2021, where he recorded a throw of 88.07m.

On Tuesday, he improved on that with utmost ease. Chopra’s next target will be to breach the 90m-mark, which will elevate him to a select group of athletes who have achieved that.